Your questions about the family separation crisis at the border, answered 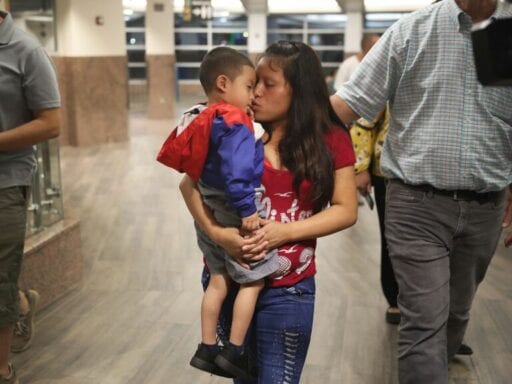 We hosted a discussion in our Facebook group The Weeds to answer questions about family separation.

The family separation crisis at the US-Mexico border, which started back in April, isn’t going away. The court-ordered deadline of July 26 for the government to reunite more than 2,000 families has passed — and although a majority of families are back together, some remain apart.

The government still says it’s reunited the majority of “eligible” families. But that all hinges on how they define eligible. In a few “ineligible” cases, the parent has a criminal record; in others, the child has already been released to a different sponsor (usually a relative living in the US).

In 463 cases, however, the family is “ineligible” for reunification because the parent has already left the US, after either being deported or accepting “voluntary” removal. The federal government is still trying to track down those parents — the American Civil Liberties Union has offered help via international NGOs — and is still obligated to find them, even though the deadline has passed.

It’s also important to note that the majority of parents who were just reunited have already received an order of deportation. For them, reunification is bittersweet — because it starts the clock on their imminent departure from the US.

Vox’s immigration reporter Dara Lind hosted a discussion in Vox’s Facebook group The Weeds, a space to discuss policy and politics, to talk about the latest developments in the lawsuit (filed by the ACLU in the Southern District of California) governing family reunification, how the administration is tracking where parents and children are, what factors determine whether parents can reunite with their children, and more.

You can find the full Q&A by joining our Facebook group and reading through the comments of the post. A few of her answers to people’s questions, lightly edited for length and clarity, follow.

How has the administration been tracking where the parents and the children are, who they are, and whom they’re related to?

After Judge Dana Sabraw ordered reunifications, they had to go back through all 11,800 or so “unaccompanied” children in Office of Refugee Resettlement (ORR) custody and figure out which of them had actually been accompanied when they entered the US, and match them to parents through a mix of checking identity documents, seeing what the case files said, checking case numbers (some children were given consecutive case numbers vis-à-vis their parents), DNA testing, etc.

What did Judge Sabraw say this weekend re: deported parents?

Sabraw ordered on Friday that the administration give the ACLU a list of all deported parents by Wednesday, August 1 (as well as all reunited families and all families it’s deeming “ineligible” earlier in the week). The ACLU is treating this as a) a victory because the government had opposed doing that, and b) an opportunity for them to work with organizations on the ground to track down these parents.

Will there be a readout of the conversations between Judge Sabraw and the parties now that these court sessions are moving to phone calls?

Some of these status conferences are private, some are public. The private ones don’t get transcripts we can see; the public ones get transcripts, but it takes a few days (and a PACER subscription) to get them. Basically, just keep following me, Elise Foley, Jacob Soboroff, Tal Kopan, etc. on Twitter.

What is the probability that some kids end up permanently in the US foster care system — with or without the consent of their parents?

Extremely high, near certain. Because some parents are making the choice (or at least trying to make the choice!) to leave their children in the US when they’re deported so that the child can pursue his own legal case, rather than withdrawing the child’s case when the parent loses her own.

It’s extremely [likely] that at least a handful of kids will end up in the system who wouldn’t have been if their parents had had a real choice. But I’m honestly not sure how many that’s going to be, and I’d be surprised if it were more than a few dozen. (That might sound really callous, but given that at one point, we were talking about 3,000 separated families, it’s worth keeping in perspective.)

To what extent should some children legitimately not be reunited with their families due to safety concerns?

We just don’t know. This has been one of the points of dispute in the ACLU suit that’s currently on the back burner but might pick up this week as the government turns over more info — including which parents have been deemed ineligible for reunification and why.

The especially tricky thing here is that some parents were separated from their children (including at ports of entry) because United States Border Patrol officials determined there was “insufficient documentation” to establish a family relationship. I continue to have questions about whether those families will have a harder time getting reunited. But if the government does end up overruling those determinations, it’s hard to imagine that they will end up reuniting every one of the legitimate families without turning over anyone to a fraudulent relative.

Of course, not all fraud is trafficking, and from what we can tell, the risk of getting turned over to traffickers from the standard Office of Refugee Resettlement sponsoring process appears to be nearly as high, if not as high, as the number of kids coming over with traffickers as “family units.”

What are other grounds, besides the lack of documentation that you mentioned, for ruling ineligibility for reunification?

Here’s a screenshot from the latest government status update (Thursday, July 26); the document is available here.

Are there stories of ICE agents being fired, disciplined, or prosecuted for their behavior?

No, and it’s really hard to tell if absence of evidence is evidence of absence.

Internal affairs investigations take a long time and are usually conducted pretty quietly. There probably could be investigations going on that we don’t know about. On the other hand, the Trump attitude of “Respect ICE” trickles down to at least internal communications — I’ve seen a couple of emails from Homeland Security Secretary Kirstjen Nielsen to DHS staff that are basically, “This is a hard job but you guys are effing heroes,” over the last couple of weeks. So it wouldn’t surprise me if investigating misconduct wasn’t a priority.

Any word on how likely it is that the administration will comply with the new Wednesday deadline to provide a list of the 650 “ineligible” parents?

In general, the government has complied with informational deadlines, and has come close enough to complying with action deadlines for Sabraw to deem them in “good faith.” To the extent that a “how likely is it they’ll comply” question is “how likely is it that they’ll be found officially compliant,” the answer is that it’s certain.

Generally: Immigration court –> Board of Immigration Appeals (the quasi-appellate body that Attorney General Jeff Sessions has been rewriting a bunch of precedents for) –> US Court of Appeals –> Supreme Court. It is an absolute mess.

Why this litigation is happening in federal court: This isn’t litigation on the outcomes of the immigration cases; it’s [a suit accusing] the government of constitutional violations for engaging in the family separation policy.

Do we understand the long-term psychological and developmental impact that being separated and placed in a cage as a child may have? Or for parents?

As it happens, I did an interview in June that answers exactly this question: “A recipe for toxic stress”: an expert on why Trump’s family separation policy is so damaging to kids.”

Read the full Q&A discussion in Vox’s Facebook group for The Weeds.

Why are brands so bad at apologizing?
The John Travolta Gotti movie is waging a Trump-style war on critics
Stephen Miller's D.C. home a target of immigration policy protest
Officers shot and killed a black teen. They won’t be charged because of a “fleeing felons” law.
Trump says he’ll reopen the economy “based on a lot of facts and a lot of instincts”
Far more women than men want to see Trump impeached