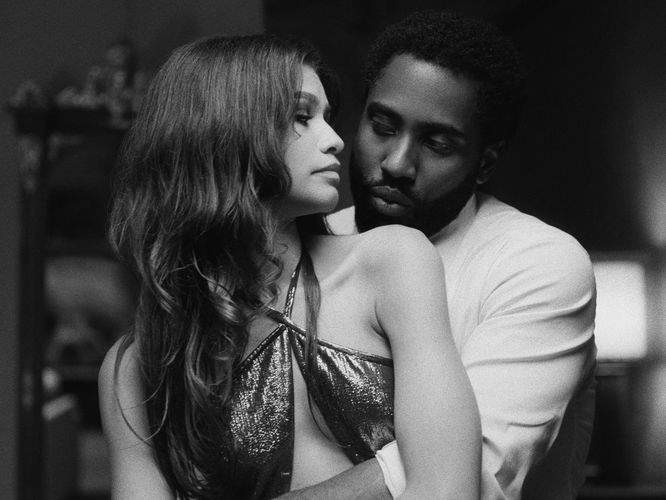 The new Netflix drama is all talk, but it has very little to say.

Malcolm & Marie obviously intends to be a movie worth talking about. Talking is all that its two main (and only) characters do. A talk-heavy movie can be fantastically energizing to watch. Conversations reveal character and spin out ideas. And listening to people argue, banter, and rant can be one of the more intellectual joys of cinema.

So why does Malcolm & Marie have so little to say? Somehow, an intriguing premise and two dynamic performers aren’t enough to save this movie from its almost unbearable tediousness. Writer and director Sam Levinson wrangled a way to film Malcolm & Marie in June and early July 2020, pairing his Euphoria star Zendaya with John David Washington at the famous Caterpillar House near Carmel, California. Shot in lush black and white by cinematographer Marcell Rév, it’s one of the earliest films to wrap production amid Covid-19 conditions. That’s probably enough to ensure it will be at least a footnote in history.

The movie is pretty to look at, and its stars are great. But here is the thing: It’s just really dull.

Washington plays Malcolm, a filmmaker with a lot of big aspirations — and the memory of earning mediocre reviews for previous projects rankling his soul. Zendaya is his girlfriend, Marie, whose past addictions may or may not have something to do with the premise of Malcolm’s new movie. The pair have returned to the house they’ve been living in following the premiere of that movie, and Malcolm is elated enough to put on James Brown’s “Down and Out in New York City” and start dancing. Marie seems less than pleased.

The pair start talking, then arguing, and this is where the trouble comes in. To write a good argument requires some virtuosity — most people don’t really enjoy listening to others bicker, especially people they don’t know or have any reason to care about. We just met Malcolm and Marie, and the only reason we have to invest ourselves in them is that they’re on our screens right now. Is that enough?

Not really. Malcolm & Marie’s screenplay makes the odd move of having Washington launch into a rant, straight out of the gate, about film critics. Which, sure; film critics are insufferable, and I know this because I am one. But the manner and matter of his complaints are entirely related to how critics do or do not understand his work specifically, or cinema — put it in air quotes to catch the tone — more broadly, which really only establishes that Malcolm is more annoying than most critics.

So the age-old question of whether critics are just failed filmmakers turns up early in the movie, which then keeps transitioning into other age-old questions. Does an artist bear responsibility to those from whom he draws inspiration? How much does life inform art? How much should it inform art? And is being great a worthy goal if it sacrifices being good to the people around you?

If you’re going to raise these big questions, you’d better have some kind of plan to debate them in an interesting way. Malcolm & Marie does not. Zendaya and John David Washington are both performers who could compellingly read a phone book to an audience, and they go a long way toward keeping these questions from feeling entirely pointless, though they never give much of an answer. Their all-night argument unfolds in a familiar rhythm: an accusation or question sends long-simmered resentments bubbling to the surface, and then a little silence before things flare again. Marie isn’t just mad that Malcolm forgot to thank her on stage at the premiere; she’s mad that his oversight is one in a long series of grievances and sleights.

In the hands of a stronger writer, Malcolm & Marie could have taken its cues from great theater two-handers, duets designed to showcase their actors. It could have explored Malcolm and Marie’s power dynamics in a way that keeps the audience on their toes, electrified by the shifting sands beneath their feet. Instead, the movie strangely feels like a dip into its writer’s psyche as it wars with itself, revealing that neither side has progressed past classroom arguments in a junior-year art history course. The feeling of listening to someone say things you have heard a thousand people say before is not illuminating or interesting. It is maddening, mostly because it’s a waste of time.

Occasionally Malcolm & Marie flirts with thoughtfulness, particularly when it makes fun of the way (white) critics’ favorite approach to films starring Black actors is to immediately cast the plot in terms of race. But like every other question it raises, the film lets this one die on the table, glanced at but not really examined, or maybe even understood. That means it closely resembles many real fights — anyone who’s been in a long relationship knows something about that. But it doesn’t really justify making anyone relive it, even when the players are as great as Zendaya and Washington.

All of that is a film, and a filmmaker’s, prerogative. And Malcolm & Marie is an interesting experiment in Covid-era filmmaking, to be sure. But it has the quality of trying to stave off any critique by making the person doing the critiquing — whether a film critic or just a regular audience member — feel as though their criticism proves something bad or deficient about their own taste, opinions, or proclivities. That might be a way to win an argument with your girlfriend, but it’s not much of a way to make art.

Malcolm & Marie is streaming on Netflix.

Trumpworld’s “the media is trying to cause a recession” conspiracy theory, explained
The US will revoke visas for Saudi suspects in Jamal Khashoggi’s killing
How Oprah Winfrey became our interviewer in chief
The past 72 hours of Brexit ridiculousness, explained
In his new memoir, Obama defends — and critiques — his legacy
This AI makes you look like a masterpiece — while teaching you about its own bias