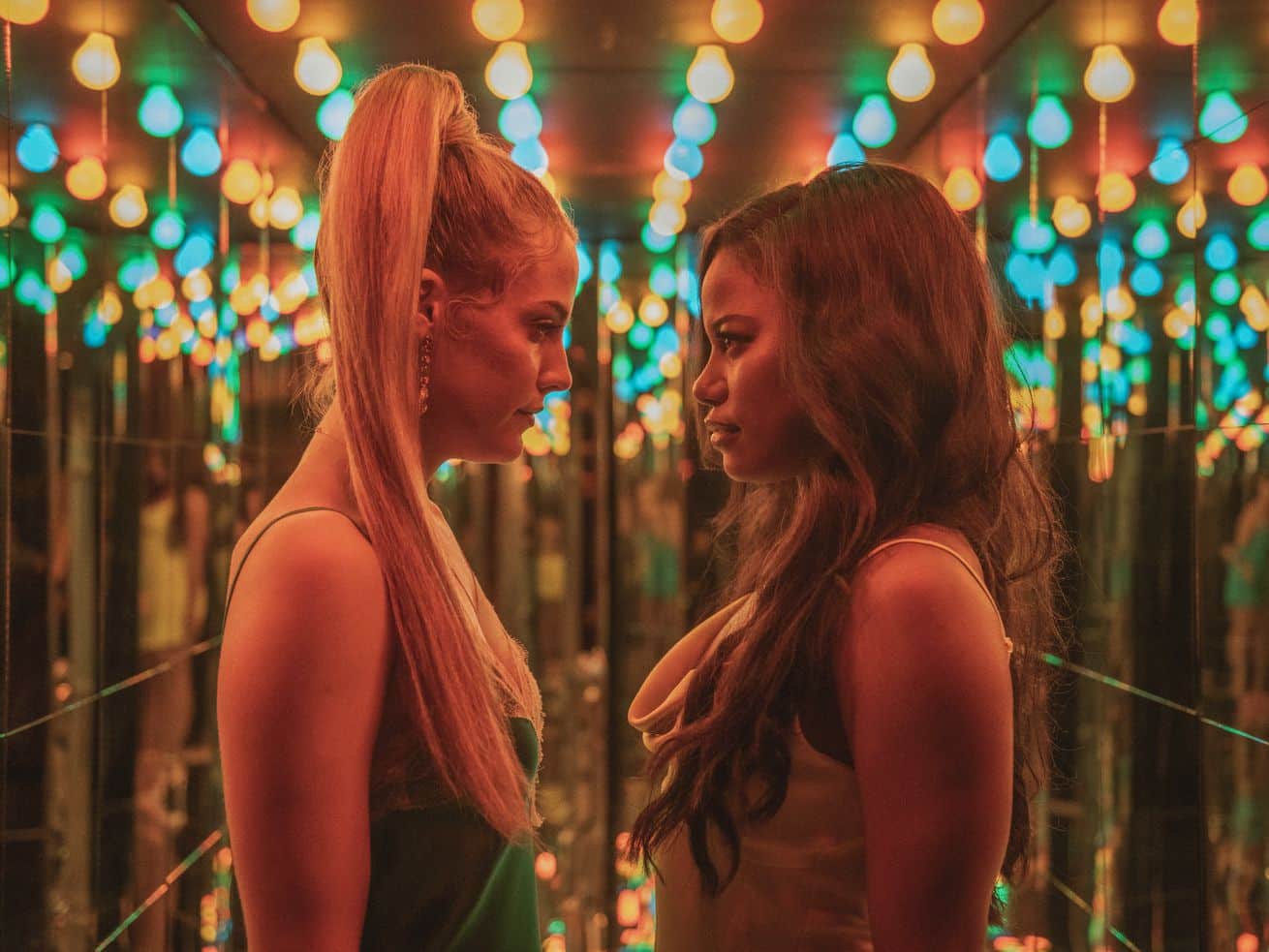 The new movie brings a viral tweetstorm to life with absurdist, madcap glee.

Early on in Zola, the stylish and glitzy new movie adapted from a viral 2015 tweetstorm by A’Ziah “Zola” King, our heroine falls in love.

Zola (Taylour Paige) is a waitress at the kind of chain restaurant that makes all its waitresses wear miniskirts; she also moonlights as a stripper. She marches through the world with steely self-possession, and the first time she sees Stefani (Riley Keough) sidle into her restaurant, Zola is not impressed. Stefani is a white girl decked out in an aesthetic borrowed from Black women: long fake nails, long weave, baby hairs arranged in immaculate swirls, blaccent to the fore. Zola, who is actually Black, looks Stefani up and down with polite disdain and mentally discards her.

But then Stefani corners Zola on her own. She’s sure she recognizes Zola from somewhere, Stefani says. Is Zola maybe a stripper?

“I dance,” Stefani explains, with just a little edge of defensiveness in her voice.

“Okay, bitch,” says Zola, with newfound respect, “me too.”

The two women reconsider each other. They are, as King wrote in her original tweetstorm, “vibing over [their] hoeism.” As they gaze into each other’s eyes, a little red heart pings onto the screen into the space between them. Love, social media style.

It’s a witty moment, the kind of touch at which Zola writer-director Janicza Bravo and co-screenwriter Jeremy O. Harris excel: This story, it’s clear, is a digital native through and through, in ways that inflect the way it understands and depicts love. But the little red heart also sets up the emotional underpinning of everything that’s to come. Because Zola is, fundamentally, the story of a friendship betrayed. It’s the story of realizing that someone you thought was not just an ally but a soul mate is actually ready and willing to exploit you.

Or as King put it in her iconic tweet, and Paige recites with deadpan solemnity in the film’s first line: “Y’all wanna hear a story about why me & this bitch here fell out??????? It’s kind of long but full of suspense.”

Stefani invites Zola to come stripping with her for the weekend at a club in Florida, where easy money is guaranteed. Her roommate and her boyfriend will come along for the drive and set them up with a place to stay, she promises.

As the weekend goes on, however, it becomes clear to Zola that Stefani’s roommate, X, is actually her pimp. Stefani didn’t bring Zola down to Florida just to strip; X wants the two girls to spend the weekend working as escorts, and Stefani appears more than willing to play along. Stefani, in fact, seems to have served Zola to X on a silver platter.

Zola has a tricky tonal line to walk here. This movie wants to be a sleazy-fun joyride, to capture the madcap “what the fuck did I just read” energy that made King’s original tweetstorm a sensation. King wrote her story in 148 tweets before Twitter even had threads, so people passed around the tweets in screencaps to make them readable, and it still trended under multiple hashtags: That’s the kind of unstoppable force of nature the film is dealing with.

But Zola is also a story about sex trafficking, which makes it difficult to delve into juicy drama without also feeling gross and exploitative. Some of the victims of X and Stefani’s real-life equivalents have already made their displeasure with this movie known.

Bravo’s solution to this tonal problem is to keep her focus firmly on Paige as Zola. Zola’s dubiously arched eyebrows as she watches Stefani trash-talk another girl’s “nappy-ass weave” speak volumes, and she maintains her own boundaries throughout the film with an iron will that comes to seem heroic.

The supporting cast around Paige is just as solid. As X, Colman Domingo veers ably back and forth between affable charm and unhinged violent threat. As Stefani’s hapless and cuckolded boyfriend Derrek, Nicholas Braun rolls out another version of his breakout performance as Succession’s Cousin Greg: so tall, so sweetly unable to do anything quite right.

Keough, meanwhile, makes Stefani into a slippery force of nature. Like Zola, you can never quite get a handle on her. At times she seems to cower before X in terror, a victim just like Zola, and at other times she seems as callous and manipulative as X himself is. Her eyes, squinting out from behind her Lolita sunglasses and piles of pink eyeshadow, seem too empty and glazed to read anything into.

That’s part of the point. Bravo likes to frame Stefani and Zola standing in front of mirrors together, gazing at each other’s reflections. They mirror each other, too: They reflect each other’s deepest fears and most hidden desires. It’s hard to read Stefani, in part, because our narrator Zola wants it to be.

As slick and stylish as Zola is, not all of its many flourishes land. The repeated conceit of having the “new tweet” sound go off in the background every time someone says a line from King’s original tweetstorm is at first funny, then distracting, and then finally lost in the background. The underwritten ending arrives so abruptly that it could give you whiplash.

It’s a case where Bravo and Harris might have done better to lean on King, who included a “here’s where they all ended up” epilogue in her tweetstorm. She knew her readers would need some kind of closure after the ride she had just taken them on, and she was ready to provide it.

“And that’s the end of that,” King concluded, back in 2015. “If u stuck wit that whole story you are hilarious lol.” If you stick with Zola to the end, you’ll feel marvelously unsettled.

Giuliani: FBI, prosecutors investigating Trump belong in the psych ward
Travel ban timeline: 17 months, three versions, two appeals courts, one Supreme Court
Democrats turn to Hollywood for messaging help
26 feet of water: What the worst-case hurricane scenario looks like for Tampa Bay
Trump: Manafort is a “good man” and the conviction is “very sad”
The Goldfinch shows the perils of being too faithful to the book