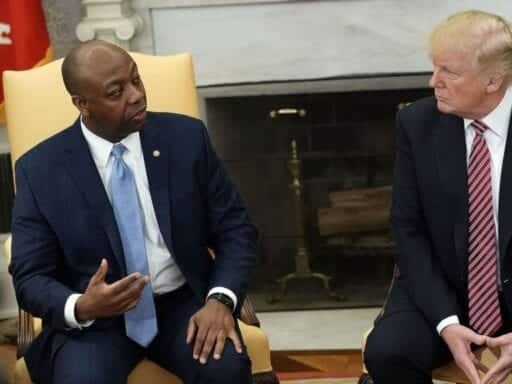 Sen. Tim Scott, the GOP’s lone African-American senator, was among those to voice opposition.

Senate Majority Leader Mitch McConnell withdrew the nomination of Ryan Bounds for a US Circuit judge seat on Thursday after at least one Republican senator raised concerns about the way Bounds talked about race in his past writings.

“There were some objections raised by Sen. Scott that couldn’t be resolved in the short time we had, so the White House decided to withdraw the nomination rather than have the nominee lose,” said Senate Majority Whip John Cornyn.

According to Politico, Sen. Tim Scott, the sole African-American member of the Senate’s GOP conference, sounded the alarm about Bounds’s college writings — many of which included demeaning statements on diversity and multiculturalism, per a report compiled by the Alliance for Justice. Scott was then reportedly able to convince Sen. Marco Rubio (R-FL) to oppose the nomination as well.

“After talking with the nominee last night and meeting with him today, I had unanswered questions that led to me being unable to support him,” Scott said in a statement.

What Ryan Bounds wrote that got him into trouble

Bounds’s college writings included numerous articles for the Stanford Review in which he spoke disdainfully about diversity, with one piece serving as a cautionary tale against the perils of growing multiculturalism.

“I submit that the Multiculturalistas, when they divide up by race for their feel-good ethnic hoedowns, engage in nearly all of [the fundamental behaviors of groupthink],” Bounds wrote in an editorial that detailed his opposition to “ethnic organizations.” “The existence of ethnic organizations is no inevitable prerequisite to maintaining a diverse community— white students, after all, seem to be doing all right without an Aryan Student Union,” he added.

Among some of his other controversial writings, Bounds also argued that the “burden of proof” needed to be higher in sexual assault cases — and noted that expelling an alleged rapist would not be beneficial to victims. “There is nothing really inherently wrong with the University failing to punish an alleged rapist—regardless his guilt—in the absence of adequate certainty; there is nothing that the University can do to objectively ensure that the rapist does not strike again,” he wrote.

Democrats want to make this about Kavanaugh’s nomination

Democratic leadership immediately capitalized on Bounds’s withdrawal as a means of advancing the case against Supreme Court nominee Brett Kavanaugh. In recent weeks, Democrats have increasingly argued that Kavanaugh’s copious paper trail needs to be studied in its entirety — an archive that could include writings as far back as his college days.

“Republicans just sunk the Bounds nomination based on his college writings,” Senate Minority Leader Chuck Schumer’s communications director Matt House said in a statement. “After that, how are they going to argue that Judge Kavanaugh’s White House papers aren’t relevant to his nomination to the Supreme Court?”

Democrats — who reportedly cheered when Bounds’s withdrawal was announced — were also seemingly heartened by the fact that a “bad nominee” got booted at all. It’s very rare, after all, that a nominee gets withdrawn.

Ryan Bounds flagrantly misrepresented his background, lying to cover up disturbing, intolerant writings from his past & in my view, that means he’s disqualified from sitting on the federal bench. Here’s the bottom line: today, constant pressure against a bad nominee won out.

“I’m the child of Jewish refugees who fled Nazi Germany,” Sen. Ron Wyden (D-OR) wrote in a tweet. “To read what Mr. Bounds wrote was a slap in the face & I imagine there are millions of people across the country who would feel the same way.”

The Supreme Court has delivered a devastating blow to the US asylum system
Fact check: Did the Obama administration separate families?
The lie of “expired” food and the disastrous truth of America’s food waste problem
Colorado primary election 2018 live results: governor and key House races
In MLK’s day, conservatives didn’t think he was so “civil”
President Donald Trump stumps for South Carolina governor; talks about himself

The US is bracing for a potential Haitian migrant crisis. Biden needs to step up.