Congress failed to do something on immigration — again. Here’s why. 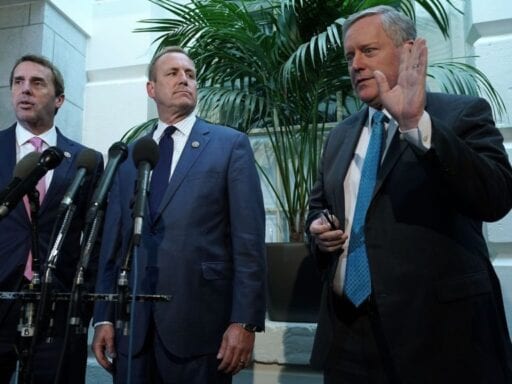 Why there’s no path to a Republican compromise on DACA.

Without having reached any meaningful solution, Congress’s debate over the future of the Deferred Action for Childhood Arrivals (DACA) program is likely over for the foreseeable future.

For the past few weeks, Republicans have been furiously negotiating among themselves to develop a “compromise” between conservative and moderate Republicans on immigration. Last week, they failed — by a long shot: The bill, which was fairly conservative in policy, lost the support of every single Democrat and 112 Republicans.

House conservatives voted against the Republican-led proposal en masse, making it clear that there’s very little by way of Republican “compromise” that can receive their support.

The final vote “made it very obvious that we need to have a bipartisan solution,” Rep. Jeff Denham (R-CA), one of the leading moderates at the negotiating table said after the bill failed to pass. “There are a number of Republicans that will never be able to get to ‘yes’ and certainly there are Democrats that are willing to work with us for a solution.”

This is the second Republican immigration bill that’s failed to pass the House in the past two weeks. As it stands, there’s very little belief that the House can negotiate immigration in good faith. Democrats just saw the Republicans they’d worked with for months on bipartisan proposals abandon them for a conservative proposal that still failed. And centrist Republicans feel their conservative colleagues took them for a loop, convincing them to walk away from bipartisan talks, only to tank the final deal. The entire exercise seemed almost doomed from the start.

Months away from a contentious midterm election that could dramatically alter the party power make-up of the House, DACA seems like the last immigration issue that will see a congressional solution.

The attempt at a Republican “compromise” immigration bill was one championed by House Speaker Paul Ryan, conservatives, and moderate Republicans.

It included a litany of conservative policy proposals, modeled after the White House’s demands. It would have given DACA-eligible immigrants temporary legal status for six years, after which they could apply for — but would not be guaranteed — a green card. It was a merit-based partial path to citizenship was a proposal crafted by conservative House Freedom Caucus co-founder Rep. Raul Labrador (R-ID).

The bill also called for granting $25 billion in funds for a southern border wall, making it more difficult for migrants to seek asylum, and allowing families to be detained indefinitely at the border in response to the Trump administration’s “zero tolerance” family separation policy. It also included provisions that would have significantly cut legal immigration levels.

Conservatives, including Labrador and most of the Freedom Caucus, still voted against it. In the process, conservative leader Rep. Mark Meadows (R-NC), who chairs the House Freedom Caucus, made some enemies. According to a Politico report, at the start of negotiations, Meadows “lavished praise” on moderate Republicans, convincing many that they would participate in a real compromise. But as a vote neared, conservatives willingness to sign onto anything short of their demands unraveled.

“The Freedom Caucus people just kept negotiating themselves out of a deal,” Rep. Ryan Costello (R-PA), who had signed the discharge petition earlier this month, told Politico. In the end, Meadows admitted it came down to politics.

“All the people back home are going to see is the 1.8 million people, or more, are eligible for citizenship,” Meadows told Vox, saying how the perception of the compromise mattered more to conservatives than the actual policy.

This is the core of the impasse on immigration policy for Republicans. Conservatives, galvanized by Trump — a president who is known to espouse hardline immigration views, claiming migrants are “infesting” and “invading” the country — are unwilling to make any concessions. They have enough votes in the House Republican conference to tank any bill being pushed on a party-line vote, and they only have to answer to a voter base excited by hardline anti-immigration views.

They have no incentive to “compromise.”

Hardline conservatives demands matter because Trump has prioritized them

Trump’s interest in the House’s immigration debate was muddled. In the span of two weeks he came out against a Republican “compromise” immigration bill, expressed support for both the “compromise” and a more conservative version of the policy, told Republicans to stop “wasting time” with negotiations altogether, then hours before the vote endorsed the final GOP “compromise.”

The Guardian’s Ben Jacobs captured Trump’s erratic positions in a tweet this weekend:

But outside of the House’s negotiations, Trump has made his ideological positions on immigration policy pretty clear: He and his administration have repeatedly turned to conservative immigration hardliners like Sens. David Perdue (R-GA) and Tom Cotton (AR), and Reps. Bob Goodlatte (R-VA) and Meadows in the House, who have been working on extremely partisan immigration proposals that have no chance of passing the Senate.

Trump has done two things: He has both continued to force Congress’s hand on immigration issues from DACA to family separations at the border, and maintained a position on the issue that doesn’t lend itself to making law.

It makes the path toward a solution near impossible.

Moderate Republicans don’t many viable options for a path forward

There was a clear sense of frustration and anger among moderate Republicans by the end of this week; it was a “missed opportunity,” GOP lawmakers were heard lamenting to each other.

Publicly, many moderate Republicans decided to blame Democrats for their GOP “compromise” bill’s failure. Privately, they knew this bill was a Republican failure.

Neither proposal was designed to receive Democratic support. Democrats were not involved in negotiations or drafting the proposal. They were not allowed to offer amendments to the final product at any time in the process. There’s no getting around it: This was about Republicans and Republicans only.

Now, moderate Republicans have no option but to try to regain the trust of their Democratic colleagues.

“We are going to look at every option that we have to bring a bill to the floor,” Denham said, admitting their options are limited. House Republican leadership — a.k.a. House Speaker Paul Ryan — has shown a reluctance to allow votes on bipartisan immigration bills on the floor.

Moderates could choose to pursue another discharge petition, a legislative maneuver that would force votes on pieces of immigration legislation if it gets 218 signatories. But due to House rules, they’d have to gather support for the petition and file it within a week.

These moderate Republicans came two GOP signatures short of forcing votes on several bipartisan immigration bills when they tried to push a discharge petition earlier this month. One of the signatures on the first petition (former Pennsylvania moderate Charlie Dent) has already left Congress. And having just failed to pass two immigration bills, others on the original petition have voted on the legislation they wanted to throw their support behind.

The path to a DACA fix looks like it has hit a dead end. At least until the composition of Congress changes.