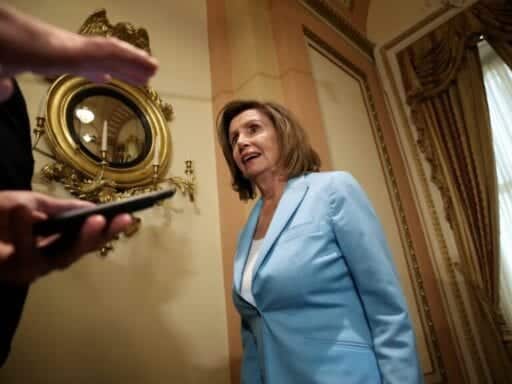 Share
Loading...
Speaker of the House Nancy Pelosi (D-CA) departs a signing ceremony for a newly passed budget agreement at the US Capitol July 31, 2019, in Washington, DC.  | Win McNamee/Getty Images

The proposal would enable the HHS secretary to negotiate directly on as many as 250 drugs.

House Democrats have officially introduced their big prescription drug pricing plan, but it’s unclear just how much traction it can get in a divided Congress.

Speaker Nancy Pelosi unveiled the proposal on Thursday in a bid to address one of Democrats’ chief 2018 campaign promises: Last fall, lawmakers across the country pledged to bring down the increasingly exorbitant prices voters face for different medications.

According to a summary shared by Pelosi’s office, the Democrats’ proposal would mark a major shift in the way prescription drug prices are set in the US by empowering the federal government to directly negotiate drug prices for Medicare recipients as well as others purchasing the drug.

Under current law, the Health and Human Services Secretary is barred from engaging in negotiations for prescription drugs covered by Medicare, an arrangement established in 2003 as part of the Medicare Modernization Act that set up Medicare’s prescription drug benefit. Presently, private plans that offer Medicare Part D benefits negotiate drug costs independently. But they often lack the leverage to secure the kinds of reductions the government may be able to obtain, given its bargaining power.

Although President Donald Trump has previously expressed interest in getting something done on drug prices, it’s not certain this Democratic plan is something he will get behind. The Democrats’ proposal would significantly expand the government’s role, a move that many Republicans have been wary of in the past. It’s one of several plans lawmakers have floated to curb prescription drug prices, and the latest sign of just how much voters are pushing this issue.

House Democrats’ plan has been through quite a few iterations to get here — and it ultimately reflected input from across the caucus, including pushback leaders previously faced from the party’s progressive wing.

The final bill enables the HHS secretary to negotiate the prices of as many as 250 drugs, a much higher number than the 25-drug threshold the speaker’s office had outlined in one of the earlier versions of the plan. Additionally, it would penalize companies that do not negotiate with HHS with a fine that starts at 65 percent of a drug’s gross sales from the prior year. For every quarter that the company does not engage, the penalty goes up by 10 percentage points, until it hits 95 percent of a drug’s gross sales.

The drugs the HHS Secretary would prioritize under the plan are ones that are currently most costly to Medicare and the broader health care system, which do not have competition in the form of a generic or biosimilar. These drugs would be identified based on their price and volume of sales and at least 25 would be negotiated on each year.

Whatever price is negotiated by HHS will be available to individuals covered by private plans, not just those covered by Medicare. The prices of drugs in other developed countries will be used as a reference point to ensure that negotiations result in a price that’s no more than 1.2 times the average price in six other places.

The proposal would also address pricing hikes that have been applied to different drugs covered by Medicare Part B and D, requiring companies to either undo any increases that surpass the rate of inflation or rebate the entirety of those hikes since 2016 to the Treasury. Additionally, the plan would cap out-of-pocket prescription drugs costs for those covered by the Medicare Part D to $2000 annually. Currently, there is no cap.

In the past, outlines of the proposal had included a role for the Government Accountability Office to serve as a go-between between the HHS secretary and companies if no price could be reached. That tenet spurred concern from progressives, who’ve long opposed the involvement of a third party in the process. The final bill does not include such a role.

Action on prescription drug pricing is picking up momentum

Pelosi’s plan is just the latest sign of growing momentum on this front: Prescription drug prices are increasingly a central focus for both Democrats and Republicans, largely because so many voters have raised it as a major priority.

According to a 2018 poll from Kaiser Family Foundation, 63 percent of voters think there is not enough regulation on drug prices, including 72 percent of Democrats and 53 percent of Republicans. What exactly Congress will pass, however, remains an open question.

Right now, there are a whole lot of options on the subject to choose from.

Plans from progressive House Democrats including Rep. Lloyd Doggett would go further than the Pelosi proposal and enable manufacturers to produce generic drugs to compete with existing ones, if pharmaceutical companies didn’t lower their prices. Others, like a bipartisan Senate bill from Sens. Chuck Grassley (R-IA) and Ron Wyden (D-OR) that’s advanced out of the Finance Committee, would go narrower, targeting a piece of the problem by capping out-of-pocket costs Medicare recipients pay for prescription drugs.

Several 2020 Democratic candidates including Sens. Bernie Sanders, Elizabeth Warren, and Kamala Harris have also proposed their own plans to take on the issue. They include efforts to adjust US drug prices based on the prices in other developed countries and strong penalties if companies are overcharging US consumers.

Voter pressure around the topic — and the ability to score a victory ahead of the 2020 election — are major factors pushing lawmakers to get something done.

Momentum for the bill depends on Trump, but the politics are complicated

Interestingly enough, this is an issue where Democrats and Trump have previously agreed — though the president’s position hasn’t always been the most reliable.

Although Trump has said he supports more government intervention when it comes to reducing drug prices, multiple proposals he’s pushed including a plan to reduce out-of-pocket drug costs for older individuals have hit roadblocks.

It also doesn’t help that this is a policy area where Trump’s positions have clashed with long-standing Republican ones. While Trump has been more open to federal pricing oversight, Republicans have long chafed against this due to ties to the pharmaceutical industry and the party’s commitment to so-called “light-touch” regulation.

Trump’s interest has provided Republicans some cover to back away from their historic position of protecting pharmaceutical business interests, said Brendan Buck, a partner at Blue Engine Media who had previously advised former House speaker Paul Ryan.

“The president has totally shuffled the politics on this issue in a way that’s pretty remarkable,” Buck previously told Vox. “The new willingness for Republicans to take on drug companies just didn’t exist five years ago.”

Trump, however, has yet to reveal whether he supports House Democrats’ proposal. And even if he does, it’s not certain that backing would be enough to win over Senate Republicans.

There’s also an ongoing question of whether Democrats would even want to work with Trump on a bipartisan option. Although the passage of effective prescription drug pricing legislation would be a helpful win for Democrats ahead of 2020, granting Trump this victory isn’t something lawmakers are particularly keen to do.

Experts tracking the issue think the most likely action on the subject will be a more narrow measure from the Senate that incrementally addresses the problem.

“With the current configuration of the Senate, you’re not going to get legislation through there that’s aggressive enough to make a lot of people happy in the Democratic side,” George Mason University health policy professor Len Nichols previously told Vox.

“This is 2019 and not 1819”: mounted police leading a black man by a rope sparks outrage
Coronavirus is making us all socially awkward
Trump: Saudi Arabia paid the US $1 billion for more troops. Pentagon: Eh, not quite.
How some 2020 Democrats would actually get their climate plans through the Senate
What will happen if a Trump n-word tape comes out? Look at the Access Hollywood tape.
Pressure is growing to allow members of Congress to vote remotely amid coronavirus concerns