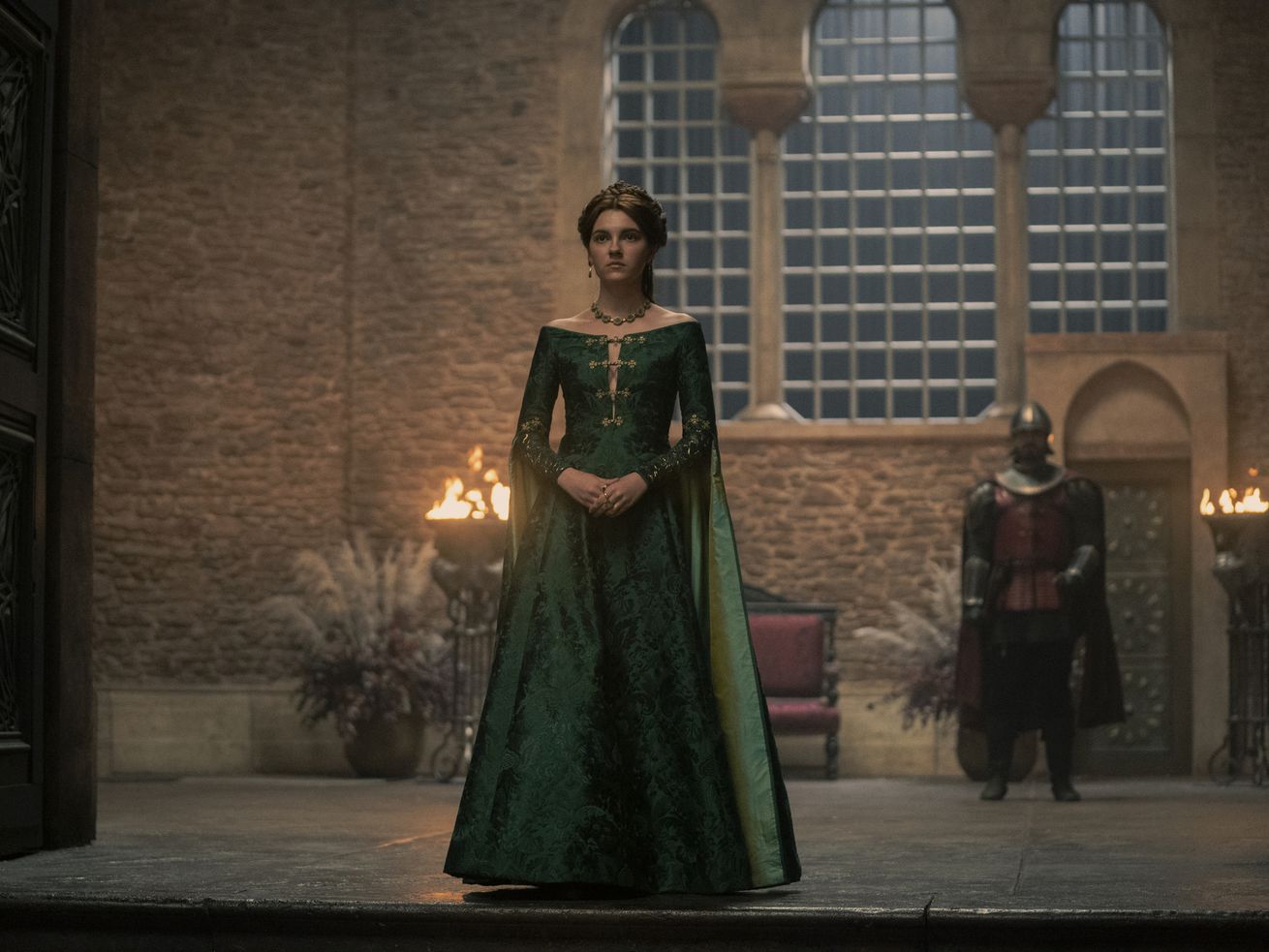 In episode 5, “We Light the Way,” all fashion clues point toward civil war.

Like most of the other episodes thus far, the name of the game is quiet but crucial political maneuvering. Not counting the two explosive and bloody deaths that bookend the ep, most of the plot deals with Rhaenyra’s marriage to her childhood buddy Laenor Velaryon. It’s a good match, except that they’re both in love with other people. By the time the credits roll, both of those romances are destroyed, and we’re reminded that this is Westeros, where love and loyalty usually die quick deaths.

But the most Thrones-ian chess move of all has nothing to do with that show’s violence and everything to do with its symbolic political shenanigans. Until now, House of the Dragon’s final key player, Alicent (Emily Carey), has yet to accept her role and start playing the board. Last episode, we saw Rhaenyra (Milly Alcock) begin to make her first offensive moves; in this episode, Alicent not only finally makes her own power play but one-ups Rhaenyra in a major way with lasting consequences: She wears a green dress to her stepdaughter’s wedding.

If you’re a Thrones nerd, this is a total “oh, shit!” moment. Please allow us to explain.

Early in this episode, we finally see a glimmer of humanity from the newly sacked Otto Hightower (Rhys Ifans). As he’s leaving his daughter behind in King’s Landing, alone and friendless, he urges Alicent to wake up and prepare to fight for the claim of her firstborn son, Aegon, to the throne. Until now, Otto’s given us nothing but cold ambition, but here we see a glimmer of real concern and heartache for Alicent.

If she tries to support Rhaenyra, he warns her, she’ll go down with her — and Rhaenyra will go down. With this ominous sermon and zero tips for how to deal with being totally fucked, he makes his exit.

Otto’s conviction that no one will accept Rhaenyra as heir draws on centuries of Targaryen tradition in which only a male heir could ascend the throne. And while the lords of the realm ostensibly swore the knee to Rhaenyra, we’ve seen that the populist view favors Aegon, solely because he was born male and given a kingly name. Rhaenyra has largely rejected this argument, vowing to simply change the status quo once she is ruler.

Alicent, however, now seems to grasp for the first time how futile a pipe dream that is, as well as how precarious her situation is. It doesn’t help that she’s learned Rhaenyra was lying to her about still being virginal, which seems to destroy all her personal loyalty and love for her best friend-turned-stepdaughter. In her jealousy, bitterness, and newfound sense of self-preservation, Alicent makes a huge decision: She decides to take her father’s advice and begin stealthily advancing Aegon’s claim to the throne over that of Rhaenyra. To do this, she turns to that age-old method: color symbolism.

The vibrant emerald gown Alicent wears to the wedding feast — showing up late so she really makes an impression — signals to astute members of the King’s Court that she’s ready and willing to fight for the throne on behalf of Aegon. Green is the color of House Hightower and a reference to the color of the beacon atop the tall tower of her family’s seat in the ancient southern port city of Oldtown.

The Hightowers are named after this structure, which functions as both a secure seaside fortress and a lighthouse. The tower gives the family its crest and its motto: “We light the way,” a.k.a. the episode title. And, crucially, when House Hightower needs to call its soldiers and bannermen to arms in its name, it summons them by changing the flame atop the Hightower to green.

The message, to those who see it, is clear: Alicent is summoning her supporters to war.

Since Rhaenyra’s wedding and marriage into the high-powered Velaryon house is meant to be a reinforcement of her claim to heir, Alicent’s fashion statement couldn’t be more of an uppercut to the king’s agenda. Focused as they are on the wedding feast, King Viserys and Rhaenyra don’t seem to realize the message the queen is sending. But many in the crowd do, and before the evening is out, some of them have explicitly offered their support to Alicent. She even goes one step further, recruiting Rhaenyra’s sworn protector, Ser Criston Cole (Fabien Frankel), into her service at his most vulnerable moment, knowing she’s just secured a powerful ally.

What we’ve just witnessed is the birth of the kingdom’s primary opposing political forces in the civil war to follow: the Greens and the Blacks. The Greens are Alicent’s and ultimately Aegon’s supporters. The Blacks refer to Rhaenyra’s supporters, as black and red are the traditional colors of House Targaryen. This treasonous faction may seem small now, but we already know support for Aegon is rampant throughout the realm.

The Greens and the Blacks aren’t just about which of the king’s children is the more popular ruler — remember, Aegon is a toddler, so no one knows what kind of king he’ll be. Support for him is based purely on the widespread populist belief that women shouldn’t be able to inherit the crown. By taking up his claim to the throne, Alicent has to align herself with a deeply misogynistic strain of thinking. In contrast, aligning with Rhaeynra and supporting her claim to the throne is inherently a sign of support for women’s equality. In other words, on a rudimentary level, the Greens and the Blacks are the Westeros version of red states and blue states, with their political overtones likely having far more impact on who joins them and what they want than any direct support for the two women at the center of their movements.

As for their actual historical analogue, some fans have argued that the Dance of Dragons seems to be based on a lesser-known period of British history called “The Anarchy,” in which King Henry I named as his heir the powerful warrior Empress Matilda, usually called “Maud.” Maud was a direct descendent of William the Conqueror and the king’s only direct heir. Because she was a woman, however, the court rejected her claim, and her cousin Stephen essentially beat her to the throne and refused to give it up.

This clash plunged England into a 19-year civil war. (Fun fact: The current official website of the British royalty insists that “anarchy never spread over the whole country.” Nice try, royals, but it’s called “The Anarchy,” we know what’s up!) The war finally resolved itself, sort of, when Stephen adopted Maud’s son Henry and agreed to pass the throne to him after Stephen’s own death. Henry II became one of England’s more famous rulers, and Maud wound up dying peacefully of old age.

Alas, if you know anything about the Targaryens and Westeros, you know things aren’t likely to be resolved so harmoniously for any of our key players. So what Alicent’s green dress really signals is a sign to the audience to buckle up: It’s going to be a bumpy, bloody ride.