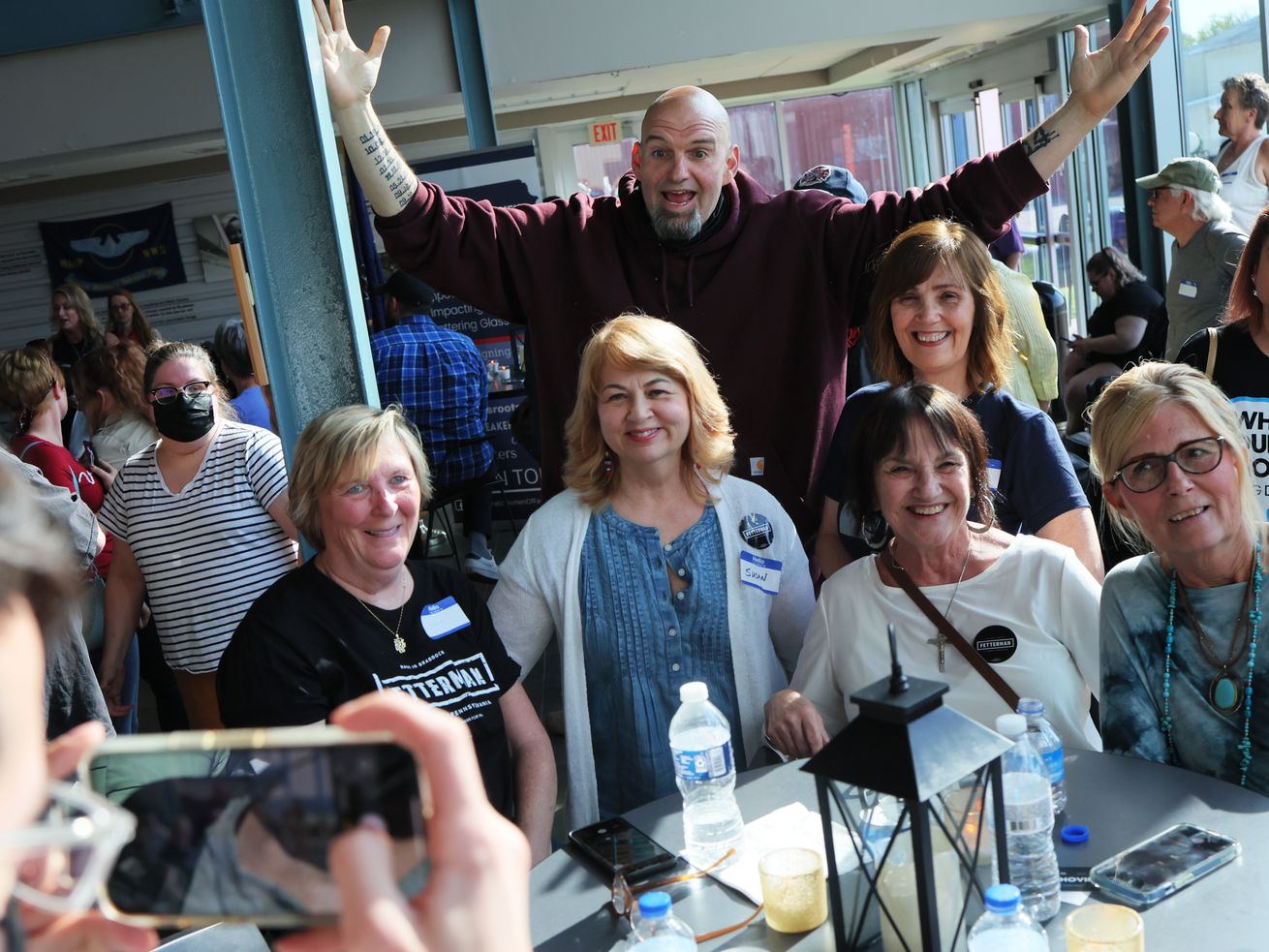 How the Pennsylvania Senate primary became a fight for the future of the Democratic Party.

Who will win Pennsylvania’s Democratic Senate primary on Tuesday, May 17, isn’t much of a mystery. John Fetterman, the state’s lieutenant governor, has been leading in polls for months in one of Democrats’ most important races for keeping control of the Senate.

Recent polls show him ahead of his closest challenger, Rep. Conor Lamb — the sort of moderate Democrats typically put forward in Pennsylvania Senate races — by 30 points.

His dominance may seem surprising. But behind it is his success in addressing two pressing problems Democrats have struggled with nationally. That their primary voters tend to favor progressive policies more than general election voters, and their party seems unable to clearly define what it believes and who it’s for: It wants to advance progressive ideas without being branded as leftist, and to strike a balance between elite priorities and blue-collar concerns.

The quirks of his candidacy mean that Fetterman is able to find a balance between extremes. A longtime politician, he’s promoted progressive causes in the state while also bending to practical, populist concerns. And he’s done much of that while wearing Carhartt hoodies and basketball shorts.

Who is John Fetterman?

Fetterman’s parents were conservative Republicans, who went from being “extremely poor” to affluent because of his dad’s small business. He became interested in public service after a close friend’s death reordered his life and career goals. He worked in mentoring organizations before getting a masters degree at Harvard’s Kennedy School and eventually led a GED program in Braddock, a working-class, majority-Black industrial town east of Pittsburgh.

In 2005, he won his first race for Braddock’s mayor by one vote, and led the town for a decade before running his first statewide race in the 2016 Democratic Senate primary to challenge Republican Sen. Pat Toomey (whose seat he is now trying to flip). Though he lost that contest, he was successful in running for lieutenant governor in 2018.

Sen. Bernie Sanders (whom he supported in 2016) endorsed him in that race, solidifying Fetterman’s progressive credentials. A mostly powerless office, it’s nevertheless given him broad name recognition, and he’s used the post to advocate for marijuana legalization, gay and trans rights (he was in the news for hanging a pride flag from his office in Harrisburg), and prison reform.

That last area was one where he could actually make a difference as the head of the board of pardons. Under his leadership, the board waived the application fee for those seeking clemency, encouraged more people to apply, and significantly increased the number of recommendations for pardons and commutations.

Solidly a progressive, though hesitant to use the “progressive” label, Fetterman occupies an unusual position in the Democratic contest.

He’s not as left-leaning as his closest ideological rival, Malcolm Kenyatta, the Black, gay state representative from North Philadelphia, or an avowed centrist, like Lamb, the DC-born, retired Marine. But the blue-collar progressivism Fetterman represents strings together different elements: old-school centrist concerns for working-class people — often focused on the white working class — and the activist-minded priorities of a younger, more diverse electorate.

At first glance, Lamb, who won a Republican-leaning seat in a 2018 special election by just a thousand votes and managed to hold the seat in 2020, would seem like the ideal candidate to win statewide. Frequently described as being “straight from central casting,” he is more of a moderate than either Fetterman or Kenyatta, and on the campaign trail has been willing to criticize big spending proposals that might worsen inflation. His support from moderates and centrists hasn’t been enough to rival Fetterman yet in the primary, even though these voters will be crucial to winning statewide.

Lamb “doesn’t scare Republicans. He’s not over the top, he’s not controversial, he’s a Marine. In a general, he’s the guy,” Mustafa Rashed, a Philadelphia-based strategist, told me. “But it’s hard to get through primaries being anywhere near the middle anymore.”

Fetterman’s rise and Lamb’s decline show a tension in the state’s Democratic electorate that is also being replicated around the country. The party has moved left, and has pulled candidates away from the old political center.

At the same time, Democrats need to improve their support among working-class, non-college educated voters of all races who might be turned off from too radical a message. Just 23 percent of Pennsylvania Democratic primary voters describe themselves as very liberal; 44 percent call themselves moderates. And they are nearly evenly split between wanting moderates or progressives to be in control in Washington, according to recent Monmouth University polling. These internal struggles are happening while more Democrats in the state are flipping their party affiliation to the Republican Party, and as Republicans close the voter registration gap that had given Democrats an advantage in past elections.

A pro-Lamb super PAC seemed to stress this point when it aired an ad calling the lieutenant governor a “self-described democratic socialist” (though Fetterman doesn’t call himself that). And that attack, along with questions from Kenyatta about a moment in 2013 when the then-mayor confronted a Black jogger with a shotgun after thinking he heard gunshots, get at a central question of Fetterman’s candidacy: whether he’s progressive enough to win a Democratic primary but too progressive and unconventional to win a general election.

Fetterman’s campaign argues that he’s been successful in part because of his ability to transcend this ideological dichotomy.

“John’s going to some of the reddest counties. He’s talking to the people in the reddest counties and the bluest counties. He’s going everywhere,” Joe Calvello, the campaign’s communications director told me. “John is a different type of Democrat, who can appeal to people in these forgotten towns — places that used to vote Democrat, but that Democrats don’t even visit anymore. He can appeal to these people, because he shows up, and he listens.”

The polls suggest that primary voters also believe Fetterman won’t have a problem with a more moderate general electorate, since he’s drawing more support from them than either of his rivals. He has deep roots in the state, feels like an outsider even though he’s been in political office for 16 years, may benefit from his outspoken advocacy for abortion rights, and is an example of a populist progressive: someone who has stuck to his beliefs for years, even if some of them, like support for fracking and suspending the gas tax, prioritize the economy over larger left-leaning climate goals.

This Pennsylvania contest is ramping up as Democrats struggle with an identity crisis nationally. They just barely control Washington, and have fumbled their signature legislative plan. They don’t know if they should push for climate-change mitigation, whether to expand the social safety net for families, or how to talk about inflation. Americans are frustrated, and they mostly blame one party: the one in power.

That presents a major challenge for Democrats, including in Pennsylvania, where polling over the last few months shows the economy as voters’ first concern. A growing plurality of voters say they are worse off than they were a year ago, and only a quarter think the country is on the right track. Looking at Democratic voters specifically, the general trend remains the same: Democrats are mixed on whether the country is heading in the right direction. In Washington, Democrats aren’t unified on how to best address this issue — and it’s possible, if not likely, that no legislation addressing economic concerns will be passed before November.

Fetterman doesn’t have any federal legislative power. But he has shown a messaging discipline that suggests to voters that he hears their concerns and has a plan to follow in Congress if Democrats hold their majority. He’s talked often about creating more jobs, raising the minimum wage, and abolishing the filibuster to do that if needed.

Voters also seem to trust Fetterman on other issues that polling suggests are of interest to Democrats, like the Russia-Ukraine war, health care costs, and voting rights. And after a draft Supreme Court decision overturning Roe v. Wade leaked, he’s brought abortion rights to the front of his campaign, too. Pennsylvania allows abortion up to the 24th week of pregnancy by law, and a Republican-run state government could pass tighter restrictions, or a ban, even as Pennsylvanians grow more supportive of abortion.

His authenticity also shows in his pragmatism, something mainstream progressive and national Democrats tend to put second to ideological purity. He’s not in line with many on the left flank of his party on climate issues, for example, where he defends fracking as a source for jobs and revitalization of industrial communities.

Based on his campaigning, Fetterman seems to have been successful so far due to understanding Pennsylvania’s landscape; he’s staked out a path between the political left and the center, and has developed a strong personal brand as a pragmatic outsider. His primary election win will test whether this brand of populist progressivism is enough to hold the Biden-Obama coalition of moderate suburban and progressive urban voters together, while cutting into moderate and conservative support for the eventual Republican nominee in November.

2 losers and 1 winner from the Georgia, Alabama, and Arkansas primaries

What we know about the Uvalde elementary school shooting