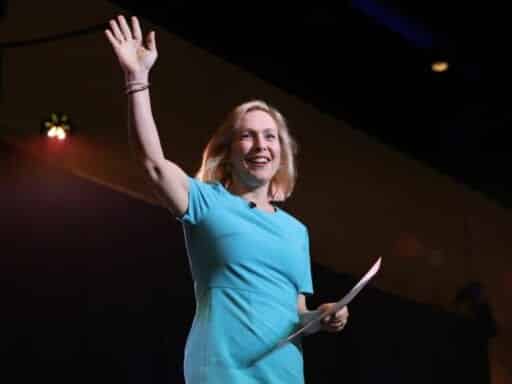 The New York senator is making gender equity the centerpiece of her presidential campaign.

Kirsten Gillibrand dropped out of the 2020 presidential race on August 28. Here’s the rest of the Democratic field.

Kirsten Gillibrand, a New York senator known for her #MeToo advocacy, is making gender equity the centerpiece of her presidential campaign. A two-term senator who has also served in the House, Gillibrand has made a name for herself by pushing for reforms in the US military and calling for accountability in Congress when it comes to sexual misconduct.

As part of her 2020 run, Gillibrand is emphasizing that the future of the Democratic Party is inextricably tied to the power of women. It’s a message that’s resonated with some — she’s attracted a strong contingent of women donors — but she’s also had a tough time breaking out of a crowded pack.

Gillibrand’s focus on gender inequities, as well as family policy, stems from a long track record on the subject, and her own experience as one of a handful women in the Senate with young children. Her efforts on these issues have been wide-ranging, though it’s unclear whether they’ll be enough to set her apart. They do, however, speak to a commitment that’s lasted since long before the #MeToo movement took off.

In 2013, Gillibrand spearheaded a charge to change how sexual assault cases are handled in the military, contributing to a national conversation and winning over some Republicans in Congress. And in 2017, she called on Sen. Al Franken to resign over allegations that he groped multiple women, a decision that pitted her against establishment Democrats and many Democratic voters who were reluctant to see the popular Minnesota senator go. Gillibrand did not reverse her position on Franken despite this opposition; he ultimately resigned and was replaced by Tina Smith.

This record is something Gillibrand highlights on the trail. “I do know that I’m a voice for all women in this country, and that my leadership on these issues matter,” she said during a May roundtable in Iowa.

Gillibrand has unveiled a number of proposals that target inequality and create new protections for women. She is running on a proposal to provide Americans with paid family leave. And her proposal on abortion rights, which calls for the establishment of a new funding stream that would bolster the presence of reproductive health centers in all 50 states, is among the most specific on the subject put forth by a 2020 candidate.

Other key policies Gillibrand is known for include a measure that helped guarantee ongoing health care coverage for 9/11 first responders, many of whom are dealing with serious medical fallout years later, as well as her work repealing the military’s “Don’t Ask, Don’t Tell” policy.

One of the areas Gillibrand has been hammered on is that she’s evolved politically. She was once a moderate Democrat in the House who took positions that would likely be unpopular with the current progressive base. In the last 10 years in the Senate, she’s taken far more liberal positions consistently, become known for her staunch opposition to Trump, and appears ready to run as a progressive.

Flanked by a number of progressive competitors, however, Gillibrand has faltered when it comes to decisively carving out her niche.

Gillibrand stepped into the spotlight in recent years as a prominent voice on the issue of sexual misconduct. She spoke out against Franken, and she’s one of very few Democratic politicians to have said Bill Clinton should have resigned as president.

Her comments have raised a fair share of ire from a portion of the Democratic base and from some big donors, including billionaire George Soros, some of whom blamed her rather than Franken for the Minnesota senator’s exit from public life.

Many of Gillibrand’s critics — including Soros — have argued that her stances on the subject of sexual misconduct have been opportunistic and an effort to set herself apart as the 2020 election approaches. Philippe Reines, a former adviser to Hillary Clinton, has been among those who’ve wondered why Gillibrand chose to take a stand on both Clinton and Franken, arguing in 2017 that she hasn’t fully explained her “rationale” for doing so.

Like all politicians, Gillibrand no doubt weighs how her decisions factor into her political ambitions. But she’s not new to the issues of sexual assault or harassment. Those implying that she’s only jumping in now obscure that fact.

Gillibrand has been pushing reforms on the subject since 2013, after she first saw a documentary highlighting the military’s obliviousness to its problem with sexual assault. For more than five years, she’s gone up against the Pentagon in an effort to establish an independent process for prosecuting sexual assault within the military.

As the hierarchical system currently stands, military commanders are the only ones with the power to advance prosecution of sexual assault cases, a process which has heavily disadvantaged victims in the past and has ignored the retaliation they’ve faced for speaking out. Measures Gillibrand has pushed to address the issue have thus far been stymied and opposed by leaders in the military, who argue that such changes would up-end the way the body operates.

Gillibrand, as part of her efforts on this issue, also compiles an annual report about sexual assault in the military to highlight abuses and has sought to strengthen protections for sexual assault victims on college campuses as well.

Gender equality has consistently been at the forefront of her policy proposals, including her bill aimed at making paid family leave federal law.

Additionally, she’s known for using her fundraising prowess to promote other women candidates. Off the Sidelines — a group she started back in 2012 — has since raised roughly $7 million for women candidates across the country, according to the organization.

Gillibrand is now a progressive, though she’ll likely face questions about how she’s moved left since joining the Senate

Gillibrand is no stranger to the comparison between her and former Democratic nominee Hillary Clinton, whose Senate seat she now holds. Much like Clinton, she’s a former attorney, and she’s worked for corporate interests in the past, serving as a lawyer on behalf of Philip Morris during the early years of her career. She’s also been accused of having close ties to Wall Street, one of her key constituents as a New York senator, though she’s repeatedly backed certain policies that would rein in the banks.

Unlike Clinton, Gillibrand has significantly less baggage to contend with, though she will have to explain a shift to the left she’s made since taking her Senate seat almost a decade ago.

Gillibrand will likely be pressed on this evolution during her campaign. While she’s now one of the most progressive members in the upper chamber — backing the abolishment of ICE, turning down corporate PAC money, and advocating stringent gun control laws — she was once a relatively centrist Blue Dog Democrat in the House who was awarded an “A” rating from the National Rifle Association. Similarly, she once backed a more conservative immigration policy, which rejected amnesty for any undocumented immigrants.

Since joining the Senate, she’s become significantly more progressive and now says she’s “embarrassed” about her past positions on both immigration and guns. Gillibrand previously represented an upstate New York district with more conservative leanings. She’s said that meeting with constituents across her state and people who have been affected by gun violence and immigration policies have helped reshape her stances on these issues.

“Politicians who never change their mind, who never thought they were wrong, who never wished they did it differently, I would question that as well,” Gillibrand told Newsday in a story on her changing positions. “Because you learn and you grow and you become a stronger, better person and you recognize where you didn’t have it right and you recognize where you did and you move forward.”

During her time in the upper chamber, she’s also proven to be an effective champion for her New York constituents, with one of her landmark policy wins centered on guaranteeing health care coverage for first responders and law enforcement officers who are still recovering from the debilitating effects of their work conducting cleanup after the 9/11 terrorist attack.

What are Kirsten Gillibrand’s policies?

Her plans would strengthen protections for abortion rights, expand access to child care and guarantee every worker paid family leave. She’s been a leader in addressing reproductive rights and this focus has provided an opening for her campaign as the spotlight has grown on abortion in recent months.

A pledge that Gillibrand made earlier this year — to only nominate judges who commit to backing Roe v. Wade — has set the standard for nearly every other 2020 Democrat, most of whom have followed suit. Her abortion rights plan, one of the most comprehensive that’s been unveiled by any candidate, pushes for the codification of Roe into law.

Family policy has long been another core piece of Gillibrand’s work — she’s now introduced a bill to establish paid family leave several times in the Senate — and it’s also central to her 2020 campaign. A platform Gillibrand unveiled in May offers a wide-ranging vision on how to make parenting more affordable, including a measure that would defray the costs of fertility treatments.

Additionally, one of Gillibrand’s earliest policy proposals focused on campaign finance and sought to replicate a radical idea that’s been implemented in Seattle on a national scale. As part of the plan, the federal government would give every American voter up to $600 each election cycle in vouchers, which they could use to donate to the candidate of their choice. As the thinking behind it goes, if voters are able to flood elections with small donations, they could reduce the influence of large, often corporate ones.

Gillibrand’s policy proposals and track record highlight a focused vision on gender equity and combating sexual misconduct. Whether this message translates more broadly to Democratic voters this primary cycle, however, is an open question.

How the US hopes to avoid bottlenecks in much-needed vaccine supplies
How people in the UK, Germany, and France feel about Joe Biden
The confusing ballot procedure behind Alexandria Ocasio-Cortez and Joe Crowley’s Twitter beef, expla...
Why early polls for Super Tuesday missed Biden’s sweep
Beef is bad for the planet. Can we make it better?
EU leaders agree to deeper cuts to greenhouse gas emissions by 2030