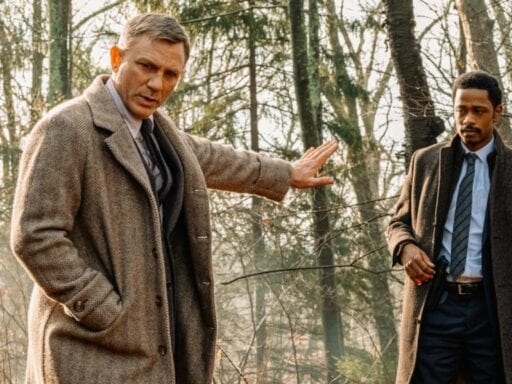 Whodunnits in the vein of Agatha Christie — like Knives Out, a romping delight from genre-bending Last Jedi auteur Rian Johnson — require a degree of prejudice in the reader in order to work properly. Characters are slotted into a type, usually owing to their occupation, nationality, or social standing, and then the fun of the story comes from how people act against (or within) type, subverting our guesses.

Christie, of course, was working in England a century ago; Johnson’s story is set in contemporary, richly autumnal patrician Massachusetts, in the home of a hugely successful mystery writer who has, unfortunately, turned up dead. And because this is America in 2019, the prejudices and privileges displayed by the family vying for his money are uniquely American, too.

But Knives Out, being a whodunnit, is best if you go in knowing as little as possible. The twists aren’t aids to telling the story, they are the story. It’s the most finely tuned version of a murder mystery you could hope for, with joyous performances and style in spades. So if you don’t want a hint of a spoiler, stop here. If you don’t mind a bit of background, carry on.

Knives Out is mostly just fun, but it lodges some barbs, too

Harlan Thrombey (Christopher Plummer) built his fortune on the mystery novels he wrote, so he’s clearly a man of great imagination, but his family is not quite as bright. There’s business-minded daughter Linda (Jamie Lee Curtis), her husband Richard (Don Johnson), and their mean, terrible son Ransom (Chris Evans). There’s Harlan’s son Walt (Michael Shannon), who runs the family publishing company, and Joni (Toni Colette), the widowed daughter-in-law, who enthusiastically shows how compassionate she is toward people the rest of the family sniffs at, but also is happy to take the family’s money. Two more grandkids — priggish alt-right shitposter Jacob (Jaeden Martell) and self-righteous Meg (Katherine Langford) round out the pack. Everybody, to a one, sucks.

Harlan died under mysterious circumstances, which only his longtime nurse Marta (Ana de Armas) knows anything about, and a trio of men arrive to investigate: two police detectives (Lakeith Stanfield and Noah Segan) and one private detective (Daniel Craig, sporting, as one character puts it, a Foghorn Leghorn accent). They try to dig into the story but it keeps slipping out of their grasp.

As it does for the audience, too. If Knives Out moved even 3 percent more slowly than it does, there’s a good chance it would be easier to anticipate what’s going to happen next — a few times I felt like I was on the verge of discovery, but as fast as you can start to fit the pieces together, a new gap appears. It’s confident and exciting, with performances that suggest a cast having the time of their lives on set. (It’s always nice to see Daniel Craig spring into antic electricity outside the confines of his brooding James Bond; as for Chris Evans, his post-Captain America life seems to suit him nicely.)

Knives Out is primarily splendid revelry rather than satire; it’s not particularly sophisticated social critique to suggest that sometimes the scions of the very wealthy are also ungrateful wretches with delusions of grandeur. (That’s been going on in literature for a very long time.)

But that doesn’t keep the movie from lodging a few barbs between the ribs for rueful laughs, as much at the performatively woke as the hatefully racist. The whole family proclaims their love for Marta but nobody manages to remember which South American country she’s from, and when things start to get serious they’re more than willing to turn on her. The Thrombley crew includes people who can pivot from complaining about immigrants to quoting Hamilton on a dime — a version of the sort of clueless liberalism that Bradley Whitford’s “I would have voted for Obama a third time” Get Out line immortalized. It also includes a kid someone describes as a “literal Nazi.”

In this way, Knives Out bears some striking similarities to Ready or Not, which came out only weeks before Knives Out’s Toronto premiere. That one’s a horror film, but it concerns a young woman, an outsider, who’s drawn into a greedy family’s sprawling estate, only to discover that those who perform kindness can turn on her in an instant.

But while Ready or Not posits wealth and privilege as a violent horror show, Knives Out paints it as farce. The Thrombley family’s own mythos about itself and its “ancestral home” is silly; its members are worthy of ridicule, not because they’re wealthy, but because they refuse to admit their wealth comes from anything but their own merit. Their parroting of talking points that only benefit them, their belief in their own superiority, their self-delusional arrogance — that’s what’s ridiculous. They’ve willingly slotted themselves into caricatures that are all too familiar today, and the movie plays on those gleefully.

So, couching their story in a rambling, romping murder mystery turns them into entertainment for us rather than us into cogs in the wheel for them. In this case, it’s their blind prejudices, not ours, that lead them astray.

And it’s all done with such a light touch that you can’t help thinking Knives Out is really an adaptation of one of Harlan’s mysteries, which, it turns out, it sort of is. It’s a worthy tribute to Agatha Christie, a light but pointed rebuke, and a delectable time at the movies, too.

Knives Out premiered at the Toronto International Film Festival in September. It opens in theaters on November 27.

Why Christians keep appropriating Jewish ritual symbols
America’s looming housing catastrophe, explained
What Kamala Harris means to women who are childfree by choice
The Rehab Racket: Investigating the high cost of addiction care
As coronavirus cases increase worldwide, an Australian state is imposing tough new restrictions
Why do all these robots have cartoon eyes?