People have donated millions to fight the Amazon fires. Will the money help? 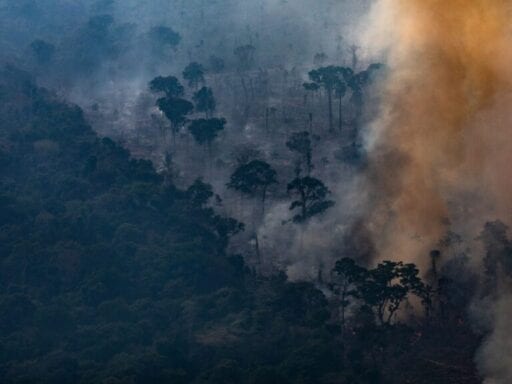 Share
Loading...
An aerial image of a fire burning in the Brazilian Amazon rainforest on August 25, 2019. | Victor Moriyama/Getty Images

We want to believe that our money can stop climate change, but the reality is more complicated.

Just this year, we’ve witnessed this cycle play out with the Notre Dame Cathedral fire, the political crisis in Sudan, and most recently, the weeks-long blazes that are ravaging the Amazon rainforest. The forest has been hit with a record number of fires this year: More than 74,000 fires have been reported, an 84 percent increase over the number at the same time last year.

Well-meaning Americans have eagerly opened their wallets to nonprofit organizations and charities. On Facebook, the top six trending fundraisers are currently related to the Amazon fires and tied to advocacy groups like Amazon Watch, Rainforest Alliance, and Rainforest Foundation Norway.

“When people are faced with a tragedy they can’t personally impact, they find ways to feel like they’re doing something,” says associate professor David Karpf, a researcher on digital political advocacy at George Washington University.

That’s been the case for decades, he adds. Before the internet, people would mention a disaster to their neighbor, or donate to a local charity and wear its t-shirt to show support for a cause.

“There’s not a thing that a person in Ohio can do to directly contribute to the fires in the Amazon,” Karpf says. “But when you see a story like that, you’re moved to action.”

Donors generally trust that the organizations they’re giving to will use their money to ethically further the cause, says Stanford University professor Rob Reich, who has written several books on philanthropy and civil society. Still, there’s a broad assumption perpetuated by social media hashtags like #SaveTheAmazon and #ActForTheAmazon that donations will relieve climate change or curb the fires’ impact.

According to advocacy groups, donated funds are typically used for longer-term projects and support for indigenous communities, like research or government lobbying.

For example, Leonardo DiCaprio’s environmental group, Earth Alliance, said it will distribute funds among a number of local partners that work directly with the indigenous people who live in the Amazon.

Amazon Watch, an advocacy nonprofit that has collected money through Facebook Fundraiser, says that most of its funds will be directed toward research and backing indigenous communities’ advocacy efforts in Brazil. While the Amazon fires are an imminent threat, the group is working to change the “destructive environmental policies” put in place by Brazilian President Jair Bolsonaro, according to campaign director Moira Birss. The outpouring of global support during this crisis is much needed, Birss says, but she hopes that concern for the Amazon’s lands doesn’t end after the fires die down.

The nature of these actions, even in the pre-internet era, has always been performative and self-assuring, Karpf explains. Posting about one’s support for a cause or charity requires almost no commitment and as little effort as a signature for a petition or a few donated dollars. The difference with Instagram and Twitter is that public posts and retweets are now visible for anyone to see.

Public spectacle, for the most part, leads to further discussion and even conflict: The best actionable ways to help “save the Amazon” are currently being disputed online among regular people, activists, and celebrities alike. Celebrities — the likes of DiCaprio, Mark Ruffalo, Madonna, and Kris Jenner — are airing their concerns on social media, some encouraging their fan base to donate as much as they can to verified organizations.

Fires are raging across the Amazon. We need to act today. Let’s put our power into action and support indigenous efforts to stop the fires and protect the Amazon #Act4Amazonia ➡️ https://t.co/prBhb3McV4

In this era of rampant misinformation, a celebrity endorsement offers an aspect of trust that people rely on when it comes to donating, Reich says.

But as purveyors of information, celebrities aren’t immune to the critics in their comments sections or Twitter replies. Users called them out (and call out each other) for not mentioning the root causes of the fires, such as the Brazilian government’s pro-business agenda, which has spurred large-scale deforestation by loggers and cattle farmers. While donations are helpful, some activists are adamantly encouraging people to eat less meat, which theoretically would slow down Brazil’s major beef-packing industry.

Others argue that the problem is bigger than meat: They say the fires are the cumulative fault of big agribusiness and compliant international governments, whose policies encourage displacement of indigenous people.

I’m tired of these “EAT LESS MEAT” posts in response to the agri-business-linked arsons of the Amazon.

The palm oil in your favorite vegan burger is possible because entire forests in Papua New Guinea were “cleared” and burned for the benefit of landowners.

These impassioned arguments reveal how there’s little public consensus on the best collective course of action. Still, some people are moved to donate money — to purchase the peace of mind that their dollars, when pooled together, would be a large enough sum to enact some type of change.

“I donated because I hope people running this go fund me [sic] can do what I cannot do alone,” one person commented on their $15 donation to Conservation International.

“Let’s do our part to fight the fires!” another wrote with a $25 contribution.

Viral news allows organizations to rapidly pool together donations, Reich says. But there’s a downside: The news cycle’s hyperactive pace does little to hold them accountable for the money they’ve collected. Months or even years later, people tend to forget or move on from the $10 or $50 they’d contributed.

As Gaby De Valle wrote previously for Vox, crowdfunding is a stopgap solution to systemic issues. It offers a short-term monetary fix to a problem that is typically caused by much bigger forces, from climate change to emergency health care bills.

“The first step is retweeting,” says Karpf. “The next is donating to a cause. But then again, we’re a bit too late on the issue of climate change.” (Environmental advocacy efforts compose around 3 percent of Americans’ charitable spending habits, according to Giving USA’s 2018 report on philanthropy in the US.)

In this case, the sweeping Amazon fires were aggravated by record temperatures, drought, and deforestation — risk factors made worse by human activity. No amount of money can literally stop the fires (although Bolsanaro has deployed military aircraft and troops to fight them), but it can help fund advocacy efforts and employ political lobbyists in Brazil and its allying nations.

Brazil had dramatically curbed deforestation in 2014 through conservation measures, international aid, and changes in its soy and beef industry. Bolsonaro’s administration cut back on these environmental efforts, and the Brazilian president is flip-flopping over whether to accept a $22.2 million aid package from the Group of Seven nations.

“It’s impossible to ignore politics and think that you can donate money to address climate change or save the Amazon,” Reich says.

With nearly every viral event, there are often opportunistic bad actors who are keen to capitalize on the social media-driven fervor. A number of Instagram accounts in June, for example, falsely claimed that meals would be sent to Sudan for every repost or follow they received, thereby amassing tens of thousands of followers.

Crowdfunding sites have cracked down on malicious or false campaigns, but people still fall for them. Donors are generally not inclined to do research on the effectiveness of the charity they’re giving to, says Reich. They’re also more likely to donate if they have a personal connection to a cause or if someone they know asks them to contribute.

The psychology behind personal charity is complicated, Reich adds. Some people see posting about the fires as a virtue — that they’re actively advocating for a cause on their social media. Charity feels meaningful, or at the very least, it holds the promise of an effectively noncommittal solution Americans can partake in from thousands of miles away.

In 24 hours, Trump went from almost conceding to falsely claiming “I WON THE ELECTION!”
“Human challenge trials,” where healthy volunteers would be exposed to Covid-19, explained
Oh great, now we’re running out of bikes
Trump’s new favorite poll inflates his approval rating by about 10 points
Trump wants to change how poverty is calculated — to make fewer people eligible for benefits
Giuliani: Mueller can interview Trump if he can prove the president committed a crime