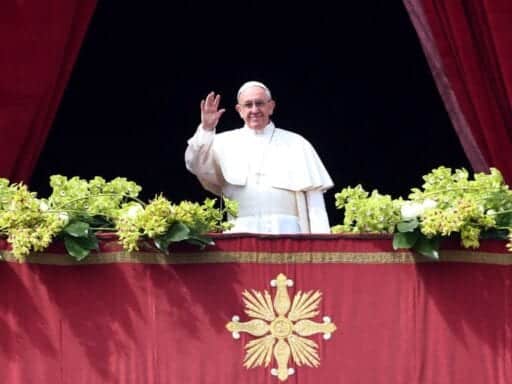 Days after the United States Conference of Catholic Bishops condemned the Trump administration’s policy of separating migrant families at the border, Pope Francis has weighed in with his own condemnation of the White House’s policy. In an interview with Reuters published Wednesday, the pope expressed his support for the bishops’ condemnation, saying, “I am on the side of the bishops’ conference,” and that “It’s not easy, but populism is not the solution.”

Francis has been a frequent and outspoken defender of refugees, both in the US and worldwide. Last year, the Vatican published a policy document outlining 20 “action points” the church would implement through its charities and governmental advocacy. Catholic charities in both America and Europe have been vital points of contact in the refugee crisis.

Speaking more specifically in the interview about European refugees, and referencing a case earlier this month when Italy turned away a migrant ship with 630 passengers, the pontiff said, “I believe that you cannot reject people who arrive. You have to receive them, help them, look after them, accompany them and then see where to put them, but throughout all of Europe.”

Pope Francis’s interview with Reuters touched on a variety of other hot-button political issues, including President Trump’s decision to withdraw from the Paris climate accord, shortly after meeting with Francis at the Vatican. Francis has long made environmentalism a touchstone issue of his papacy.

Francis’s words are part of a wider trend on the part of Christian faith leaders worldwide, who have overwhelmingly come out to disprove the idea — set forth by Attorney General Jeff Sessions last week and later defended by White House press secretary Sarah Sanders — that a Bible verse, Romans 13, legitimizes the Trump administration’s immigration policies.

Since then, Sessions’s own United Methodist Church — a mainline Protestant denomination — has taken the all-but-unprecedented step of formally charging Sessions with child abuse, racial discrimination, and dissemination of heretical doctrine in his use of Romans 13. Sessions now faces an ecclesiastical trial and, potentially, expulsion from his church.

Other traditional Trump allies, including the delegates of the Southern Baptist Convention and Franklin Graham, the son of the late Billy Graham, have also spoken out.