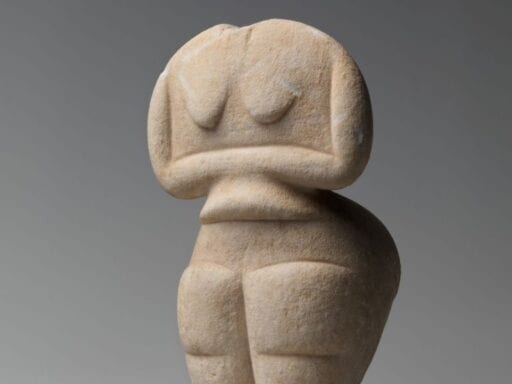 Going on Museum Hack’s Badass Bitches tour — a Guerrilla Girls-inspired feminist spree offered at multiple museums across the country — feels a little like having brunch with your smart, interesting, funny friend who’s always on the verge of being just a little bit too much. All her stories about dead women artists are fantastic, but by the third time she makes you do a cheer about dismantling the patriarchy or introduces a party game with the word “bitch” shoehorned into the title, you’re a little bit exhausted.

But still those are some damn good stories.

Museum Hack is a tour group that promises “unconventional tours of the world’s best museums” and begins its expeditions by brightly reminding the group that “museums are fucking awesome.” It’s not affiliated with any specific museum but offers tours in New York, San Francisco, Washington, Chicago, and LA. Prices range from $19 a person for “beta” tours led by new guides to $99 a person for a VIP tour at the Metropolitan Museum of Art in New York, complete with wine break. Museum Hack also offers private tours and will even coordinate a marriage-related outing, upon request.

The general idea of Museum Hack is this: What about museums, but with sex jokes and swearing and a focus on some under-explored art? And the Badass Bitches tour delivers all of the above with a feminist slant.

Museum Hacks aims to topple the patriarchy through art

I went on my Badass Bitches tour at the Met with seven patriarchy-denouncing women and one game-but-sheepish-looking man. It was during Pride month and the Met was celebrating with a few silent discos, which provided a slightly surreal backdrop as we speed walked through the galleries. “I walk like a New Yorker,” our tour guide Elizabeth informed us. “Your job is to keep up with me.”

Elizabeth kicked things off by cheerfully walking us through the Guerrilla Girls’s 1989 protest project, “Do women have to be naked to get into the Met. museum?” That year the Girls found that although 85 percent of the nudes in the Met’s modern art wing were female, only 5 percent of the artists were. By 2012 both percentages had decreased to 76 percent and 4 percent, respectively.

Museum Hack’s 2016 count, according to Elizabeth, is that the amount of art by women in the Met’s modern art wing had risen to 6 percent. “We did it!” she said sardonically. “We solved the patriarchy, you guys!”

Despite the ongoing disparity in representation, though, the idea of the Badass Bitches tour is to celebrate the art by women that does exist at the Met. “We’re gonna celebrate the women in history, the female artists who made great contributions to the world, who are on display at the Met today,” Elizabeth declared.

The Badass Bitches tour is designed to be intersectional and discuss women from multiple artistic traditions. We began with a sculpture of Shaivite saint Karaikkal Ammaiyar — “your patron saint of not giving a fuck,” Elizabeth informed us — and then went to view the Egyptian Temple of Dendur to talk about how Jackie O brought it to the Met while LBJ felt emasculated. We looked at a statue of Hatshepsut and discussed how the legacy of this female pharaoh had been created and maintained, and we spoke about American 19th-century needlepoint and how textile designer Candace Wheeler created the concept of decorative arts.

Interspersed with the stories were a set of games designed to keep the tour from feeling too staid and conventional and to remind us that Museum Hacks is edgy and really wants to reclaim gendered slurs. The games — with titles like “Find a bitch who needs a break!” and “Tell me what this bitch is thinking!” as well as “Name the baddest bitch you know!” — are where the too-much-ness can come into play. The games are all interactive and keep the tour from being too passive an experience but you feel a little bit like you’re on a second-grade field trip and have to fill out your worksheet to get a Yasss Bitch! sticker at the end. (In this case, the sticker is a Polaroid of you posing with a statue.)

What’s more interesting is learning about the under-discussed artists highlighted by the tour: Rosa Bonheur, the Impressionist lesbian who painted animals and got special dispensation from the police to wear pants; Artemisia Gentileschi, the Baroque painter who had her rapist prosecuted and won the case; and a Neolithic woman (unknown to us) who probably created the Met’s oldest figurative sculpture. Elizabeth really did know her stuff, and she was a funny and engaging speaker. She didn’t need party games to keep the tour moving.

But the party games are intrinsic to the “brunch with your friend who is doing the most” ethos of Museum Hack, as well as the whole “we are committed to the idea that repeating the word bitch a thousand times makes us interesting” vibe of the Badass Bitches tour. It’s all fun and it’s all smart, and it’s all just a little bit messy.

For the month July, Museum Hacks is celebrating Ocean’s 8 by knocking $40 off the group ticket price for groups of eight women at the Met. Use code OCEANS at checkout online for the reduced rate and find Museum Hack tours across the country at museumhack.com.

Native Son is an imperfect but mesmerizing adaptation of Richard Wright’s classic novel
Watch live: the House impeachment vote
Live results for the March 10 primaries
What is “quantum supremacy” and why is Google’s breakthrough such a big deal?
DC voters OK pay shift for tipped workers; mayor Bowser wins Democratic nomination
Most Latinos voted for Biden — but 2020 revealed fault lines for Democrats