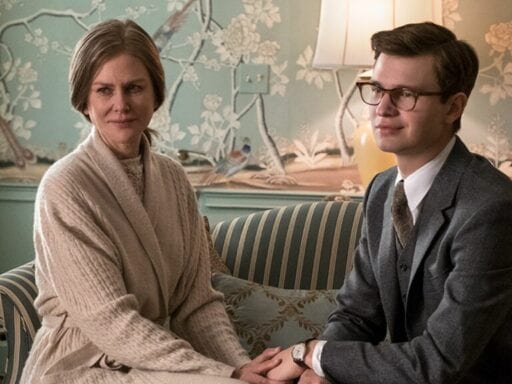 A lackluster adaptation of the Pulitzer-winning novel is unlikely to please even the book’s biggest fans.

It is a truth universally acknowledged that a book’s fans will complain about the movie version, and that’s fine. But more literary adaptations are wrecked by slavish source fidelity than by imaginative tweaks. Movies and books are different media, and they have to tell stories in different ways. As long as the original’s soul is preserved, everyone wins.

Which goes a long way toward explaining why The Goldfinch doesn’t work on screen, or at least not in John Crowley’s adaptation. Donna Tartt’s Pulitzer-winning 2013 novel, a doorstop at nearly 800 pages, meanders (somewhat tediously, for my taste) through the youth and early adulthood of a boy named Theo. Along the journey, it contemplates philosophical matters, like the effects of trauma or blind chance on our life paths, or the possibility of authentic art. It is not an obvious fit for a feature-length film.

The problem lies largely in the screenplay. The Goldfinch was adapted by Peter Straughan, who’s written serious-minded adaptations before, like 2011’s Tinker Tailor Soldier Spy, but also the truly atrocious 2017 The Snowman. I’m not much of a fan of Tartt’s novel, which repeats some of the self-seriousness of her 1992 murder mystery The Secret History (a book I love), but that feature becomes far less enjoyable at the much greater length.

But I think I’d rather re-read The Goldfinch than watch it again. Straughan’s screenplay strips out most of the novel’s heart in favor of plot fidelity, albeit with the pieces told out of order. No longer does it feel like we’re on a journey with Theo. Instead, we’re just observing what happened to him during his life, and there’s no reason to care about any of it.

The Goldfinch wastes most of what was great about the novel, and thus misses the point

Theo (played as a boy by Oakes Fegley and a young man by Ansel Elgort) loses his mother in a terrorist bombing at the Metropolitan Museum of Art and winds up adrift for years, shuttled from a friend’s family to his conniving father’s home in Las Vegas to a life in antique dealing back in New York. Along the way, Theo pines for a girl named Pippa, makes friends with a worldly wise kid named Boris, becomes engaged, sells some antique fakes, and keeps toting around a small 17th century Dutch painting of a goldfinch that he grabbed from the museum in the confusion following the explosion.

Unlike the novel, which unfolds chronologically, the film weaves around in circles without spending too much time anywhere in particular. Thus it mostly wastes its impressive cast, which includes Nicole Kidman, Luke Wilson, Sarah Paulson, and Finn Wolfhard. Only Jeffrey Wright, who plays the antique restorer (and Theo’s guardian angel in the flesh) Hobie, seems to have space to do what he needs in the role — by turns vulnerable and stern and wise and wounded.

Crowley, who made the wonderful 2015 drama Brooklyn, knows how to paint lush domestic spaces, some of which show up here — Hobie’s home and workshop, nestled into the ground level of a brownstone, is the kind of place to which you want to escape permanently. But he’s working with a screenplay that doesn’t give anyone space to breathe, and crowds out space for the philosophical reflection that knit together the book’s seemingly disparate strands.

Because The Goldfinch, at its best, is a story about how seemingly random events direct our lives, and how a momentous, traumatic event can extend long fingers into our futures, even when we think we’ve moved on. (It remains strange to me that the terrorist attack that is the inciting incident of The Goldfinch essentially disappears from the book without having any repercussions beyond its effects on Theo, but the movie is faithful to this as well.)

Yet the true chaos of Theo’s life, the chance encounters and last-minute decisions that determine his life’s direction, play like actual chaos at the novel’s length. Even at a hefty two-and-a-half hours, the film makes these experiences seem contrived. Theo acknowledges his own passivity; he refers to his own life as having a “before” and an “after” the incident, and that stealing the painting is “the one thing [I] did.” Everything else only happens to him: his capers with Boris, his experiences with his father, even his own engagement. But that doesn’t make for a great story.

There’s still the kernel of a great idea here, contained in a scene from before the explosion, in which Theo’s mother explains to him that Dutch paintings are highly detailed, and “even the tiniest thing matters” in them. She refers to painters who leave “secret messages” for the viewer in seemingly simple, even banal paintings — an element left on a table, an item on the wall. A clock can remind you, she said, that things don’t last.

Tartt’s novel comes in at such great length because it’s trying, for better or worse, to emulate that artistic technique. It’s filled with rich, detailed descriptions of the items that fill Theo’s world, all reminders of the importance that mere objects — like, say, an antique table, or a simple painting of a bird — can have in a person’s life. In the film, those are glanced over before we’ve got to move on to the next thing. And in sticking so closely to the plot of the novel, The Goldfinch loses the story, and the soul, of its source.

The Goldfinch premiered at the Toronto International Film Festival and opens in theaters on September 13.

Why Covid-19 case numbers are falling in the US
Hannah Gadsby on comedy, free speech, and living with autism
Mindfulness meditation in America has a capitalism problem
Even Senate Republicans want the White House to share a whistleblower report on Trump
Hurricane Laura’s flooding and other impacts on the ground: What we know
Six key moments from Amy Coney Barrett’s Supreme Court hearing