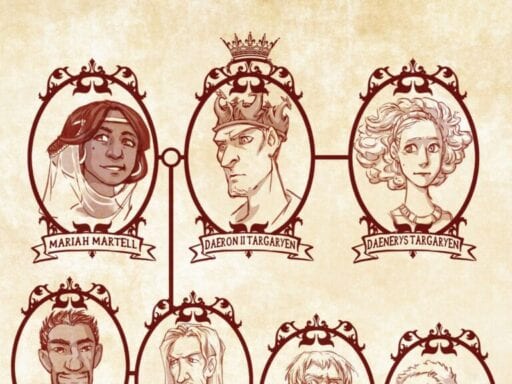 Need to prepare for House of the Dragon? Try this beautifully illustrated history lesson.

HBO’s forthcoming Game of Thrones prequel series, House of the Dragon, will explore the complicated dynasty of the Targaryens, the once-mighty clan whose dragons propelled their rise to power — but whose love of fire helped stoke their eventual ruin.

The new 10-episode series will take place approximately 300 years before the events of Game of Thrones and will follow the events surrounding Aegon I Targaryen’s conquest of the Seven Kingdoms. Don’t know who Aegon I is? Not to worry: This ultimate Targaryen family tree — created by a fan of both Game of Thrones and the novel series they’re based on, George R.R. Martin’s A Song of Ice and Fire — will help prep you for the history lesson to come.

Maryon B. is a 30-year-old French freelance artist and video game developer currently living in Helsinki. She’s also a die-hard Game of Thrones fan, which might explain why she’s illustrated the entire lineage of House Targaryen (home of one Daenerys, Mother of Dragons) — even though, as she says in her description of the project on DeviantArt, “I DON’T EVEN LIKE HOUSE TARGARYEN WHY DID I DO THIS[?]”

“I actually started the tree out of spite because all their descriptions (and fan representations) make them look the same — beautiful, silver-haired and purple eyes,” she told Vox via email after she published the family tree in 2016, “and it frustrated me to see them as elf-clones.”

The result is a gorgeous take on the lineage of House Targaryen. As Game of Thrones fans have heard time and again, this powerful family unified the Seven Kingdoms and ruled over the fictional land of Westeros until Robert Baratheon overthrew the “Mad King,” Aerys II, better known as Daenerys’s deceased father.

But if you think that portion of the Targaryens’ legacy is confusing, consider that the full family tree contains more than 100 characters and spans 16 generations of entirely fictional history (click here for the full-size version):

HBO’s new prequel series, House of Dragons, will most likely focus on Aegon I Targaryen and his immediate family. That’s the guy with the determined scowl in this section of the family tree:

Aegon I was the man who began the Targaryen dynasty through his conquest of the Seven Kingdoms, known as Aegon’s Conquest. George R.R. Martin unfolds this history in Fire and Blood, his companion book to A Song of Ice and Fire. The Targaryens lived at Dragonstone — the ancestral castle we saw Daenerys triumphantly returning to at the end of Game of Thrones’ penultimate seventh season — and the new prequel series will undoubtedly spend lots of time there.

Aegon I was said to be a fierce and focused, but pious and merciful ruler. He also married both of his sisters, as you can see in the image above — which should make the sexual politics of the new series quite interesting.

The Targaryen family is full of fascinating stories of heroes and intriguing characters who add color to Westeros history books. Here’s a look at a few of the characters from this broad tapestry.

Alyssa Velaryon joined the Targaryen dynasty by marrying Aenys I, Aegon I’s son. Aenys was a politically wily man who took the throne amid great upheaval. They had six children before Aenys was killed and Alyssa taken hostage by her husband’s half-brother Maegor. (And from there, things get really complicated.)

One of Alyssa’s great-granddaughters was the second Rhaenys Targaryen. Known in the annals of Westeros history as the “queen who never was,” Rhaenys was a dragon rider whose claim to the throne was passed over in favor of her brother. She married Corlys Velaryon and died fighting a battle on dragonback at the age of 52.

Further down the family tree, there’s House Blackfyre, an illegitimate house sanctioned by the lust-ridden King Aegon Targaryen IV, who’s generally considered the worst king ever. His decision to legitimize all of the bastard children he fathered with his many mistresses — announced from his deathbed — prompted five generations of battles for the throne known as the Blackfyre Rebellions.

Maryon says she got into Martin’s novels and related writing during the long hiatus between seasons two and three of Game of Thrones. She started the Targaryen family tree project more or less on accident after drawing Baelor Breakspear and Maekar, characters who figure prominently in Tales of Dunk and Egg, Martin’s collection of related novellas set in the Song of Ice and Fire universe. Naturally, the project spiraled:

[I]t got me interested in their ancestors, so I worked from there. At first I never thought I’d do the whole bunch, but it’s when I realized that I was already halfway through just by making Maekar’s descendants that I gave in: “While I’m at it, might as well do the rest…”

Maryon says the project turned out to be “a very challenging artistic exercise, to keep on coming up with facial variety all while maintaining the same ‘silver hair-purple eyes’ features and some genetic similarities.”

“I had to find inspiration and study some real people’s faces so I learned a lot since I started.”

Above all, a look at the full family tree reveals how often and how strategically the Targaryens secured the future of their line by marrying into other powerful families like the Martells, the Baratheons, and the Velaryons, just as many figures in real-world history have done. And when Maryon was finished, she says she’d actually become fonder of the Targaryens than she was when she began:

“[I]n the end it made me appreciate House Targaryen much more since now I share a personal story with each and every one of them, and I would suggest anyone who likes Game of Thrones to be curious about them because they have a lot of stories to tell.”

You can see these and many more excerpts from the Targaryen family tree, as well as other Game of Thrones portraits, on Maryon’s DeviantArt page. She’s stated she hopes to eventually produce a print version of the full family tree, but in the meantime she’s also started another ambitious project for another complicated Game of Thrones clan: a family tree for the Freys.

Why Iran is still attacking American troops during the pandemic
Trump cancels an imminent US-Taliban peace deal over a deadly attack
A whistleblower alleges Trump requested 2020 election interference. Pelosi still says she won’t purs...
How Joe Biden, the ultimate insider, defeated Donald Trump, the ultimate outsider
Why Trump and Pelosi are caught in a bitter, petty game of one-upmanship
Now that Netflix has more streaming competitors, it suddenly cares about ratings