Tulsi Gabbard vs. the DNC: her complaint about debate exclusion, explained 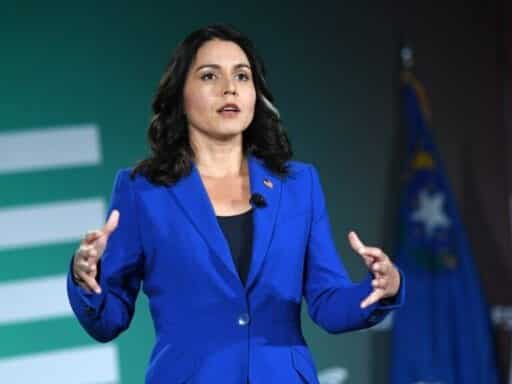 The deadline to meet the Democratic National Committee’s requirements for the third Democratic presidential debate came and went at the end of the day on Wednesday — and it turned out Rep. Tulsi Gabbard (D-HI) was not among the 10 candidates who made the cut. But while there’s a very straightforward explanation for Gabbard’s exclusion, she’s instead suggesting she was the victim of some sort of DNC conspiracy.

In cable news interviews on Wednesday and Thursday, Gabbard claimed the DNC’s process for determining who made the debate stage lacked “transparency” — the implication being that she may have been singled out.

On Wednesday night, Gabbard went on Tucker Carlson’s Fox News show for an interview. Before it began, Carlson introduced her by framing the situation in the most conspiratorial manner possible.

“She is young, she’s progressive, she’s an Iraq war veteran but she stands alone among the Democratic candidates in opposing starting wars, like Iraq or bombing Syria,” Carlson said. “Therefore, the Democratic Party appears eager to sideline her. Gabbard has done well in a number of recent polls but the Democratic Party does not recognize those polls, and may use that to keep her off the debate stage next month.”

“Here’s the situation: there’s a whole bunch of different polls that have come out. The DNC has only recognized some of them as being qualifying polls for the debate,” she said. “The whole thing gets a little bit confusing. You’ve gotta jump way down into the weeds of the numbers and statistics, but I think the bigger problem is that whole process really lacks transparency.”

The next morning, Gabbard went on CNN for an interview with Jim Sciutto in which she encountered a bit more pushback.

After Sciutto noted that the DNC has in fact been transparent for months about the polls they’re using to determine who qualifies for the third debate, Gabbard basically tried to change the topic.

“We could get into a whole of details about, you know, demographics and where exactly these polls are taking place, and more importantly where they’re not taking place. I don’t think we have the time to get into that here,” she said.

Rep. Tulsi Gabbard: “There’s no explanation or transparency around why certain polls are qualifying while other very credible, recognized polls are somehow not qualifying… Frankly the DNC has not provided any transparency to voters about how they’re making these decisions.” pic.twitter.com/C4hUwiFBMK

Sciutto moved on with the interview without pressing the point further, but his line of questioning exposed just how flimsy Gabbard’s “transparency” argument really is.

Why Gabbard won’t be on the debate stage next month, briefly explained

The DNC announced the criteria for qualifying for the third debate back in May — before the first and second debates, which featured an unwieldy total of 20 candidates spread over two nights.

My colleague Andrew Prokop explained the exact thresholds the DNC determined candidates had to meet to make the third round:

— These can be either national polls or early state polls (of Iowa, New Hampshire, Nevada, or South Carolina).

— These polls must be conducted by one of these organizations: CNN, Fox News, CBS, ABC, NBC, the New York Times, the Washington Post, the Wall Street Journal, USA Today, the Associated Press, NPR, the Des Moines Register, Monmouth University, Quinnipiac University, the University of New Hampshire, or Winthrop University.

— One catch is that a candidate cannot use multiple polls by the same organization covering the same geographic area. (For example, if there are two NBC national polls showing a candidate meeting the threshold, only one of them will count).

Gabbard met the donor threshold, and she also hit 2 percent or more in several polls. The problem for her is that only two of those polls were from the organizations the DNC listed above — meaning she needed two more approved polls to qualify for the debate.

As it became apparent that she wasn’t going to meet the polling requirement, Gabbard called on the DNC to change the rules. On August 23, she released a statement calling on the DNC “to revise their list of debate qualifying polls to ensure transparency and fairness in light of numerous irregularities in the selection and timing of those polls.”

The statement notes that Gabbard “has exceeded 2 percent support in 26 national and early state polls, but only two of them are on the DNC’s ‘certified’ list.” Most of those are online-only polls from three organizations (YouGov, Change Research, and HarrisX), but some traditional phone polls are also on her list.

It may sound odd that the DNC will accept poll results from some organizations and not others, but the organization had to draw the line somewhere rather than accept any shady random poll. It’s true that the committee has not gone into great detail about how they came up with this specific list of approved organizations, but they are generally among the most well-regarded pollsters using traditional methods.

In any case, the committee made the rules public and clear months ago, meaning the true “interference” would have been changing them late in the process.

The bottom line is that the DNC had to determine some set of criteria to winnow the debate field down. They did so and gave the campaigns plenty of lead time to try and meet it. Gabbard, unfortunately for her, did not. The system was not rigged against her.

Gabbard isn’t alone in raising concerns, but she is in suggesting a conspiracy is at work

Gabbard is not the only candidate who didn’t qualify for the debate and is now raising concerns about the process the DNC used to winnow the field down. Sen. Michael Bennet, in particular, has also been an outspoken critic of the DNC’s process.

Sen. Michael Bennet said there should be an additional criteria for getting into debates. “I think it would be useful to consider past performance. Have you won a statewide race? If so, you can be on the debate stage,” Bennet said. https://t.co/AwTY8StZVy

To an extent, complaining about the rules is just something politicians do to explain away outcomes that aren’t favorable to them. But the insinuations Gabbard teamed up with Tucker Carlson to make about the DNC’s alleged lack of “transparency” echoes the ugly 2016 Democratic primary, when the DNC came under criticism for working behind the scenes to favor Hillary Clinton instead of Bernie Sanders. Even though Sanders ultimately received nearly 4 million fewer votes than Clinton, he has complained that the primary was “rigged,” and now Gabbard is suggesting something similar is happening this time around.

If Gabbard’s complaints about the DNC resonate, the risk is that the Democratic Party nomination process may be seen as tainted — and thus hand President Trump a talking point he can use to (again) try to demoralize would-be Democratic voters.

Bernie Sanders is being treated very badly by the Dems. The system is rigged against him. He should run as an independent! Run Bernie, run.

It proved to be too hard for Gabbard, but all is not lost for her yet. She can still make the cut for the fourth Democratic debate in October, if she meets the same polling requirement that was operative for the third one (she only needs two more qualifying polls to get there).

Why Alaska Natives pushed Sen. Lisa Murkowski to say no to Brett Kavanaugh
Trump attempts to clean up after Putin meeting: “I have GREAT confidence in MY intelligence people”
Bernie Sanders wins the Democrats Abroad primary
Lunar eclipse 2019: how to watch this “supermoon” turn blood-red tonight
How small businesses can get money from the stimulus package
Liberal celebrities’ attacks on Fox News are as much about timing as anything else