Vaccinate the turkeys (and the chickens) 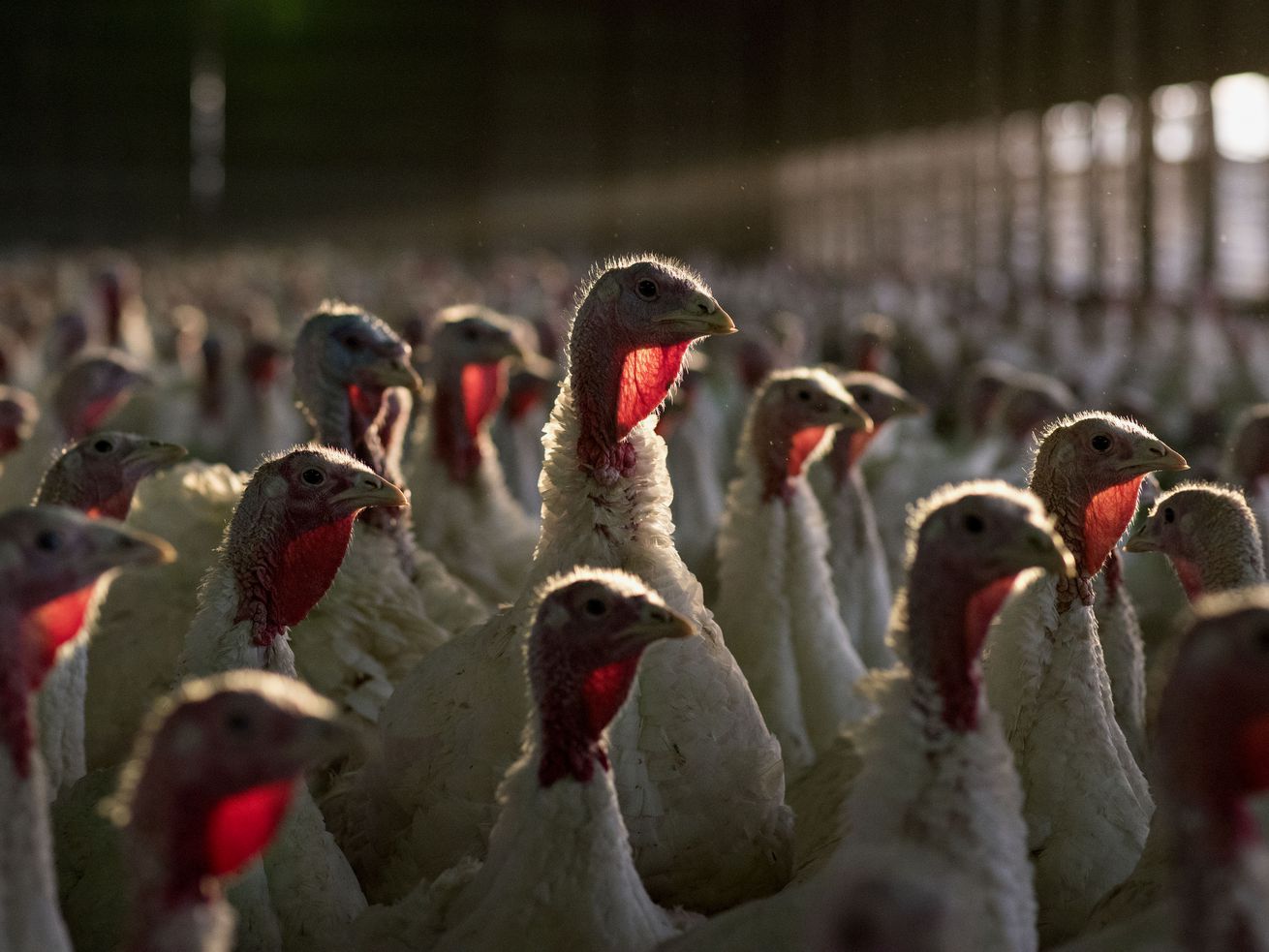 Bird flu is driving up turkey and egg prices — and killing millions of animals. Why won’t we vaccinate against it?

If turkey’s at the center of your table this Thanksgiving, it’s going to be a more expensive meal than usual. Consumers are spending around 20 percent more on the centerpiece bird than last Thanksgiving.

Some of that can be blamed on inflation, as farmers grapple with higher feed, fuel, and labor costs. But the price hikes are also connected to the nasty Eurasian H5N1 virus, a highly infectious avian influenza burning through poultry flocks around the globe.

So far this year, 8.1 million turkeys in the US have died due to the bird flu — about 3.7 percent of the 216.5 million farmed each year — along with over 40 million chickens. But most don’t die from the virus itself. Rather, they’re culled, or proactively killed, in a brutal effort to prevent the virus from doing even more damage.

The virus is excruciating for infected birds, with a mortality rate as high as 100 percent for chickens. But birds that aren’t infected yet must be culled per US regulations, and they may have it even worse than the sick: The two most common cull methods are suffocating birds with foam, and employing “ventilation shutdown,” in which the birds are cooked alive by closing off vents so temperatures inside the barn rise and the birds slowly die by heatstroke. This particularly inhumane method was used as a last resort in the 2015 US bird flu outbreak, but has become a much more commonly used method in this year’s outbreak.

The carnage has caught the eye of Sen. Cory Booker (D-NJ), who just introduced legislation to ban the two methods.

While farmers have always had to contend with animal disease, in recent years avian influenza has grown into a serious crisis. During the 2015 outbreak, more than 50 million birds in the US — mostly egg-laying hens — had to be culled, causing $3.3 billion in economic losses. Europe is experiencing its worst bird flu outbreaks in history, while this year’s US outbreak is on the cusp of killing even more animals than in 2015.

Avian flu outbreaks are most common in the fall and spring, as wild birds — the natural reservoirs of the virus — migrate and shed it through fecal droppings, saliva, and nasal secretions. Those contaminants can in turn land on farm equipment, farmworker clothing, or in animal feed, and then spread like wildfire through factory farm operations that can house hundreds of thousands, or even millions, of animals. Outbreaks usually subside during the summer, when wild bird migrations cease — but not this year.

“It’s constantly hitting,” said John El-Attrache, global director of science and innovation at the US vaccine developer Ceva Animal Health. Some experts worry the highly pathogenic bird flu could now be with us year-round.

Researchers speculate the strain is mutating to spread more efficiently than previous versions. Bird flu has even become a conservation problem, as the new strain is infecting twice as many species as during the 2015 outbreak, including vulnerable species like puffins and the endangered bald eagle, along with more mammals than usual.

Make no mistake, a major reason why bird flu is so destructive in the US is that factory farms — with so many chickens and turkeys in such close quarters — are the perfect playing field for the virus, which is why farmers are so quick to cull infected flocks. But that very fact raises a simple, but surprisingly controversial question: If avian flu is so deadly and so economically destructive, why on earth aren’t we vaccinating birds against the virus?

Why we’re quicker to cull than vaccinate

A sobering lesson from the Covid-19 pandemic is that even the best vaccine isn’t good enough on its own to stop a deadly disease — economic self-interest and lack of international coordination can squander good science. The same is true in the global push to stop the bird flu.

There are H5N1 vaccines on the global market — Kansas-based Ceva Animal Health’s vaccine is administered in-ovo (in the egg) or on the day chicks are born, and is 80 to 100 percent effective for almost five months. It’s licensed in the US, as are vaccines by Zoetis and Merck, but none are approved by the USDA for actual use because they would interfere with global trade. Bird flu vaccines are used primarily in countries where bird flu is endemic — meaning outbreaks occur regularly — and which have little to no international poultry trade, like Indonesia, Egypt, and Mexico.

For countries in which poultry exports make up a big share of the industry’s revenue — such as the US and many European countries — vaccines have largely been a nonstarter, even though they have the potential to severely limit the death toll of mass culling. Why? Blame the “DIVA” problem.

DIVA is short for “differentiating infected from vaccinated animals” — the challenge of identifying whether a bird is actually infected with avian influenza, or just has avian influenza antibodies after vaccination. Countries fear that importing eggs or slaughtered meat from vaccinated birds in countries where the virus is circulating could inadvertently spread it within their own borders by introducing the virus to wild or domesticated animals through discarded raw meat. That means that big poultry exporters like the US — which sends 18 percent of its poultry abroad — don’t vaccinate, for fear they’ll miss out on a huge part of their revenue: international trade.

“It’s very simple — if one country is not exporting to somewhere, somebody else will take that slot,” said Carel du Marchie Sarvaas, executive director of HealthforAnimals, a trade group that represents animal vaccine developers.

And without international coordination and predictable vaccine use, it doesn’t make economic sense for vaccine makers to invest in developing vaccines that protect against the bird flu. “We’re not going to make [massive investments] unless we’ve got major markets on board,” said du Marchie Sarvaas. “And the only way you’re going to get major markets on board is if you get some sort of political deal. And that comes to the trade point and the export point.”

In other words, the bird flu vaccine problem isn’t just a veterinary challenge. It’s also a geopolitical coordination challenge, a classic game theory problem where no major poultry-producing country wants to be the first to vaccinate. As a result, everyone sticks with the kill ’em all approach. And vaccination isn’t cheap, so producers and governments have to weigh the cost of vaccination against the cost — and the PR hit — of killing tens of millions of animals in grisly ways. The rapidly evolving nature of the virus also means existing vaccines will offer less protection against future strains.

But despite the trade and vaccine development challenges, the conversation has been quickly shifting, especially in Europe.

“We need to vaccinate”

In May, agriculture ministers in the European Union agreed to develop a bird flu vaccination strategy to complement the bloc’s efforts to stamp out the disease, a major departure from the standard “eradication” approach. And there’s a race underway in the Netherlands and France to update old vaccines to protect against the current strain decimating flocks. Several companies and researchers in the US are working on new vaccines as well.

Nowhere were those rumblings louder than at a late October meeting in Paris of bird flu researchers, government officials, and poultry companies, convened by the World Organization for Animal Health — the veterinary counterpart to the World Health Organization. “The goal of this meeting was vaccination,” El-Attrache told me. “That was never the goal of these meetings prior.” At the end of the Paris meeting, a majority of delegates informally voted to support preventive vaccination if trade barriers were resolved, according to the journal Vet Record.

There is concern in scientific circles that since existing vaccines aren’t 100 percent effective in the long term, there could still be birds who don’t show clinical signs of H5N1 but are infected and could spread the virus to other birds, a phenomenon known as silent infection.

But Leslie Sims, an avian influenza expert who’s led vaccination programs in Asia, said at the Paris meeting that research about the threat of silent infection could be “overinterpreted.”

“There’s no logical reason why we can’t design systems to allow us to make sure that in places where a vaccine is being used, it’s being used in a way which retains zero tolerance for infection,” Sims said.

“My experience is that it can be done,” Capua said. “Italy never sent or spread any of its viruses to any of its neighboring countries [and trade partners], and in Europe we are one market.”

In an email to Vox, Sims pointed to Hong Kong, the site of the first major H5N1 outbreak among humans in 1997, as a model for how to achieve zero infections with vaccination and advanced disease surveillance. Although Hong Kong doesn’t export poultry — so it need not worry about trade — its multilevel surveillance system is highly effective, he said, and includes “checking all vaccinated flocks to make sure they have responded to vaccines, tests on birds prior to market, tests on dead birds in the wholesale market, and regular retail market surveillance for detection of avian influenza viruses.”

“It really is a question of political trust and trust-building between the major manufacturers,” said du Marchie Sarvaas. There would need to be agreement and coordination on disease surveillance, regular technical and political discussions, and efforts to prevent using vaccination, or lack of vaccination, as a marketing ploy — by stoking fear over silent infection or anti-vaccine sentiment.

“The industry knows there’s no room for complacency; surveillance, biosecurity, and good flock management have proven to be effective in preventing AI [avian influenza] but sometimes only to a certain extent,” said Robin Horel, president of the International Poultry Council, in an email. “Therefore, vaccination could be a useful additional tool if and when used in a well-established regulatory framework.”

Experts told me that while the conversation around vaccinating poultry in the US is opening up, it’s still early days. Before vaccines are approved for market, the political and trade barriers would need to be solved, and vaccine development and manufacturing would need to be ramped up.

A vaccination campaign in the US probably wouldn’t result in the poultry industry vaccinating all of its 9 billion birds. Instead, it might focus on egg-laying hens and turkeys, as they’re more vulnerable to avian influenza than other birds. Chickens raised for meat, known as broilers, account for around 95 percent of poultry and are much less likely to contract the virus because they’re killed at just about 45 days old. Following this logic, the poultry industry could mitigate much of its bird flu risk by vaccinating just a few percent of its national flock.

Capua added that it would also make sense to prioritize vaccinating chickens and turkeys raised near the migratory pathways where wild birds shed the disease.

There’s also the potential risk of human infection from bird flu, or even the start of a new flu pandemic. Earlier strains of the H5N1 avian flu virus killed more than half of the 865 people who contracted it between 2003 and 2022, according to the World Health Organization — though the strain that’s currently tearing through poultry flocks is reportedly much less transmissible and less severe for humans. There have been only a few reported cases in Western countries this year, none severe.

But that doesn’t mean it couldn’t evolve to efficiently transmit between humans, a nightmare scenario for avian influenza experts — and another reason to consider vaccinating birds despite trade fears. “We don’t know if an H5 virus will ever ignite a pandemic [in humans],” Capua said. “But if it does, it’s not going to be like Covid — it’s likely going to be worse, like much worse.”