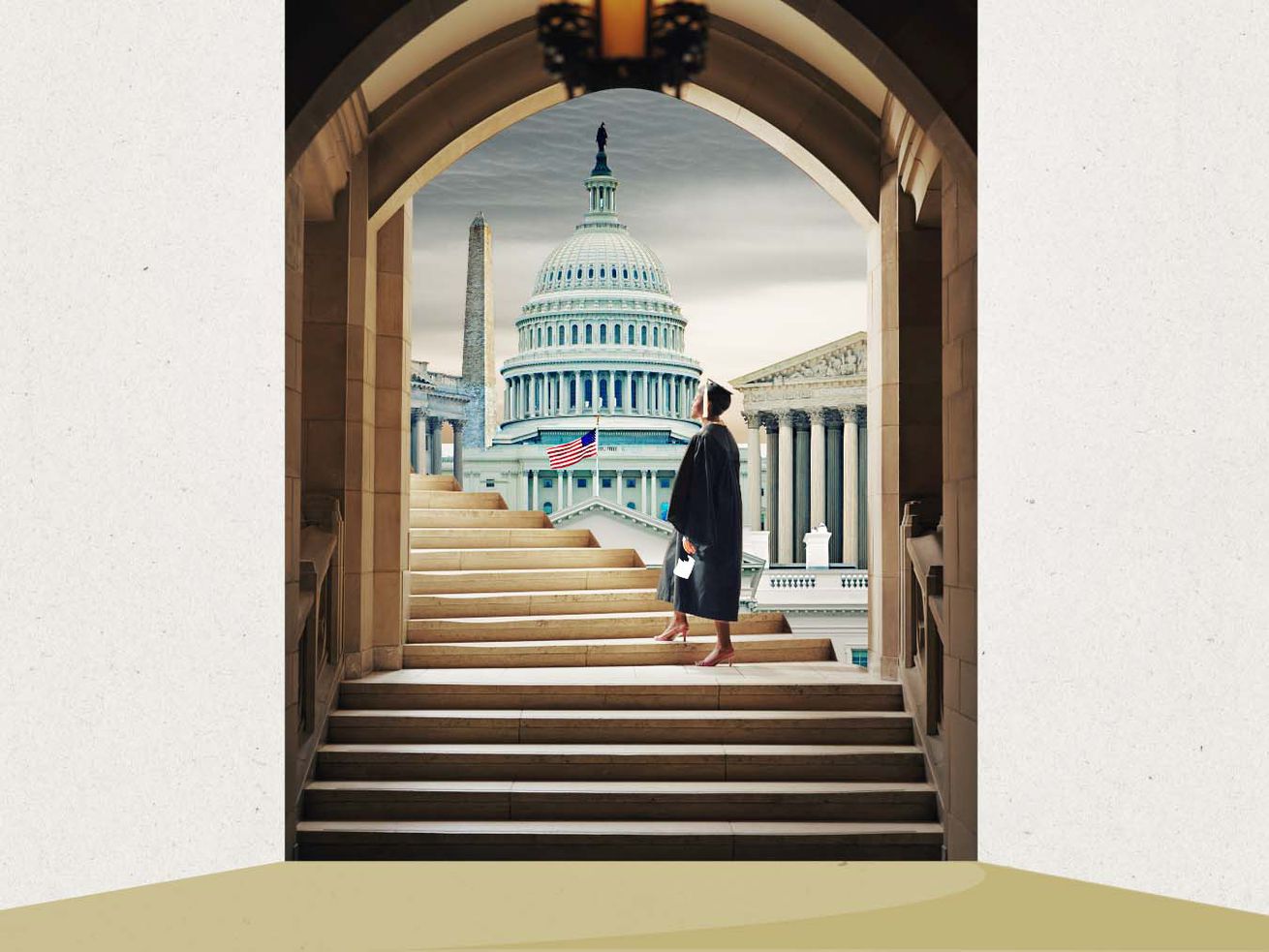 Canceling student loans might not be as big of a midterms boost for Democrats as they’d hoped.

Seven weeks out from the midterm elections, Democrats are facing better prospects than when they entered the summer of 2022. Inflation has improved, gas prices are dropping, and as they go back home, congressional Democrats can claim a host of accomplishments from their time in DC.

But there’s one “win” some Democrats are concerned may be more of a liability than an asset: the Biden administration’s plan to cancel up to $20,000 in student loans.

Before the plan became a reality, the country was split in its support of debt forgiveness: Republicans largely opposed it, but it had long been a hit among a large subset of younger voters, according to progressive pollsters. Now, polling shows a stark partisan split in support for the plan, and concerningly for Democrats in tight races, soft support among independents.

Timed curiously after a score of legislative wins and a few months before elections, the announcement sparked outrage among conservatives who thought the bailout was unfair to those who did not seek a college education or had already paid off their loans. At the same time, the policy announcement landed as President Joe Biden saw a rebound in support, especially among younger Americans. But on the campaign trail, the plan hasn’t made the positive electoral impact that many proponents had touted as one of the political advantages of forgiving student debt. And it’s providing fodder to Republican candidates wholly opposed to Biden’s economic agenda.

That’s part of the reason a handful of vulnerable Democratic incumbents (and challengers) criticized the policy when the White House announced it. Some of those campaigns have since told me that they either aren’t making it an issue in their races or simply aren’t hearing much about it from Democratic voters.

Negative blowback to the policy hasn’t yet registered in polling on what’s motivating voters, but there’s still time for either side to make it an issue. If Republicans are successful in doing so, some Democrats worry the policy could cost them badly needed support in swing states and races, and could eat away at their chances of keeping a Senate majority while limiting losses in the House.

Biden faced a lot of pressure to relieve student loans. The benefits might not be as large as promised.

Biden had already extended the moratorium on student loan payments four times ahead of his August 24 announcement and had been hesitant to commit to loan cancellation for most of his first year in office. He’d faced criticism from progressives in his party and from advocacy groups, including the charge that he was breaking a campaign promise (even though he never committed to full loan cancellation). In response, he gave himself a September deadline and promised a decision on debt relief or another extension of the moratorium.

This year’s spring and summer, however, delivered devastating approval numbers for Biden, driven in large part by high inflation. The president and his party were shedding support from young voters and liberal Democrats — and his numbers with independents were underwater. Many progressive advocacy groups and student loan relief activists argued that erasing student debt would be one easy, major way to stop the bleeding.

Polling leading up to the decision showed a divided country. Nationally, more than six in 10 Americans supported some kind of student loan forgiveness in a February Data for Progress poll that student loan relief champions used as evidence of popularity. But complete loan forgiveness had the support of only a quarter of respondents. Broken down by party and age, a majority of Republicans and a plurality of older Americans opposed any action, while half of Democrats and a plurality of young Americans and independents backed some, but not all, debt cancellation.

That partisan split still exists. The country is divided nearly in half in support and opposition to Biden’s policy, and it’s unpopular with independent and Republican voters, according to a Politico/Morning Consult poll taken immediately after the announcement. Support from independents remains roughly equally divided, while Republicans have grown more opposed to it.

Before Biden’s announcement, there was a risk that such a decision, which helps many (but not just those) in the Democratic base, could alienate swing voters — independent, working-class, and non-college-educated voters — that Democrats in tight races are trying to persuade. Now the divide that shows up in national polling has sparked concerns from pundits, political strategists, and vulnerable Democratic candidates that aside from placating the left flank, there might not be a tremendous political boost.

Regardless of the electoral effect, the most progressive constituents of the Democratic party say the Biden action was worth it because it will energize voters disillusioned with Democrats. “It helps galvanize the base to understand that Biden and the Democrats are listening,” Dakota Hall, the executive director of the Alliance for Youth Action, told me. “It’s a sign of good faith that Biden did this before the election, to show the base that he is listening, that he wants to make good on his promises.”

Vulnerable candidates don’t want to make it a big deal

It remains to be seen, however, just how much student loan forgiveness will bring out young voters. It’s important to remember that even young voters were split on just how much debt relief to support (a third opposed any action earlier this year). Some of the speculation about the policy’s impact on younger voters rests on the common wisdom that younger Americans are more progressive than older cohorts, but that is only partially true. Young Americans are still more moderate than you might expect.

What is apparent is that Biden’s action is not as popular with the kind of voter that tends to matter in midterm elections in swing states: older white Americans and independents. And Republicans in battleground states are already folding criticism of student debt relief into their bigger case against Democrats centered around inflation and economic mismanagement in states like Arizona, Nevada, Florida, and Wisconsin.

That has many campaigns in swing states concerned. And because of that, they aren’t necessarily talking up the policy in the general election, either to not unsettle independent voters or to avoid giving Republicans more fodder to attack them.

In swing-state Ohio, where Rep. Tim Ryan is in a tight race with former venture capitalist and author J.D. Vance for an open seat, Ryan has openly opposed Biden’s plan.

“Tim believes using executive action to wipe away six-figure earners’ debt goes too far,” his communications director Izzi Levy told Vox in a statement. “[He] believes the administration would have been better served by prioritizing across-the-board economic relief that benefits all working- and middle-class Ohioans, whether or not they attended college.”

A member of Ryan’s campaign leadership told me that his stance is due to both the working-class nature of the state’s electorate (only about a quarter of the population has a college degree) and because voters haven’t really brought it up in conversation, as opposed to topics like inflation and affordability.

In Colorado, a swing state that is trending Democratic, Sen. Michael Bennet also criticized the president’s plan, saying in August that “the administration should have further targeted the relief, and proposed a way to pay for this plan. While immediate relief to families is important, one-time debt cancellation does not solve the underlying problem.”

About four in 10 Coloradans have a college education, but a Bennet campaign spokesperson told me that he hasn’t heard much about student loan cancellation on the trail. “Costs, climate, and public lands are top of mind,” the spokesperson told me. “Most of all, we’re hearing concerns abortion will become illegal following the SCOTUS decision on Roe.”

It’s hard to gauge just how much student debt relief is motivating voters without specific polling in each state. In Nevada, for example, 61 percent of voters polled oppose the action, according to a recent Emerson College poll. That survey also showed the ultra-right-wing Republican election denier Adam Laxalt with a one-point lead against incumbent Democratic Sen. Catherine Cortez-Masto, who has struggled to maintain high support throughout her reelection campaign. Cortez-Masto also came out against the plan after it was announced. In neighboring Arizona, however, incumbent Democratic Sen. Mark Kelly has endorsed the president’s executive action. No recent in-state polling shows how people feel about the policy, but Arizona has more than 30 percent college-educated residents to Nevada’s more than 25 percent.

Still, it may be too early to judge the effect student loan cancellation is having on races or whether, despite Republican attempts to make it an issue, it will have any effect at all. The policy is most popular with a very specific subset of the country Democrats often see as their base: younger Americans, college-educated voters, and fervent liberals — the sort of voters who would have likely voted for Democrats even if loans had not been forgiven.

Ultimately, the policy might have had the effect of stopping the bleeding of support that Biden and Democrats were experiencing among their base, and changing the narrative of whether Democrats — especially young ones — would be as motivated or engaged to vote this year as Republicans.

There are also plenty of other issues taking precedence in voters’ minds, especially inflation for independents and young voters, and abortion for college-educated and white Democrats. Republicans may find opportunities to tie debt relief to inflation worries (plenty of Americans are worried about the effect of loan cancellation on inflation), but as a standalone issue, running on or against student loan cancellation seems like a wash.

Politics aside, when the action goes into effect next year, it may be one of the most recent direct pieces of evidence that government and electoral politics are capable of delivering tangible, positive effects for a swath of working people, people of color, and younger Americans who held debt that was forgiven. That shouldn’t be understated. For now, though, student loan relief seems like a slight political vulnerability likely to be outweighed by deeper, longstanding economic and social concerns that are already motivating the voters most likely to cast ballots.