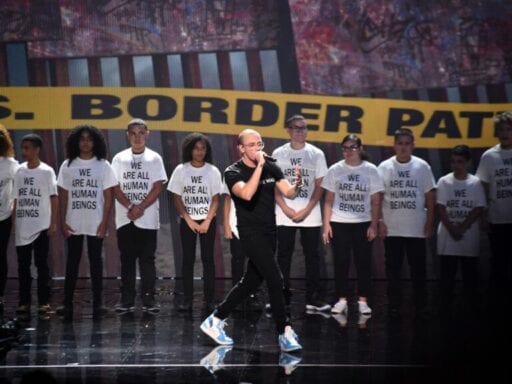 Logic performed alongside immigrant children and parents during the 2018 VMAs.

In a performance of his song “One Day” at the 2018 MTV Video Music Awards, rapper Logic and Ryan Tedder took the stage alongside hundreds of immigrant children and their parents.

The performance echoed the song’s recently released music video, which also addresses the ongoing immigration and family separation crisis. As hundreds of kids filed onstage to stand behind Logic as he rapped, “We do it for the children,” the emotion of the moment struck home — especially when it was revealed that the shirts the children wore were emblazoned with the words “We Are All Human Beings.”

Among those onstage with Logic was 15-year-old Jefferson Arpi of the immigrant youth-led organization United We Dream, whose father has been detained for nine months. “I’m so excited to have performed with Logic tonight,” he said in a statement released by MTV. “It meant a lot to me to be able to represent my family because my dad, Manuel Arpi, is in a detention camp. Logic’s music video showed that even though our families face a lot of pain, we are strong, we are fighters, and we are human.”

The press release for the performance called it a protest against the Trump administration’s separation and detention policy, and came on the heels of the show’s opening monologue from Kevin Hart and Tiffany Haddish, in which they laid into the president’s Twitter habits and Hart mentioned he supports the US national anthem protests.

How powerful was that @Logic301 performance?! #ICONIC #VMAs pic.twitter.com/6sXrVC9PRh

“One Day” is also the second time in as many years that Logic (whose shirt read “F*ck the Wall”) has used the VMAs stage to make a point: His performance of “1-800-273-8255” (named for the number of the National Suicide Prevention Lifeline) at the VMAs last year was meant to boost awareness of resources for suicide prevention. Logic performed alongside 50 suicide attempt survivors and loss survivors, and according to a press release, the performance contributed to a 50 percent spike in call volume to the lifeline in the hours following the show.

Some Oracle employees plan to walk off the job to protest Larry Ellison’s Trump fundraiser
Biden’s labor secretary says gig workers should be considered employees
Our environmental practices make pandemics like the coronavirus more likely
Americans tend to see disease as a personal failure. That’s a terrible way of thinking about it.
Why Colorado thinks it has a chance to make oil companies pay for climate change
Bernie Sanders’s housing-for-all plan, explained