10 legal experts on the future of Roe v. Wade after Kennedy 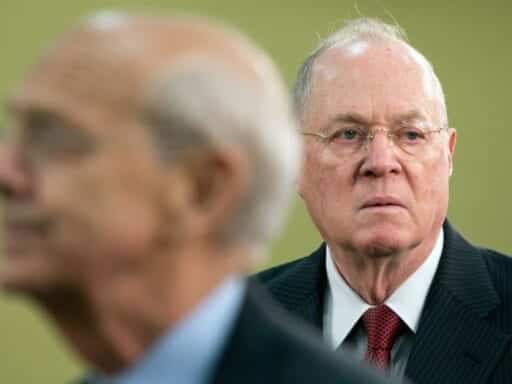 His decision to retire could lead to more “incremental” attacks against the landmark decision.

Supreme Court Justice Anthony Kennedy’s retirement announcement has spurred a raft of questions about how key legal precedents could shift under the tenure of a likely more conservative replacement — and chief among these is the fate of Roe v. Wade.

The landmark 1973 case that guaranteed women’s legal right to an abortion has been on conservatives’ target list for some time, and although Kennedy was appointed by a Republican president, he frequently sided with the liberal wing of the court and acted as a swing vote on cases preserving abortion rights.

In 1992, Kennedy was the deciding vote in Planned Parenthood v. Casey, the decision widely considered to “save” Roe v. Wade. More recently, he also voted with the majority against regulations designed to shut Texas abortion clinics down.

As Vox’s Dylan Matthews writes, Kennedy’s departure gives anti-abortion activists a potential opening to further chip away at these protections — even if the likelihood of a wholesale overturning of Roe remains slim.

Here’s what 10 legal experts had to say about what Kennedy’s retirement could mean for the future of abortion rights.

I expect that Justice Kennedy’s departure likely will impact the status of Roe and Casey, though I don’t expect the Court to overturn Roe immediately.

Instead, I expect we’ll see more incremental pullback, at least initially. But in practice it will become even more difficult, and in some states practically impossible, for women to exercise the right recognized in Roe and Casey of making the ultimate choice of whether or not to bear a child.

The most recent abortion case strengthened abortion rights, and there has been no groundwork laid for a decision reversing Roe tomorrow. Roberts and Alito have never written an opinion saying Roe should go.

So I think that it is more likely that we will see a more subtle or gradual attack on Roe — a series of cases chipping away at legal abortion. Or an effort to establish that almost no abortion regulations (or literally no abortion regulations) create an undue burden — the standard now used to measure the constitutionality of abortion restrictions.

Assuming as I think we safely can, that Justice Kennedy is replaced by someone who opposes legal abortion, his retirement is likely to impact the existing constitutional right of women to choose abortion in cases of unwanted pregnancies not so much because it will bring about the immediate reversal of Roe v. Wade but, because it makes it more likely that the Supreme Court will give the states more room to decide what regulatory constraints on abortion are valid.

The Supreme Court could use any of dozens of cases already pending in federal court as the vehicle to revisit abortion rights under the Constitution.

[These cases] are already in the federal courts and could get appealed to the Supreme Court. If a Court with a new fifth conservative Justice takes one of these cases, it could decide that abortion is no longer a protected right, which would overturn Roe.

This incremental pullback may begin with sustaining some lower courts that are taking positions seemingly at odds with the Supreme Court’s 2016 decision in Whole Women’s Health v. Hellerstedt. Whole Women’s Health, for which Kennedy provided a fifth vote, curtailed the ability of states to limit access to abortion through ostensible health regulations that did not actually produce health benefits.

States are continuously passing new laws; for example, limiting access to medication abortion and dramatically limiting the window of time in which women can obtain abortions. If sustained, as might well happen, these restrictions will as a practical matter close off abortion access in many areas of the country.

I think that there is a strong possibility that the Supreme Court will gradually chip away at Roe and Casey by upholding various state restrictions that it might not uphold were Kennedy on the Court.

Specifically, the Court could easily use the undue burden test to start concluding there is no undue burden in cases where Kennedy might have viewed things differently. Over time, that would then enable the Court to approach the more fundamental question about whether there is a constitutional right to abortion at all, except perhaps in the rarest of cases.

Certainly the Iowa legislature has passed laws that could test the Court, if the Iowa litigation reaches the Court for a decision. Of course, there is restrictive legislation from other states as well that the Court could focus on.

About that Jeffrey Toobin prediction

(CNN legal analyst Jeffrey Toobin has posited that abortion will be illegal in 20 states within 18 months, in the wake of Kennedy’s retirement.)

Anthony Kennedy is retiring. Abortion will be illegal in twenty states in 18 months. #SCOTUS

I certainly think that it’s possible that abortion will be illegal in 20 states in 18 months. There are laws out there (like Iowa’s heartbeat ban at the sixth week of pregnancy) that could trigger an immediate challenge to Roe and a ruling undoing abortion rights. And we will likely see state legislators passing even more aggressive laws now that Kennedy is gone (like a complete abortion ban).

It sounds alarmist, but it might actually be a conservative estimate. A decision that the Constitution does not protect a right to an abortion means that the issue will be dealt with on a state-by-state basis, not that abortion will immediately become illegal across the US.

Since 1992, there have been literally hundreds of proposed and passed state laws intended to make getting an abortion increasingly difficult, if not wholly impossible. Many state legislators will eagerly offer bills to make abortion illegal in their states the second that Roe falls. We can expect people to actually act preemptively and pass laws that will go into effect when the newly constituted Court overturns Roe (no doubt with strong dissents from Ginsburg, Sotomayor, and Kagan).

As to Jeffrey Toobin’s prediction that abortion will be illegal in 20 states in 18 months, count me skeptical.

That would require that the newly appointed justice be quickly confirmed, that she or he be ready to vote to overturn Roe in an appropriate case, and that the four conservatives be ready to join in — a proposition by no means certain, particularly as to Justices Roberts, Gorsuch, and Alito. It would also require that the state vote to criminalize abortion, and the state supreme court would have to declare the prohibition constitutional on state constitutional grounds.

All eyes are on Chief Justice Roberts — and the Senate

I am not sure how Chief Justice Roberts would vote if the fundamental question of the constitutionality of abortion came before him given his strong concerns about stare decisis, his surprising decision not to overturn the individual mandate in the Affordable Care Act case (showing an institutional focus in my view), and related concerns over whether the Court would be perceived as purely political with a reversal of Roe. But clearly Roe is in danger.

Pro-choice advocates can hope for one of two things. They can first hope either Sen. Susan Collins or Sen. Lisa Murkowski are sufficiently concerned about overruling Roe that they either join with Democrats in delaying a vote until after the election or vote against a nominee who appears certain to overrule Roe when given the chance. Or, second, they can hope that Chief Justice Roberts meant what he said in his confirmation hearing about giving great weight to precedent.

(They can also, I suppose, hope that God hits one of the four conservative justices with a bolt of lightning sometime before the Court gets around to doing Roe in.)

It is highly unlikely that replacing Justice Kennedy will result in an overruling of Roe. None of the highly controversial “landmark” decisions of the Warren Court — not Brown, not Miranda, not Baker v. Carr — have been overruled despite the fact that Republican appointees have had a numerical majority on the Court for almost all of the past four and a half decades.

There are many reasons for this, but the main reason is that conservative jurists tend to equate the Court’s political standing — its prestige and legitimacy — with the rule of law itself.

To put it bluntly, they tend to care more about protecting the Court as an institution than about enforcing the Constitution itself. Anyone who doubts this should look at the overall records of the Burger, Rehnquist, and Roberts Courts or just re-read the Casey decision, where three Republican appointees authored a hysterically frightened opinion about the need to protect the Court’s prestige even if that means condemning as deeply illegitimate political pressures to overrule Roe v. Wade.

The Downton Abbey movie is all about the existential horrors of wealth
Coronavirus is not just a tragedy. It’s an opportunity to build a better world.
Taylor Swift ends her long countdown with her new single, “ME!”
Companies are quietly rolling back pandemic-related perks and benefits
The coming unemployment catastrophe, in one chart
Amy Comey Barrett, Trump’s Supreme Court nominee, has a years-long record of ruling against immigran...