Art Spiegelman, creator of Maus, calls out Marvel Comics for its “apolitical” politics 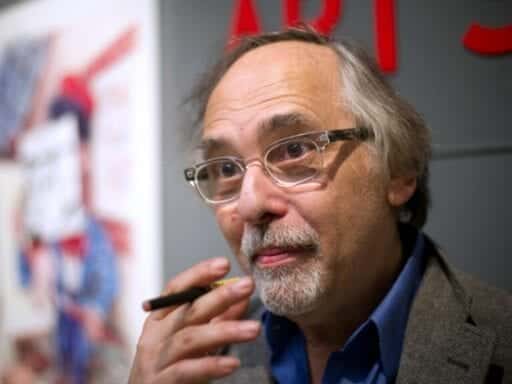 The Pulitzer-winning author says an editorial policy prevented him from calling Donald Trump an “Orange Skull.”

Marvel Comics is facing a backlash rife in irony, after what’s been described as an “apolitical” editorial policy resulted in a protest from a critically acclaimed writer.

Art Spiegelman, one of comics’ most well-regarded writers and artists, withdrew an essay from a Marvel compendium after editors resisted his comparison of President Donald Trump to a comics villain. Spiegelman is the author of the legendary graphic novel Maus, which movingly portrayed his father’s real-life experience as a Holocaust survivor. Maus is the first graphic novel to win a Pulitzer Prize and is widely considered one of the greatest books of its kind ever written.

In conjunction with this year’s 80th anniversary celebration of Marvel Comics, the Folio Society, a publisher known for putting out beautifully illustrated special editions of books, is releasing a detailed series of comics volumes from Marvel’s vaunted “Golden Age” — the decade between 1939 and 1949, when comic superheroes like Captain America and Superman became famed for fighting Nazis.

Spiegelman told the Guardian that Folio Society editors had invited him to write the introduction to the first book in the collection, perhaps because of the relevance of World War II to Spiegelman’s work. But he said they asked him to change one line in it, because it ran afoul of a Marvel Comics editorial policy of remaining apolitical.

The offending reference was a description of Trump as an “Orange Skull” — a comparison to Red Skull, the evil, explicitly fascist villain of World War II-era Captain America comics. Here’s the quote from Spiegelman’s essay in context:

Auschwitz and Hiroshima make more sense as dark comic book cataclysms than as events in our real world. In today’s all too real world, Captain America’s most nefarious villain, the Red Skull, is alive on screen and an Orange Skull haunts America. International fascism again looms large (how quickly we humans forget — study these golden age comics hard, boys and girls!) and the dislocations that have followed the global economic meltdown of 2008 helped bring us to a point where the planet itself seems likely to melt down.

Spiegelman added that after he submitted the essay, the Folio Society “regretfully” told him that the “Orange Skull” sentence was a dealbreaker:

I turned the essay in at the end of June, substantially the same as what appears here. A regretful Folio Society editor told me that Marvel Comics (evidently the co-publisher of the book) is trying to now stay “apolitical”, and is not allowing its publications to take a political stance. I was asked to alter or remove the sentence that refers to the Red Skull or the intro could not be published.

Rather than remove the reference, Spiegelman withdrew the entire essay from the collection and published it instead in the Guardian on Saturday, with additional context about the incident.

It’s unclear what Marvel Comics’ “apolitical” editorial policy is, exactly. From Spiegelman’s account, it appears that Marvel may have had a blanket policy with which editors at Folio were working. Spiegelman’s description gives no indication that Marvel editors ever saw the offensive phrase. What seems clear, however, is that Folio’s editors felt confident that they wouldn’t be able to publish the book with the Orange Skull line in it. (Marvel and the Folio Society did not respond to requests from the Guardian for comment; Vox has reached out to both publishers.)

Spiegelman’s reputation was built on his literary response to fascism; the idea that he should be prevented from identifying modern fascist threats today has predictably left people angry, for two main reasons. First, experts have repeatedly and urgently linked Trump’s politics to the modern rise of fascism, and though many point out that Trump himself is probably not a fascist, the comparison is common enough that Spiegelman didn’t feel the need to elaborate about who the “Orange Skull” was meant to be.

Second, Marvel’s apparent “apolitical” stance goes against the company’s history, both during the WWII era and much more recently. As Spiegelman richly details in the essay, Marvel’s Golden Age was created by teens who wanted to “fight for truth, justice and the values of President Roosevelt’s New Deal,” and who designed the first superheroes to fight against fascism and for social and racial equality in a society where they felt powerless to do so themselves:

It wasn’t just [Jerry] Siegel and Shuster, but a whole generation of recent immigrants and their children — those most vulnerable to the ravages of the great depression — who were especially attuned to the rise of virulent antisemitism in Germany. They created the American Übermenschen who fought for a nation that would at least nominally welcome “your tired, your poor, your huddled masses yearning to breathe free …”

In the wake of the 2016 election, comics superheroes like Captain America and Kamala Khan, a.k.a. Ms. Marvel, have come to play important roles in social protests. Many left-wing and progressive protesters have depicted their favorite superheroes as defenders of American values, while explicitly framing Trump as the face of the fascism America has historically stood against.

And for the past five years or so, Marvel Comics has been progressive and pushing diversity, in some cases publishing comics that have gone after Trump — including 2016’s Captain America: Steve Rogers No. 1, which saw the villain Red Skull using Trumpian rhetoric:

And as Geek.com detailed, unflattering references to Trump appeared in Marvel Comics stories on multiple occasions before he became president.

Given all this context, Spiegelman chose to withdraw his essay from the project completely rather than edit it as requested.

“I didn’t think of myself as especially political compared with some of my fellow travellers,” he wrote, “but when asked to kill a relatively anodyne reference to an Orange Skull I realised that perhaps it had been irresponsible to be playful about the dire existential threat we now live with, and I withdrew my introduction.”

Spiegelman ends his essay by noting that Ike Perlmutter, the current chair and former CEO of Marvel Entertainment — the branch of Marvel that oversees its comics, television, and animated properties — is a longtime Trump supporter. Though it’s unclear exactly how much direct control the famously idiosyncratic Perlmutter might have over Marvel’s editorial policies (especially given some of Marvel’s more progressive moves of late), public backlash has framed his connection to Trump as a threat to the Marvel legacy.

Telling Art Spiegelman of all people not to make Nazi analogies is https://t.co/kwmvaNb14J

You’ve probably seen tweets about Art Spiegelman and Marvel. Art wrote the 1st Pulitzer winning graphic novel, MAUS, chronicling his father’s experience as a holocaust survivor. He pulled a new work when Marvel asked him to remove a dig at Trump. Art knows what he is seeing. pic.twitter.com/cmbipJVWQb

Stan Lee, Steve Ditko, Jack Kirby, and the whole @Marvel Bullpen championed justice and equality from the start. Many of the talented creatives working there today continue to do so.

Whether or not Perlmutter’s connections to Trump have any bearing over the current editorial policies of Marvel Comics, Spiegelman’s essay is a timely reminder that, if nothing else, American comic books have always been inextricable from politics. Though it may not be as overt as Captain America punching Hitler, calling Trump the “Orange Skull” is entirely in line with the Marvel comics tradition.

Most ironic of all, it would have been a fitting testament to Marvel’s Golden Age.

Every season of American Horror Story so far, ranked
The #FallingStars challenge highlights extreme wealth — and extreme inequality
I Am Greta is an intimate, vulnerable documentary about the teen behind the headlines
Health experts call for the vice presidential debate to be canceled or made virtual
Laid-off workers are getting bad severance packages, and worse communication, from their employers
The racist history behind the 10 US Army facilities named after Confederate leaders