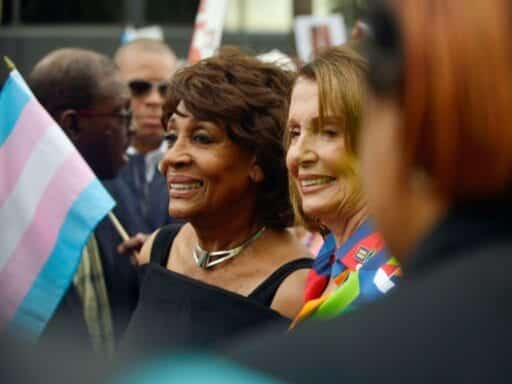 Rep. Maxine Waters (D-CA), a vocal Trump critic, is now at the center of a firestorm about civility that’s engulfed Republicans and Democrats alike.

At a Los Angeles rally this weekend, Waters urged attendees to keep “push[ing] back” against members of the Trump administration with whom they disagreed, apparently referring to attention-grabbing incidents in which administration officials were confronted by the public — most recently, the refusal of a Virginia restaurant owner to serve White House press secretary Sarah Sanders.

“You think we’re rallying now? You ain’t seen nothing yet,” Waters said at the event, according to a HuffPost report. “Already you have members of your Cabinet that are being booed out of restaurants … protesters taking up at their house saying ‘no peace, no sleep.’”

“If you see anybody from that Cabinet in a restaurant, in a department store, at a gasoline station, you get out and you create a crowd and you push back on them and you tell them they’re not welcome anymore, anywhere,” she added.

Her remarks came under fire from critics, who have called the House member’s remarks “dangerous.”

“The people who claim tolerance seem to be the most intolerant in this process,” House Majority Leader Kevin McCarthy said during a Fox News interview, adding, “We need civility in this country, but the idea that you’re asking people to go forward, that becomes very dangerous and it becomes a risk inside our country as well.”

In an MSNBC interview, Waters stood by her message. “I have no sympathy for these people that are in this administration who know it is wrong what they’re doing,” she said.

As Vox’s Emily Stewart reports, the so-called civility debate began to simmer last week after Trump administration officials were summarily forced out of different restaurants, a series of incidents that was capped off with the Virginia restaurant owner asking Sanders to leave her establishment on Friday.

Since then, there’s been a somewhat tortured discussion about the definition of civility and what it actually means in the age of Trump — a president who’s known for lobbing insults and belittling opponents at the drop of a hat.

As if on cue, Trump chimed in on the discussion on Monday afternoon and threw in an insult of Waters’s intelligence, while falsely suggesting that she was advocating for “harm” toward his supporters.

Pelosi has gone after Waters, too

It’s not just Republicans who seem uneasy about Waters’s calls to action, however. In a tweet Monday morning, House Minority Leader Nancy Pelosi appeared to criticize Waters as well.

“Trump’s daily lack of civility has provoked responses that are predictable but unacceptable,” Pelosi wrote. “As we go forward, we must conduct elections in a way that achieves unity from sea to shining sea.”

In the crucial months ahead, we must strive to make America beautiful again. Trump’s daily lack of civility has provoked responses that are predictable but unacceptable. As we go forward, we must conduct elections in a way that achieves unity from sea to shining sea. https://t.co/vlpqOBLK4R

Former Obama administration adviser David Axelrod also expressed his disagreement with Waters’s tactics and called on people to organize and volunteer to convey their discontent with the administration.

As part of the discussion about civility, some Democrats, including former Education Secretary Arne Duncan, have argued that driving people out of different businesses is a tactic that echoes historic segregation policies.

My personal opinion:
No matter how much we dislike or disagree with someone, we should not deny them the chance to have a meal.
The history in our country of denying people access to restaurants, to water fountains and even bathrooms is too raw, too real.
We can’t keep dividing.

In her remarks on Saturday, Waters appeared to suggest that this kind of activism is necessary to hold the administration accountable, especially in the wake of its gut-wrenching family separation policy.

“We want history to record that we stood up, that we pushed back, that we fought, and that we did not consider ourselves victims of this president,” Waters said during the rally this weekend.

Rock and roll icon Little Richard has died at 87
Vox Sentences: Trump throws census plans out the window
There’s a lot riding on Wednesday’s SpaceX launch
In Vivarium, Jesse Eisenberg and Imogen Poots get very stuck in suburbia
“This was a meeting to get information on an opponent”: Trump changes his story on Russia meeting
Images of police using violence against peaceful protesters are going viral