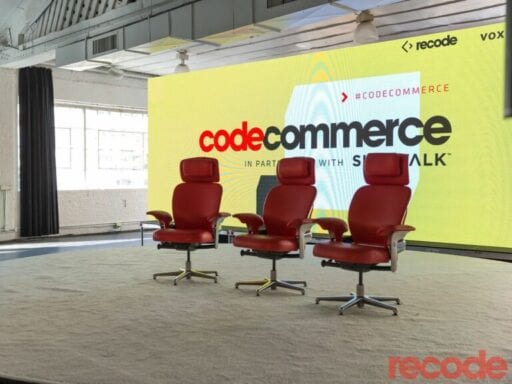 Leaders from Walmart, The RealReal, Birkenstock, Uber, and more join us next week.

That’s just the beginning of our jam-packed schedule. Scott Galloway, who co-hosts the Pivot podcast with Kara Swisher, will be back with his presentation on emerging trends in retail and e-commerce for 2020. (You can watch last year’s on YouTube.)

If you aren’t able to join us in person, here’s how to follow everything happening on the Code Commerce 2019 stage:

Every onstage interview will be available to stream on demand on Recode’s YouTube channel after each session. Take a minute to subscribe to our channel and get updates as highlights and full-interview videos are made available.

Get live updates and breaking news

Looking for a daily recap?

We’re packing in a ton of interviews, presentations, and a live podcast taping this year, plus all the up-to-the-minute coverage you know and love from Recode. Subscribe to the Recode Daily to get a daily digest of the biggest moments from the conference each morning.

Hear all of this year’s interviews

Recode’s Kara Swisher and Peter Kafka both host podcasts where they interview leaders in tech, media, retail, e-commerce, and everything in between. Subscribe to hear all their interviews from Code Commerce.

This year, Code Commerce host Jason Del Rey is taping the final episode of Land of the Giants, the new narrative podcast from Recode, onstage at Code Commerce. Subscribe to hear the final installment on the rise of Amazon and what’s next for retail and e-commerce. You can catch up on the series here.

America’s love for guns, in one chart
Is it a HIPAA violation for your employer to require vaccines?
House GOP delays their much-anticipated “compromise” immigration bill vote
Miscarriage comes out of the shadows
The Bold Type is a romantic comedy where the love interest is the job
Supreme Court decision on sales tax may yield states $20B windfall