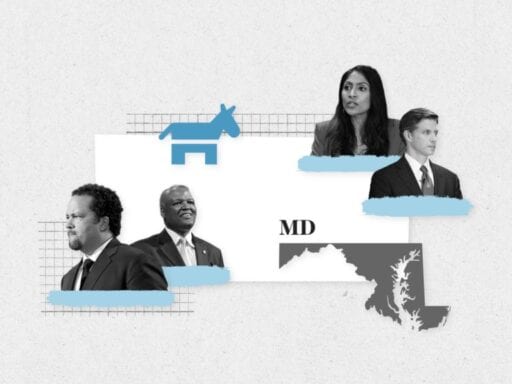 Democrats are duking it out for a shot at the governor’s mansion.

A broad swath of Democratic candidates is vying to take on popular Maryland Gov. Larry Hogan, setting up a fight between a more progressive wing of the party and the establishment. Democrats are also angling to flip the state’s solidly red First Congressional District.

The state’s polls close at 8 pm Eastern time. Live results are below, powered by Decision Desk.

A wide range of Democratic candidates including a former Michelle Obama staffer, a former Hillary Clinton adviser, and a Maryland state senator are going head to head for the chance to topple Hogan.

Former NAACP president Ben Jealous and Prince George’s County official Rushern Baker are the two frontrunners. Jealous — who is perceived as more progressive — and Baker — who is considered closer to the Democratic establishment — are seen as representing two very different approaches to the role.

Regardless of the candidate who comes out on top, Democrats are in for a tough fight this fall: Hogan’s high approval ratings will make him hard to beat.

Maryland First Congressional District: Democrats try to flip the state’s only red district in their quest for a “blue wave”

Four-term incumbent Andy Harris has comfortably sailed to reelection in previous cycles, but Democrats see his votes against the Affordable Care Act as potential ammunition that could be used against him.

A half-dozen Democrats are competing to go up against Harris. They include former Army intelligence officer Jesse Colvin, who has raised a sizeable war chest, small-business owner Allison Galbraith, and longtime Talbot County attorney Michael Pullen.

Despite the district’s firmly Republican leanings (Cook Political Report rates it as R+14), the DCCC named Harris’s seat as one of its targets earlier this year, hoping to promote another potential Democratic upset.

If Democrats are able to score a victory it would mark a major shift. The district, which contains all of Maryland’s Eastern Shore, voted for Trump by 29 percentage points in 2016. A Democratic win would also mean knocking off the state’s only Republican Congress member.

19 top ICE investigators ask DHS officials to split up the agency
Report: Pentagon goes on offensive in cyber warfare
It’s time to rethink air conditioning
Central American media focus on family separation crisis less acute than in U.S.
Dems are unified on immigration now. Will they still be when Trump is gone?
My nemesis, the piano