Michigan has a smart idea for fixing gerrymandering. Conservatives want to crush it. 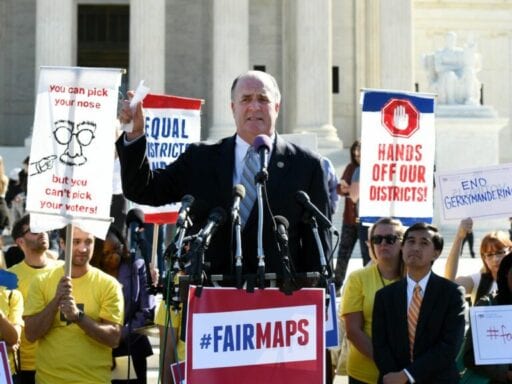 Reformers hoping to rein in partisan gerrymandering have a big idea that’s caught on in several states: handing the redistricting power over to an independent commission, rather than politicians in the legislature, as Michigan’s electorate voted to do last year.

But now, Michigan Republicans have filed a lawsuit to try and strike that commission down. And they’re using a longshot legal argument that could put similar bodies in other states at risk, too, with serious implications for the next round of state and congressional redistricting after the 2020 Census.

Back in June, the Supreme Court in Rucho v. Common Cause held that federal courts could not get involved in policing partisan gerrymandering under the United States Constitution because there were no “judicially manageable” standards to separate out permissible from impermissible consideration of political party in drawing district lines. So the Court upheld egregious gerrymanders helping Republicans in North Carolina and Democrats in Maryland. Reformers hoping the courts would block legislators from drawing overly partisan maps were despondent after the Rucho ruling.

After all, state legislators are not apt to redistrict themselves out of a job. But Chief Justice Roberts, writing for the Court, pointed to Congress, state supreme courts, and state redistricting commissions as potential other avenues for dealing with the problem of state legislatures drawing districts to benefit themselves and their party.

Congress is certainly not going to do anything about redistricting. And although earlier this week, a three-judge state court in North Carolina struck down North Carolina’s legislative gerrymandering under that state’s constitution, most other states with extreme gerrymanders haven’t been as lucky. It is hard to imagine the state Supreme Court in Wisconsin, for example, following North Carolina’s lead because of its majority of conservative justices.

So the best solution has seemed to be independent redistricting commissions, which typically put the power to redistrict into the hands of a diverse group of citizens who are political outsiders. Just last year, Michigan passed a voter initiative establishing just such a commission.

But now Republicans are trying to kill commissions too, with a bold legal argument that commissions are unconstitutional if they don’t give partisan actors a say.

They say in their complaint that the rule excluding political insiders from serving on the commission violates the First Amendment:

Their First Amendment argument may not succeed, but if it does, it could kill not just Michigan’s plan but other efforts at redistricting around the country.

Michigan’s new redistricting commission follows the lead of other states

Redistricting by commission is not a new idea. California and Arizona used it in the last decade’s round of redistricting and they are poised to use commissions again after the 2020 census. Both states created their commissions via voter initiative, which bypasses self-interested legislators.

Each state differs in its rules both for how commissioners are chosen and the threshold for approving maps. In Arizona, a state commission nominates 10 Democrats, 10 Republicans, and five unaffiliated voters. Political party leaders get to pick four members from that list of 25, and the four members then pick a fifth member, who cannot be from the political party of the other four members. California has a more convoluted process to create a 14-member commission with five Democrats, five Republicans, and four voters not affiliated with those parties. Both Arizona and California keep political insiders, such as political party officers, off the commissions.

The arguments conservatives put forth against the new Michigan commission

Arizona’s and California’s redistricting processes were not perfect, but they avoided creating extreme gerrymanders and they survived attempted litigation against them — including in one especially important ruling.

In that 2015 case, Arizona Independent Redistricting Commission, the Supreme Court divided 5-4 over whether statewide voter initiatives taking congressional redistricting power away from legislatures and giving them to independent commissions are even constitutional. Justice Anthony Kennedy joined the Court’s liberals case to uphold them. Chief Justice Roberts, for the four conservative justices, wrote one of his strongest dissents while on the Supreme Court. Now, Kennedy’s retirement and replacement by Justice Brett Kavanaugh would seem to place that majority holding at risk.

So gerrymandering watchers like me have been bracing for a new challenge from Michigan Republicans to the new voter initiative establishing commissions after the census releases new population figures. I expected commission opponents to argue for the Court to revisit the Arizona precedent, but so far it hasn’t happened.

Michigan Republicans filed suit, as expected, but they did not argue for Arizona’s reversal. Instead they made a First Amendment argument that Michigan’s commission structure discriminates against those with political party ties, and that this First Amendment burden on political association dooms the entire measure. The state Republican Party has filed a follow-on lawsuit raising a similar claim but not raising the Arizona case. It is a strange legal strategy.

To begin with, as Leah Litman has explained, the First Amendment argument is weak. The rules for serving on the commission preclude those who served in elected office or in political party organizations as a way of insuring that political insiders don’t once again control state redistricting. Michigan Republicans point to a line of Supreme Court cases barring state governments from using political affiliation in employment decisions. A new Democratic governor of a state cannot fire a janitor in the governor’s mansion for being a Republican.

But this rule against patronage hiring has a huge exception for those who are engaged in policymaking. The new Democratic Gov. Gretchen Whitmer can decide to hire a loyal Democrat as chief of staff; otherwise elected officials cannot ensure that they will have a staff who believes in and will carry out their mission. Similarly, excluding political insiders from serving on Michigan’s redistricting commission helps the commission do its work assuring cross-partisan cooperation.

Political operatives are much more likely to seek deadlock and push the issues to Michigan courts, where Republicans have a majority on the state Supreme Court. Indeed, conservative law professor and former 10th Circuit judge Michael McConnell recently filed a petition in the Supreme Court arguing that the patronage cases do not apply to judges because judges are policymakers. McConnell is trying to get the Court to reinstate a rule requiring partisan balance on Delaware’s elected courts. The same reasoning applies to Michigan’s commission; the commissioners are policymakers and the state can decide to achieve balance and exclude party insiders.

The Michigan Republican Party’s follow-on lawsuit is similarly weak. This case argues that because the Secretary of State is allowing voters to self-identify as Republicans, Democrats, or non-affiliates, this infringes on the constitutional rights of the state party to choose its members. While the Supreme Court has held that when a state has a nonpartisan primary it cannot label candidates on the ballot as the party’s nominees, that kind of First Amendment infringement is not at issue when it comes to the commission because none of the chosen commission members will be running for office. It is a random selection process that did not even need to include self-identified affiliation as one of the criteria for membership. And party leaders get to veto some randomly selected members of the commission anyway to avoid the problem of bias.

Republicans’ Hail Mary argument could do damage beyond Michigan

So why have Michigan Republicans raised two potentially weak arguments when there is a stronger one waiting in the wings? At this point, I have two tentative theories.

The Republicans are clearly hoping their Hail Mary strategy will kill commissions across the country. If the new First Amendment theory works in Michigan, it would be a way to bring down similar commissions elsewhere, including in Arizona and California, and for all redistricting (not just congressional redistricting). The Supreme Court has expanded the First Amendment in various ways to hurt progressive causes in recent years, and Michigan Republicans might be trying to go for broke.

But Republicans might also be looking for a way to win without putting Chief Justice Roberts in a tough spot. Roberts has desperately been trying to prove that all the justices do is call balls and strikes, and as part of that effort he’s going to be loath to overturn precedent.

When NPR Legal Affairs Correspondent Nina Totenberg asked Supreme Court Justice Ruth Bader Ginsburg recently why Roberts referred to commissions as a possible solution to partisan gerrymandering in Rucho given his Arizona dissent, Ginsburg answered: “As one lives, one learns. … So I think the Chief learned that he was wrong in Arizona.” Whether or not that’s true, asking Roberts to overturn precedent in a highly partisan case seems like risky business. After all, Roberts sided against Republicans and his fellow conservatives in the recent case about whether to add a citizenship question to the US census.

Whatever the reason for the unusual strategy, if these latest efforts fail, someone can still raise an Arizona argument against the Michigan commission before the next round of redistricting begins.

In the meantime, Michigan Republicans have gone big, trying to establish not only that partisan gerrymandering is permissible but that it is unconstitutional to keep partisan officials outside the redistricting process. It is a bold, daring argument that shows just how far the courts may go to protect partisan election processes and the Republican Party itself.

Richard L. Hasen is Chancellor’s Professor of Law and Political Science at UC Irvine School of Law and author of the forthcoming book, Election Meltdown: Dirty Tricks, Distrust, and the Threat to American Democracy.