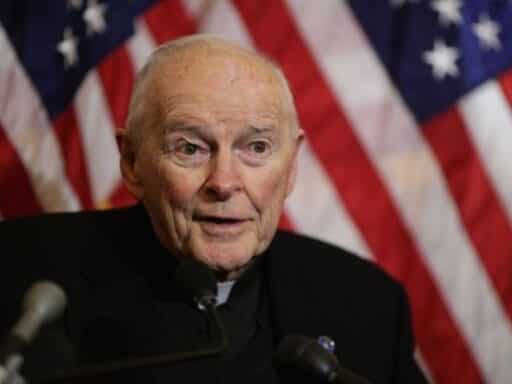 Last week, a Pennsylvania grand jury released a report detailing the extent of child sex abuse allegations by Catholic priests in six of the state’s eight dioceses. The report estimated more than 300 priests across the state abused at least 1,000 known victims, and it condemned the wider clerical culture that allowed senior priests to turn a blind eye to the abuses, often quietly shuffling offending priests into new dioceses, where they would have unfettered access to new victims.

The allegations pointed to a systemic culture of secrecy in the Catholic Church, and implicated a number of church officials — including Archbishop Donald Wuerl of Washington, DC — in the cover-up.

The Vatican has called the content of the allegations “criminal and morally reprehensible,” adding, “those acts were betrayals of trust that robbed survivors of their dignity and their faith. The church must learn hard lessons from its past, and there should be accountability for both abusers and those who permitted abuse to occur.” Pope Francis has also issued a striking personal apology, saying “we showed no care for the little ones.”

But one of the most pressing questions the release of the report has raised: Why now? This latest report comes 16 years after the initial wave of child sex abuse allegations rocked the Catholic Church in America. In 2002, the Boston Globe’s reporting into sex abuse, and its cover-up, in the Boston area kindled a wider reckoning within the Catholic Church in the US, and exposed both widespread abuse and systemic secrecy across the country.

New policy has since been established requiring clergy to turn over all reports of sexual abuse to police, and a report was commissioned on the extent of the abuse. And yet decades-old allegations are still coming out in 2018. So why are we still learning about how massive the system is that has kept this abuse a secret? The answer is complicated, and speaks as much as to the sheer scope of the crisis itself as it does to the change in culture that is allowing these cases to come to light.

Most of the allegations in the Pennsylvania report are decades old, predating the United States Conference of Catholic Bishops’ (USCCB) 2002 Charter for the Protection of Children and Young People, more commonly known as the Dallas Charter. Under this system of reforms, which followed the Globe’s reporting, the USCCB now mandates church leaders to report instances of abuse to law enforcement, rather than handle the abuse among leaders. With these reforms, the peak of allegations also predate a general cultural shift in the US Catholic Church.

Matt Haverstick, an attorney at Philadelphia-based Kleinbard LLC, which represents two of the dioceses named in the report — Harrisburg and Greensburg — told Vox that abuse cases have dropped precipitously since the 1970s and ’80s, and even more so since 2002.(The grand jury report data notes that the bulk of the cases listed happened before the 2000s.)

Additionally, he said, “the church is out of the investigative business.” Now law enforcement, and not internal church bureaucracies, investigates any allegations of abuse, he told Vox. “They pass these [cases] off to law enforcement and let law enforcement take the first crack at deciding what happened before the church will even touch it.”

David Gibson, the head of the Fordham University Center for Religion and Culture and a longtime writer on Catholic issues, concurred. The material, he said, is a vital “historical record” of a time of extensive abuse and corruption within the church, that is important to make public. But Gibson said it was important to note that the culture described in the report shouldn’t necessarily be conflated with the church’s policies or approach today, or indeed, of the past 18 years. “The grand jury report actually shows how the system has worked,” he said, referring to the Dallas charter and a wider cultural shift.

Cultural change is only part of the answer

Earlier this summer, then-Cardinal Theodore McCarrick experienced a public fall from grace after victims went on record with the New York Times about abuse they experienced as minors and as seminarians under his tutelage. While none of McCarrick’s accusers explicitly cited the #MeToo movement as impetus for their coming forward, a change in attitudes toward those who raise allegations of abuse has made speaking out less difficult.

Gibson says the timing of the McCarrick case and the Pennsylvania revelations has led to a new reckoning with the enormity and legacy of the Catholic sex abuse scandal.

“There’s a ‘perfect storm’ element to this whole thing,” he told Vox. “The Pennsylvania grand jury report was two years in the making and it happened to come out just as the reports about Cardinal McCarrick came out, which were totally unrelated. And it also comes out at a time when we have social media, which amplifies these things.” Gibson also cited the spread of allegations in other countries like Chile, where the entire group of Chilean bishops resigned over the handling — and alleged cover-up — of child sex abuse.

Gibson said discontent over Pope Francis’s leadership among conservative Catholics also has galvanized some to speak out more forcefully, despite conservatives traditionally being more protective of the church as an institution.

Massimo Faggioli, a professor of theology at Villanova University, argues that conservative Catholics are more vocal than usual in demanding accountability from church leaders because they see the crisis as a chance to push back on what they see as the influence of Vatican II, the formative 1962-’65 council that conservatives see as moving the church in a too “modern,” less orthodox direction. Some conservatives may be more willing to express discontent with church structure — and advocate for reform — than they might have been under a more conservative pope.

“Some see the opportunity to reform the Church from abuses as a counter-revolution … against the Church of Vatican II itself,” Faggioli told Vox in an email, “something that would not have been imaginable under … John Paul II.”

But the timing of the Pennsylvania report itself speaks less to a specific change in culture of believing abuse victims than it does the catastrophically slow turning of the cogs in the Catholic bureaucratic machine, and the sheer scope of the crisis.

The grand jury investigation involved the subpoenaing of a staggering half-million pages of reports from dioceses and churches over two years. Many of the priests implicated are retired or dead. And because dioceses operate relatively autonomously, a massive amount of legwork was needed to centralize and process that information.

The political will, and ability, do to that kind of legwork is relatively rare.

As Gibson pointed out, the very nature of the grand jury report is atypical. Only a few states have provisions for this kind of investigative work before any criminal charges are filed, of which Pennsylvania is one. In that state, the prosecutor’s office has the authority to commission grand jury investigations before filing charges, often in cases that involve widespread corruption or conspiracy (such as the Jerry Sandusky sex abuse case at Penn State, which was also investigated by grand jury).

And the political climate of recent years has made this kind of grand jury operation less of a risk for prosecutors. ”Twenty years ago, it would have been political suicide to investigate the Catholic Church [in Pennsylvania],” Gibson says. “Now it’s a political résumé builder to do an investigation like this.”

The church’s reluctance to publicize its own findings also played a part, Gibson said. Some of the named priests attempted to stop the release of the grand jury’s findings, which led to the report being partially redacted. Furthermore, only a minority of churches have preemptively listed the names of implicated clergy.

“The dioceses in Pennsylvania did not want to publicly list all of those who had allegations … there was no push by the church to do it,” Gibson said. In part, he said, this reluctance was due to the age of the allegations — most of the offenders were retired or dead, and nearly all were beyond the statute of limitations.

The lessons of the Pennsylvania report are manyfold. On the one hand, the report speaks to the sheer scope and scale of the crimes committed, and the difficulty — and necessity — of centralizing myriad accounts of abuse, even decades after the fact. It also reveals the relative reluctance of the church to make public its internal failings: While individual dioceses named priests using available church documents, the church as a whole has failed to do so.

Perhaps the greatest challenge ahead will be instituting a church culture that not only takes the accounts of victims seriously but also has protocols to deal with wider structural failings.

As James Martin, a Jesuit priest and Catholic commentator, told Vox: “The Dallas reforms are extremely stringent, and make it clear that any priest credibly accused of any sort of abuse is removed from ministry immediately. So there should be, at this point, no priest with any credible accusation against him in active ministry. But the missing link is how bishops who have covered up these crimes are treated.”

The Dallas reforms have no protocol for how to deal with those who looked the other way. Those implicated in cover-ups, such as Archbishop Donald Wuerl, remain in positions of clerical authority.

Ultimately, however, the greatest lesson of the Pennsylvania report is the importance of centralizing varied narratives of abuse, for the church to both take responsibility for its history and move forward. As Gibson puts it, “In many ways, this whole scandal demonstrates the power of storytelling and the importance of storytelling and giving shape and weight to all these accusations. It’s important to get the historical record out there, and the Catholic Church in the United States has not been good enough at doing that.”

The fight over Sesame Street’s Bert and Ernie as a gay couple, explained
A Utah meat plant is staying open even after 287 workers got coronavirus
Quintonio LeGrier was killed by police. A jury awarded his family $1 million. Then a judge took it a...
Former officer Jason Van Dyke sentenced to 6 years for Laquan McDonald shooting
Canada just banned military-style assault weapons after its deadliest mass shooting
The eternal adolescent voice of The Catcher in the Rye, in one passage