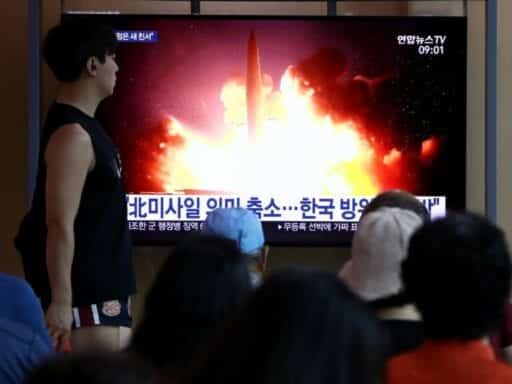 The president will likely shrug off this latest test like he has the other recent ones.

North Korea has just conducted its sixth missile test in more than three weeks, continuing to improve its military capabilities while receiving little to no resistance from the United States.

Reports indicate that the projectiles were fired off North Korea’s east coast. It’s too early to tell what kind of projectiles were launched, but the weapons are likely short-range ballistic missiles that Pyongyang has tested many times this year.

North Korean leader Kim Jong Un has made it clear why he’s continuing to conduct these tests: He’s angry at Seoul and Washington, which are in the middle of an annual joint military exercise that Pyongyang has long seen as threatening.

Kim’s displeasure is also likely exacerbated by the lack of progress in negotiations with the US over dismantling his country’s nuclear program.

The US and North Korea have been at an impasse for months over a core issue: Kim wants President Donald Trump to lift sanctions on his country before he gives up some of his weapons, and Trump wants Kim to give up nearly all of his weapons before he lifts the sanctions. As a result, the two sides remain locked in a stalemate.

Meanwhile, those sanctions have impeded South Korea from building closer political and economic ties with its neighbor. Put together, North Korea remains under financial strain with no prospects of reversing its fortunes anytime soon.

That’s why some experts I spoke to say North Korea has increased the pace of launches lately to signal that it’s unhappy. Trump, however, isn’t really listening.

The Trump administration’s response to the recent uptick in tests has been to brush it off.

Trump’s stance is that North Korea is more likely to dismantle its nuclear program as long as he and Kim remain friendly. That consideration seemingly outweighs almost anything else going on between the two countries.

Which is why Trump will likely shrug off this latest test, just as he has with all the others over the past two weeks. “I have no problem,” Trump told reporters outside the White House earlier this month after several recent tests. “These are short-range missiles.”

On one hand, it’s reasonable, and perhaps even prudent, for Trump and his administration not to overreact to Kim’s provocations. It’s better not to blow up any chance of diplomatic progress over a few missile tests, no matter how threatening they may be.

On the other hand, some experts say the administration could do much more than simply brush off the tests.

“Maybe they’re picking their battles to focus on resuming much-needed negotiations for a deal,” Duyeon Kim, a North Korea expert at the Center for a New American Security think tank in Washington, told me after Pyongyang’s first missile test three weeks ago.

“But if they continue to dismiss smaller missiles for long, they’re enabling Pyongyang to strengthen these dangerous weapons and telling South Korea and Americans living there that they don’t matter,” she added.

It looks like the Buffy revival will focus on a new Slayer
Vox Sentences: An impeachment week in the SCIF
Some Lady Gaga fans are trying to sabotage Venom at the box office. Sure.
Two public health crises have collided in the protests over George Floyd’s death
Why “the whole environment in Hollywood had to change” for Harriet to get made
Poll: Americans remain divided on Trump’s removal as the GOP prepares to acquit