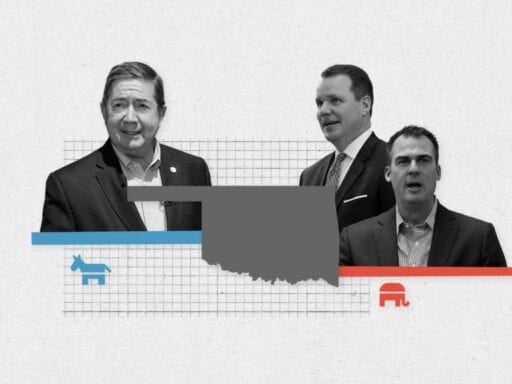 The candidates for the highly contested governor’s race will be picked in primary elections Tuesday in Oklahoma. Voters will also weigh a controversial ballot measure that addresses the legalization of medical marijuana.

The state’s polls close at 7 pm Central time. Live results are below, powered by Decision Desk.

Oklahoma governor’s race: Republicans run in the shadow of an unpopular term-limited incumbent

Current incumbent Gov. Mary Fallin is term-limited out and a crowded field of 10 Republicans is seeking to fill her open seat. Frontrunners include Lt. Gov. Todd Lamb, former Oklahoma City Mayor Mick Cornett, and Tulsa business executive Kevin Stitt. Lamb and Cornett have leaned into their government experience, while Stitt has sought to frame himself as an outsider who can bring a fresh perspective to the governor’s mansion.

The field is a bit less crowded on the Democratic side, with former Oklahoma Attorney General Drew Edmondson and former state Sen. Connie Johnson duking it out for the nomination. Edmondson, the scion of an Oklahoma political family, unsuccessfully ran for the job in 2010, but has held a steady lead this time around.

Given the state’s historically conservative leanings (Cook Political Report rates the governor’s race as solid Republican), the position is ultimately expected to stay red. Because there are so many candidates in the running, there’s a high chance the race will head to a runoff.

Oklahomans will consider a ballot measure that centers on the legalization of medical marijuana, a topic that’s spurred quite a bit of debate.

Oklahomans for Health, a nonprofit that pushed for this ballot measure, argues that it gives patients, including those who suffer from chronic pain, more choice about their medical care. Additionally, advocates for the policy suggest that the legalization of medical marijuana will enable the state to develop more concrete regulations around its use.

Critics of the measure including Americans for Equal Liberty claim it does not put enough limitations on the kinds of qualifying conditions individuals need to have to obtain medical marijuana licenses. Oklahoma Sen. James Lankford (R), an ordained pastor, has been among the religious leaders who have been very outspoken on the subject and questioned the measure’s morality, slamming it as a “recreational marijuana vote disguised as medical marijuana.”

“To have our communities more drug-addicted and distracted, that doesn’t help our families. It doesn’t make us more prosperous. It doesn’t make our schools more successful,” Lankford said. His argument is one that’s been used by many religious leaders, who say that the measure would simply be a slippery slope to the proliferation of recreational marijuana.

If voters decide in favor of legalizing medical marijuana, Oklahoma would become the 30th state to do so.

The harrowing new reality for Alzheimer’s patients
Trump’s danger on North Korea? Raised expectations
Beetles, drought, and fires are a ticking time bomb in the West
How America’s opioid epidemic could get even worse
The GOP voting bill that literally caused Texas Democrats to flee the state, explained
The John Travolta Gotti movie is waging a Trump-style war on critics