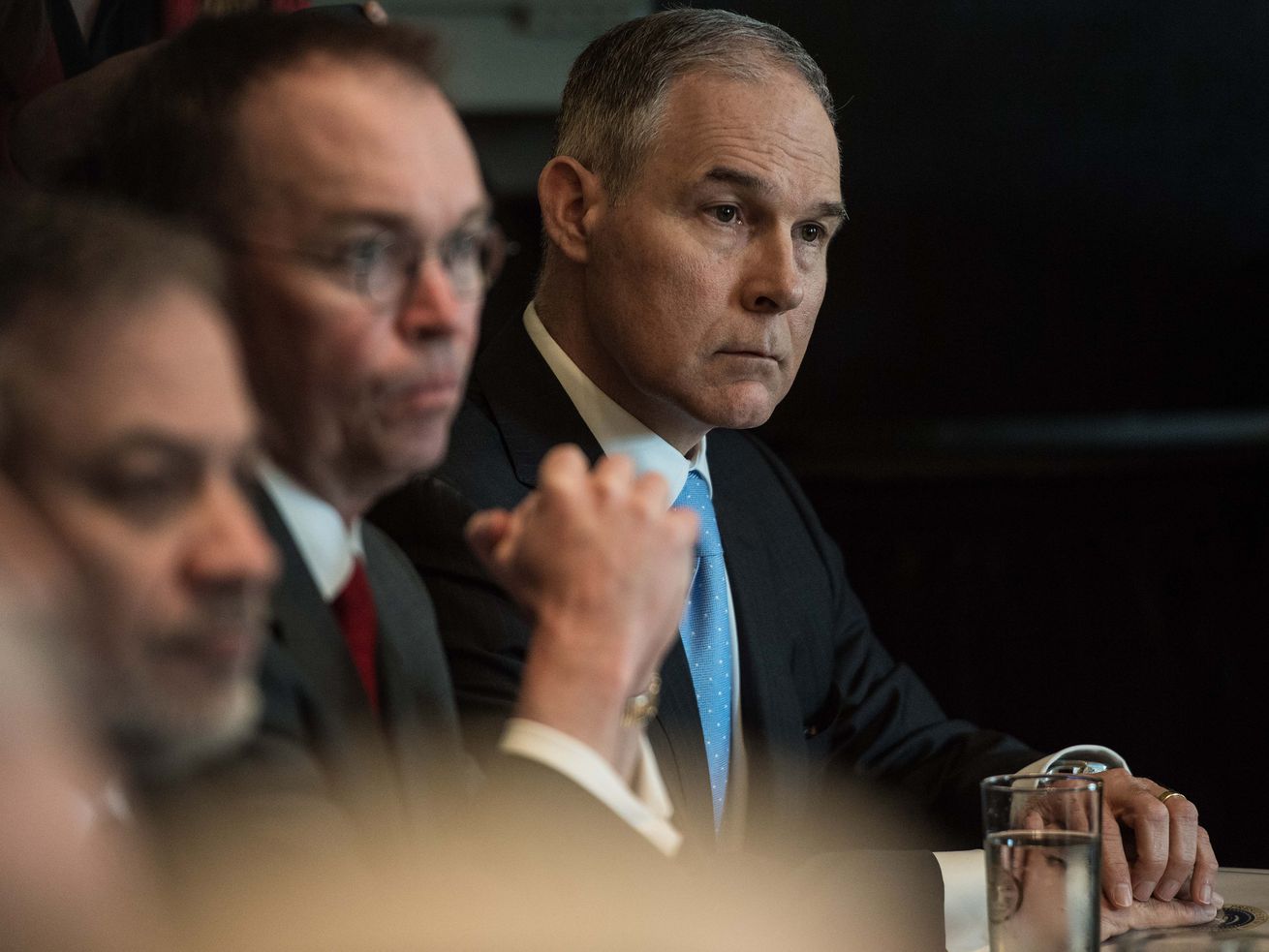 All of the investigations we know of, explained.

It’s become a weekly routine: New allegations of Environmental Protection Agency Administrator Scott Pruitt’s ethical lapses emerge. The media parses the details, like why the EPA spent an unprecedented $4.6 million on security for Pruitt, including $1,500 on “tactical pants.” Democrats call for Pruitt to resign. Republicans stroke their chins with “concern.” Pruitt blames the media and unwinds more EPA regulations. President Trump reaffirms his support for Pruitt, and the controversy gets shoved into the background. Repeat.

These alleged ethical lapses have triggered more than a dozen federal inquiries, audits, and investigations, and the scrutiny isn’t going away. Multiple institutions — including the Government Accountability Office, the EPA’s inspector general, the House Oversight Committee, and the White House — are investigating Pruitt’s indiscretions, including his first class luxury travel, a sweetheart housing deal with a lobbyist, and his use of a loophole to get raises for two close aides.

Politico reported over the weekend that yet another government watchdog, the US Office of Special Counsel, is now reviewing employee retaliation claims. At least six EPA staffers, some of whom have resigned, reported that they were forced out or sidelined when they objected to Pruitt’s security demands. (A spokesperson told Vox that OSC does not confirm or comment on any open investigations.)

The investigations will likely take months to complete, but they could change the balance of Pruitt’s standing in the White House as he struggles to keep his tally of deregulation at the EPA above his rising scandals. Pruitt has now set up a legal defense fund to cope with all of these inquiries, which could pose its own ethical quandaries.

Here is a list based on the best information we could gather on many of the investigations into his time in office:

The EPA’s in-house watchdog is on the case

The EPA’s Office of the Inspector General audits and investigates potential wrongdoing at the agency. Though it’s part of the EPA, Congress appropriates its budget separately to give it independence. The IG’s office confirmed to Vox that at least five audits related to Pruitt are underway.

An audit is a systematic assessment of how well an EPA office is doing its job, whereas an investigation is conducted in response to reports of wrongdoing and focus on an individual. The IG’s office does not confirm or deny the existence of ongoing investigations.

The five audits include:

Meanwhile, the IG has placed the following additional matters under review to see whether they merit an audit or an investigation:

The GAO is also scrutinizing the EPA

The GAO’s key responsibility is to keep track of how the government spends money, so it makes sense that the agency is very interested in what’s going on at the EPA. It concluded in April that the $43,000 soundproof phone booth Pruitt insisted upon for his office broke two laws that restrict how agencies can spend money.

In April, Sen. Tammy Duckworth (D-IL) sent a letter to the GAO asking it to look into Pruitt’s potential misuse of hiring authority. A spokesperson for GAO said it will not begin work on this request until it the EPA IG completes its review, but did confirm to Vox three audits are underway or completed:

Congress wants to know what’s up too

The House Oversight Committee is investigating Pruitt’s travels to Morocco and Italy, as well as his housing arrangements as part of one broad investigation. A spokesperson told Vox the Committee has already received 1,700 pages of documents.

The committee has already interviewed several EPA staffers, where it was revealed that Pruitt asked aides to perform personal tasks for him, including helping him find housing and asking the Trump International Hotel if he could buy a used mattress.

Meanwhile, four House Republicans have called on Pruitt to resign, while Iowa Sens. Joni Ernst and Chuck Grassley have publicly criticized some of Pruitt’s policies at the EPA with respect to changing ethanol fuel mandates. The administrator’s allies in the fossil fuel sector and among conservative groups are rallying the troops to keep him in office, scrambling to justify his massive security detail and to brush off audits as a political ploy.

By the time these audits yield tangible results (it could be months), some of the pressure on Pruitt is likely to have dissipated. But environmentalists are energized and some Democrats smell blood in the water, so they aren’t likely to let this go and will continue making more inquiries.

And come November, the balance of power may shift in Congress. So the White House will have to weigh whether Pruitt can still advance the ball for the Trump agenda against the questions about his ethics.

5 first-time protesters on why they showed up for Black lives now
House of the Dragon is the first Game of Thrones prequel that’s actually happening
Covid-19, explained by Carl (who has it)
Elizabeth Warren’s first question at an Iowa event: Why release your DNA results?
Amazon suspends police access to its facial recognition technology. But only for one year.
The Supreme Court case that could end Roe v. Wade, explained