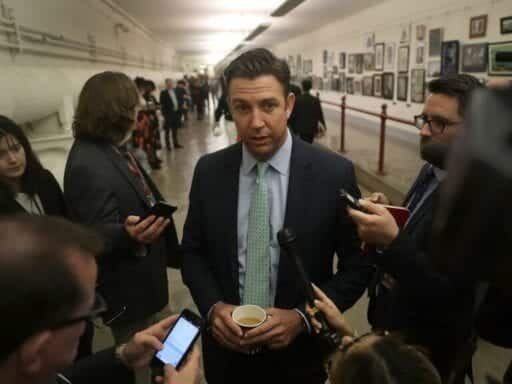 A damning indictment comes a few months from Election Day, and Rep. Hunter is on the ballot.

California Republican Rep. Duncan Hunter and his wife Margaret Hunter were indicted Tuesday, charged with using $250,000 in campaign funds on personal expenses, including a vacation to Italy, private school tuition, and dental work.

In addition to campaign finance violations, Hunter is also charged with wire fraud, and falsifying documents — allegations that are the result of a more than year-long Department of Justice investigation into the lawmaker’s finances. His arraignment is scheduled for Thursday in San Diego.

Hunter, an Iraq and Afghanistan war veteran who was first elected to Congress in 2008 to represent a traditionally conservative district covering most of San Diego County, has repeatedly claimed he is innocent. His lawyer called all inappropriate expenses “mistakes” that were “strictly inadvertent and unintentional” last year, and Hunter has repaid the campaign roughly $60,000.

But the damning indictment outlines a financially irresponsible family using campaign money to fund a luxurious lifestyle, including using $600 in campaign funds to fly a pet rabbit in the passenger’s cabin, big bar and restaurant tabs (including more than $400 for 30 tequila shots) in both Washington, DC, and San Diego, and expensive family vacations.

It all comes just months before a hugely important midterm election, in which Democrats hope to unseat more than 24 Republican lawmakers — and Hunter is one of them. Hunter will face Democrat Ammar Campa-Najjar, who worked in Obama’s Department of Labor, in the general election in November, and who has repeatedly out-fundraised him.

It was a risk that has been looming large over Hunter’s career for some time. Even his Republican colleagues were reportedly encouraging him to drop out. He didn’t, and now he faces serious charges just months before Election Day.

The FBI has been investigating the Hunters for more than a year, with a grand jury questioning former aides, lobbyists, and family members. On Tuesday, a 47-page indictment outlined a family that was spending beyond its means, and illegally using campaign funds to support an expensive lifestyle.

“Throughout the relevant period, the Hunters spent substantially more than they earned,” the indictment reads, citing more than 1,000 bank overdraft fees in a seven-year time span and the family repeatedly maxing out credit cards. At the center of the indictment is Hunter’s wife, who the lawmaker installed as his paid campaign manager, because the family “needed the extra money,” the indictment states.

The misuse of campaign funds extends to the purchase of video games; more than $25,000 in family vacation to Italy, Hawaii, Las Vegas, London, and other destinations; more than $15,000 in airline tickets for the family, friends, and the pet rabbit; food and alcohol; holiday gifts; and more.

According to the indictment, these purchases were often concealed to the campaign Treasurer as miscellaneous expenses or campaign activities; the treasurer repeatedly warned Hunter and his wife that campaign money could not be used for “a leisure outing at which the discussion occasionally focuses on the campaign.”

Hunter’s office has chalked up some of these expenses as mistakes, and the lawmaker has maintained his innocence, while acknowledging some misuse. According to a report in Politico from February, Hunter sold his home and moved his wife and kids to pay back some of the improper campaign fund uses. He, for the most part, lives in his Capitol Hill office.

The ongoing review of Hunter’s finances and repeated scandal have made a name for the San Diego lawmaker in Washington. He’s the son and grandson of two prominent Republican lawmakers; his father, Duncan L. Hunter, was a 2008 presidential candidate and former chair of the House Armed Services Committee.

The younger Hunter’s legacy, however, seems to have taken a very different turn. House Speaker Paul Ryan said in a statement that Hunter will be removed from his committee assignments until the case is resolved, calling the indictment “deeply serious.” And Democrats are hoping to end his congressional career all together this year.

Hunter has long been dogged by serious legal and ethics scandals. He’s been accused of having inappropriate relationships with women, drinking on the job, and other unprofessional conduct, all of which his office has denied. He’s also undergoing a House Ethics Committee investigation.

It’s made him one of Democrats’ prime targets in 2018.

But Democrats have been keeping close tabs on the growing ethical and legal scandals around Hunter and hope changing demographics in the district can turn the district blue. Democrat Ammar Campa-Najjar, who came in second in California’s top-two primary system and will be on the ballot in November is looking increasingly like a formidable challenge in the general election. Campa-Najjar has been out-fundraising Hunter, with more than $1 million in campaign donations. He has just over $200,000 in cash-on-hand. Hunter has over $350,000.

A former Obama’s aide, US Hispanic Chamber of Commerce and Department of Labor employee, Campa-Najjar — whose parents are Mexican and Middle Eastern — supports fixing Obamacare and working toward Medicare-for-all, passing a clean DREAM act and is part of a growing cohort of candidates who is not taking any corporate or PAC donations.

“Today’s indictment confirms just how deep this corruption can reach when someone like Duncan Hunter Jr. is in it for himself instead of representing the people,” the Democratic candidate said in a statement light of Hunter’s indictment.

In a year Democrats are trying to highlight corruption in a Republican-led government as a main campaign message, Hunter’s legal troubles might be enough for Democrats to bring the blue wave to a traditionally conservative Southern California district.

The Kyle Kashuv-Harvard controversy, explained
Kentucky AG to release the grand jury recording in Breonna Taylor case
US-North Korea nuclear talks are sputtering. South Korea is furious.
How NBA player Enes Kanter became a major enemy of Turkey’s president
Justin Trudeau faces backlash after another video is uncovered showing him in brownface
Why the US ambassador to Germany is now also the new acting head of US intelligence