The misery of the Hype House 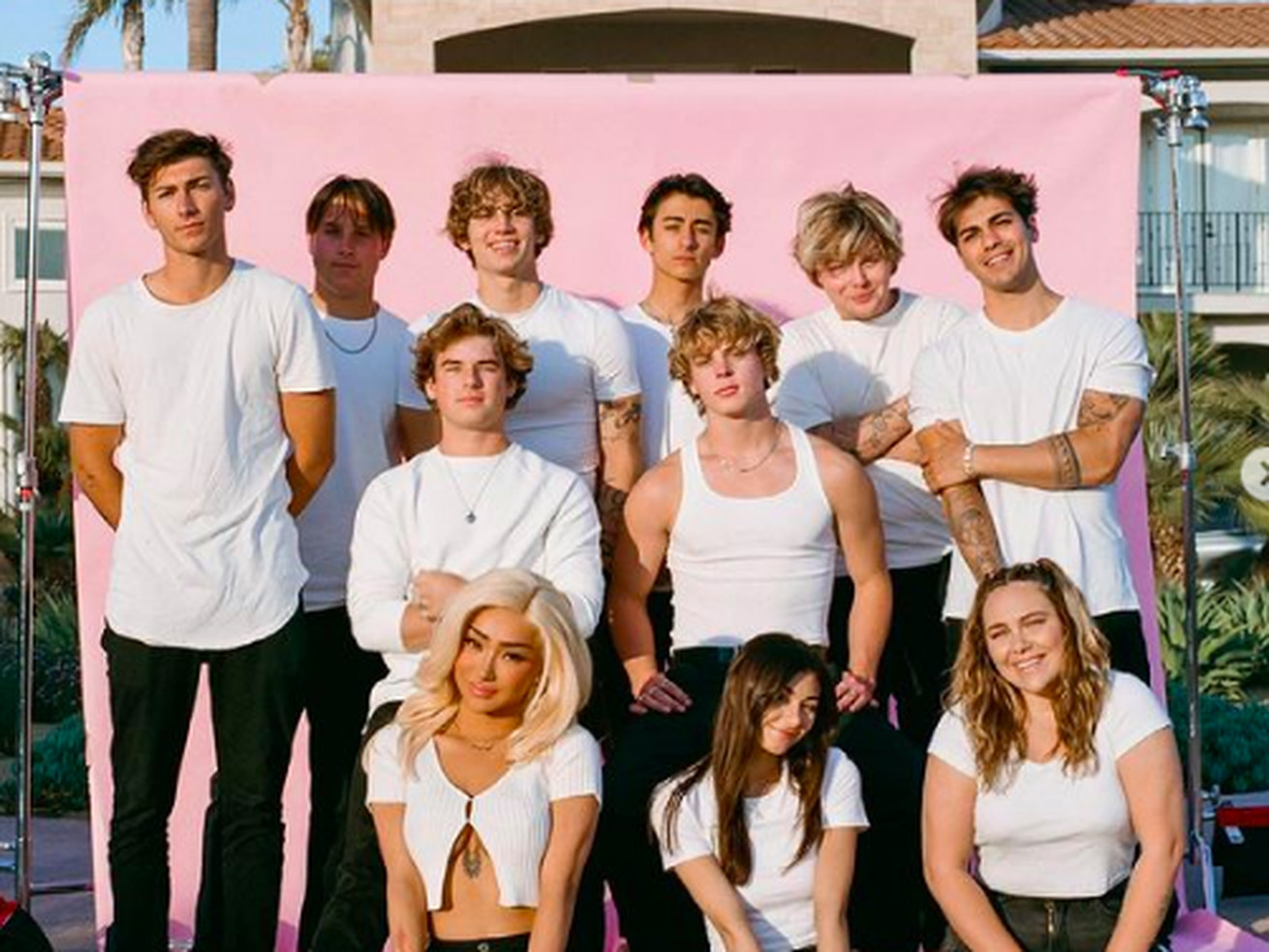 Netflix’s new Hype House series is a morbid tale of what happens when your 15 minutes of fame is up.

It’s in the third episode of Hype House, the Netflix docuseries released on January 7 about the TikTok content creator mansion of the same name, when it becomes painfully evident that nobody actually really wants to be there. Sure, most of them seem happy to live at the Hype House, currently headquartered in a $5 million home in Moorpark, California, which the collective pays for with sponsorship money from an energy drink brand and a TikTok competitor app. But it’s 2022, and being a member of the Hype House — which two years ago was composed of the Gen Z social media A-list — is now mostly an embarrassment.

To understand what’s going on in this bizarre, entirely-uneventful-but-also-sort-of-fascinating television show, it’s important to know why it exists in the first place. Almost exactly two years ago, a splashy feature in the New York Times introduced the arrival of the Hype House, a collective of mostly white, attractive teenagers who had recently become famous on an app that was only just beginning to be part of the national lexicon. It was part of a wave of Los Angeles social media mansions to pop up in the first half of 2020, all with the same purpose: to use each other’s clout to build more of it. TikTok, at that point, only had a handful of stars to break out beyond the app — the Hype House’s Charli D’Amelio, Addison Rae, and D’Amelio’s boyfriend Chase Hudson among them — but within the app itself, more and more teenagers started growing their audiences to hundreds of thousands, then millions, of followers. And when you get a taste of fame and decide you want more of it, you move to LA.

“My whole goal with this house in the first place was: Why can’t people who hit millions of other people be as famous as A-list celebrities?” says Thomas Petrou, the 22-year-old co-founder of the collective, in his first moment on screen. He’s the self-described “dad” of the group, and also the only one who seems to care about the fate of the Hype House at all. This, ultimately, is the overarching dramatic tension of the series: Petrou versus the handful of other members who are either too complacent or too focused on their own projects to film the content that makes the collective money. In fact, the only ambition they seem to share is having a Netflix show, and ironically, being in the Hype House is the only way to get one.

The problem here is that the Hype House has been hemorrhaging its most famous members since practically the beginning, and at this point (filming took place in early 2021) most of what’s left are the members who haven’t become famous enough to break out on their own. Those who live in the actual mansion include Alex Warren, a 20-year-old who says he spends between $50,000 to $70,000 a month on YouTube prank videos; his girlfriend Kouvr Annon, who absolutely hates being the butt of said pranks; Vinnie Hacker, an 18-year-old thirst trap TikToker who’s the buzziest of the bunch but also seems to have a pretty serious anger issue; and three other sweatshirted, floppy-haired white guys who fill the roles of “just happy to be included” despite never actually contributing.

Outside the house but still connected with the group, there’s 22-year-old Larray Merritt, a queer biracial creator whose fans revolted when he joined the Hype House because of its general straightness, whiteness, and cringiness, and Nikita Dragun, a trans woman and beauty creator who describes the Hype House as “a fucking mess.”

The most entertaining character we’re introduced to is Chase Hudson, the 19-year-old ur-TikTok e-boy who, after spending his high school years preening for his smartphone camera on earlier livestreaming and video apps, has since pivoted to pop-punk rocker. Hudson is the most compelling person on the show not because he has much in the way of interesting remarks, but because of his utter lack thereof. Throughout the series, Hudson’s character can only be described as a punk Ryan Lochte, showing up to his camera confessionals in indoor sunglasses and answering questions in barely audible grunts, while the rest of the Hype House gets annoyed at him for either not doing anything or being too full of himself.

We meet Hudson at his mansion in Encino, whose interior decor is mocked incessantly as “lowkey looking like a Cheesecake Factory” (it does). Here, he gives an emotional interview about his childhood in northern California, which he explains was difficult because “I had no one to collaborate with. I made videos by myself.” On his career trajectory, he says, “I started to grow my internet popularity through social media and TikTok and just hanging out and meeting people, I guess. And that’s where the love for meeting people and having that deep connection with your friends started, I guess.”

This is all to say that the only person I was actually rooting for besides the producers — who have clearly taken great pains to craft a narrative from the footage they were given — was Annon, who is increasingly fed up with her role as YouTuber girlfriend. Throughout the series she acts as the unwilling target of Warren’s pranks, which often include fake-proposing to her (she desperately wants to be engaged), in an effort to improve Warren’s dwindling viewership. In one episode she begrudgingly agrees to get “fake married” despite how painful and confusing it is for her; we later find out the wedding video didn’t even get that many views. All the while, Annon comforts Warren as he copes with his childhood traumas (unlike Hudson, Warren is working through the death of one parent and the abuse of another) and his crippling fear of failure, which to him means a life in which he’s not a full-time content creator.

It’s all very odd, considering how the show portrays being social media famous as an absolutely terrible way to live. “If y’all don’t notice,” says Petrou, “like, 90 percent of the most popular social media people don’t want to be social media people.” In an effort to rehabilitate the relationships among the loose network of former and current Hype House members, most of whom don’t live at the Hype House, Petrou takes them all on a trip to Joshua Tree, then complains that none of them are filming anything. “Why am I doing this?” he asks after the first evening ends in several passive-aggressive fights where it’s extremely clear that no one actually cares about the Hype House and the only reason they’re here is because Netflix cameras are there.

This was always the plan. From the very beginning, every single TikTok house member aspired to have their own reality show. Most TikTokers don’t pull in enough money to cover rent at a Los Angeles mansion, even when they’ve banded together as a group. They need to set their sights on something bigger: something like Keeping Up with the Kardashians, a show about people largely considered to “have no talent” but who are watchable nonetheless, and which can serve as a springboard for its stars to become household names and entrepreneurs. Influencer management companies were willing to front some of the cost of a house in the hopes that the brand would become more than just the sum of its members, perhaps turning into an incubator for up-and-coming social media darlings. Petrou, for instance, compares the Hype House to “a Nickelodeon or a Disney.” But reality shows take time, money, and access to produce, and time moves a lot faster in the influencer world. Most content houses don’t even stick around long enough for a deal to get signed, never mind actually film a season.

By the sixth episode, Petrou has decided it’s time that the Hype House go the way of every other TikToker content mansion and announces he wants to shut it down. He’s lonely and depressed and sick of putting energy into a business nobody else, in or outside of it, cares about. It’s the only sensible decision anyone has made so far on this show, but of course, by the finale he decides that actually, the Hype House is “family” and worth saving. Cut to six months later: Warren, Annon, and several others have moved out, and Petrou is thinking about moving more people in, at which point it’s difficult not to scream at the television and ask why this man is hell-bent on making himself as miserable as possible.

“Every good thing comes to an end,” remarks Larray Merritt — who, like Nikita Dragun, was always too famous to truly be part of the house — then asks, “But was it a good thing?”

Probably not! The Hype House has made its members more famous and rich, and also more depressed and anxious; it has taught them to value the shallowest things and has given them the facsimile of community in a deeply lonely industry, or, as Petrou describes it, “I feel like a kid who has all the toys in the world but no batteries to operate them.” Consider the Hype House’s most recent content on its TikTok account, all of which is either sponsorships for the energy drink that pays its bills or promo for the Netflix show, where they constantly complain about having to make sponsorship videos for said energy drink. The dream of a group of friends getting rich by having fun and making content has already died: Few of them are friends; none are having fun.

Hype House is a show about people who got famous filming themselves and whose ultimate goal is to become famous enough for someone else to hold the camera. Though they have, thanks to Netflix, achieved that goal, the series fails to show any real meaning to their whole performance, and instead shows how hollow it really is, bereft of joy or value. I could imagine Walter Benjamin finding Hype House extraordinarily fascinating, though, and I firmly believe it should be studied alongside Adorno and Horkheimer in every Media Studies 101 course.

It is a show about the precarity of the modern fame apparatus, the crushing churn of “content creation” as a profession, and the toll of too much attention on the human psyche. Lots of art attempts to claim that being rich and famous actually sucks, but only Hype House succeeds in making it seem so cheap and so sleazy, the creative equivalent of a crypto scam. If there’s a single takeaway from this show, it’s that the Hype House — and perhaps content houses altogether — must die.

This column was first published in The Goods newsletter. Sign up here so you don’t miss the next one, plus get newsletter exclusives.

Omicron is exploding. Here’s what to do if you’re exposed.