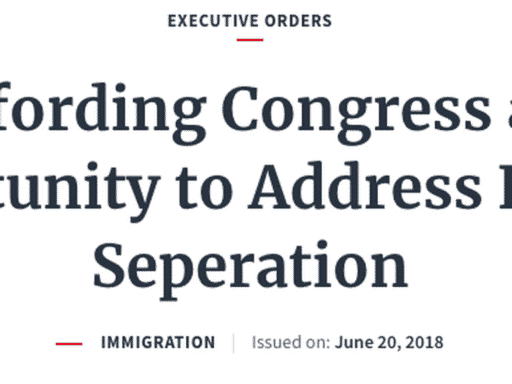 The Trump administration released its highly anticipated executive order on family separation Wednesday afternoon. And in the grand tradition of many Trump White House documents, something wasn’t quite right.

See if you can spot it:

While the misspelling was quickly fixed, the latest example of the Trump administration’s ongoing struggles in that domain (see: the Department of Education Snapchat) left the impression that the executive order had been prepared hastily.

The White House’s executive order addresses the administration’s controversial “zero tolerance” policy that criminally prosecutes all adults entering the United States illegally. As part of this policy, adults were held in federal jail while awaiting trial and their children were put in federal custody, forcing family separations.

The executive order aims to hold families together in immigrant detention as their cases are being processed. Parents will still be prosecuted, but they will be able to remain with their children in custody of the Department of Homeland Security.

“It is also the policy of this Administration to maintain family unity, including by detaining alien families together where appropriate and consistent with law and available resources,” the order reads. “It is unfortunate that Congress’s failure to act and court orders have put the Administration in the position of separating alien families to effectively enforce the law.”

What Mulan taught me about identity, honor, and drag saving China
How the Nevada Democratic caucuses will work
Amazon’s surveillance cameras fly now — which is terrifying
Study: most wealthy countries aren’t religious. Then there’s the US.
Bernie Sanders’s campaign is over, but his legacy is winning
The toilet paper shortage is more complicated than you think