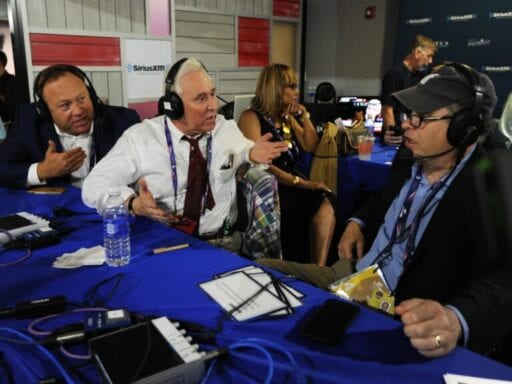 And Alex Jones’s seven-day Twitter ban seems to be why.

President Donald Trump, who has publicly discussed an interest in overhauling libel laws and derailed the press as the “enemy of the people,” has taken a sudden interest in freedom of speech on Twitter and other social media.

In a series of tweets on Saturday morning, Trump accused social platforms of “totally discriminating” against conservative voices and called censorship a “very dangerous thing.” He appeared to be reacting to Twitter’s one-week ban of far-right conspiracist Alex Jones, though he did not mention him by name.

Social media platforms are “closing down the opinions of many people on the RIGHT” while doing “nothing to others,” Trump tweeted. He said that while he is often incensed by the “Fake News” put out by CNN and MSNBC, he hasn’t “asked that their sick behavior be removed” and instead watches it “with a grain of salt, or don’t watch at all.” (Though as the Boston Globe points out, after months of his attacks on the press, more than a quarter of Americans now say that “the president should have the authority to close news outlets engaged in bad behavior.’”)

“Let everybody participate, good & bad, and we will all just have to figure it out!” Trump wrote.

Social Media is totally discriminating against Republican/Conservative voices. Speaking loudly and clearly for the Trump Administration, we won’t let that happen. They are closing down the opinions of many people on the RIGHT, while at the same time doing nothing to others…….

…..Censorship is a very dangerous thing & absolutely impossible to police. If you are weeding out Fake News, there is nothing so Fake as CNN & MSNBC, & yet I do not ask that their sick behavior be removed. I get used to it and watch with a grain of salt, or don’t watch at all..

….Too many voices are being destroyed, some good & some bad, and that cannot be allowed to happen. Who is making the choices, because I can already tell you that too many mistakes are being made. Let everybody participate, good & bad, and we will all just have to figure it out!

This isn’t the first time Trump has picked up on the right’s contention that there is some grand conspiracy to silence Republican voices online, and it also exemplifies the difficulties companies such as Twitter and Facebook could face in their attempts to clean up their communities.

Just a few weeks ago, Trump seized on the narrative that Twitter was “shadow banning” conservatives after Vice News’ Alex Thompson reported that some Republican officials weren’t showing up in automatic search results. The accounts being suppressed were also ones that Twitter’s algorithm had determined were taking part in unhealthy and abusive behavior.

Twitter “SHADOW BANNING” prominent Republicans. Not good. We will look into this discriminatory and illegal practice at once! Many complaints.

There’s a lot to unpack in Trump’s Saturday tweet storm.

Most immediately, Trump’s outburst appears to be a reaction to the recent clampdown on Jones and his Infowars network. Jones is a far-right conspiracy theorist who helped popularize the false beliefs that the 2012 Sandy Hook Elementary School was made-up and that the US government staged the 9/11 terrorist attacks. Recently, he claimed that Democrats had planned a second Civil War for July Fourth.

Multiple platforms have banned Jones and Infowars in recent weeks, including Apple, Facebook, YouTube, and Spotify. Twitter, which has been under increasing pressure to take action, this week said it would ban Jones and Infowars for seven days for violating its policies.

In July, Trump celebrated reports that Twitter was cleaning up its site and getting rid of fake accounts — while not missing a chance to suggest the company delete the accounts of the New York Times and the Washington Post.

But in seemingly equating Jones with traditional media outlets like CNN and MSNBC, Trump’s now making the argument that everyone should be able to participate in the online discussion. In his tweets, the president seems to be defending Jones, on whose radio show he has appeared in the past, and making the case that he’s just another voice on the right — not a dangerous, corrosive conspiracy theorist whose own lawyers have said much of his act is just for show.

And with his assertion that “we won’t let that happen,” Trump seems to be suggesting that his administration will stop Twitter and other social media companies from policing their platforms. It’s not clear whether he has such authority, if any, in that arena.

The term “fake news” used to actually mean something

“Fake news,” you might recall, initially meant just that: content disguised as news stories that is completely false and misleading, written by unknown people looking for clicks and, therefore, ad revenue. During the 2016 campaign, it was stuff like fake articles posted on Facebook saying that Pope Francis had endorsed Donald Trump or the Pizzagate conspiracy that Hillary Clinton was running a child sex ring out of a Washington, DC eatery. (Jones promoted Pizzagate and later apologized for it.) That’s the type of content social media companies are trying to crack down on by cleaning out fake accounts and banning users like Jones who violate their terms of service.

But Trump and many in his orbit have coopted the term “fake news” to simply mean content they don’t agree with or like. Trump often decries the “fake news” on Twitter and at rallies, falsely claiming that major news outlets simply make stories up whenever a report comes out he doesn’t like.

That’s led to where he is now, equating Jones, who often fabricates stories and spreads conspiracies, with major journalistic networks CNN and MSNBC.

At the same time, Trump has also seized on the conservative narrative that their voices are being suppressed and silenced on social media. That can be traced back, in part, to a 2016 Gizmodo story citing a former Facebook journalist who said workers there routinely suppressed news stories of interest to conservative readers.

Since then, Republicans and Silicon Valley have engaged in a back-and-forth where conservatives accuse platforms of bias and companies bend over backwards to show that’s not the case. After the Gizmodo story broke, Facebook CEO Mark Zuckerberg met with conservative leaders to discuss how the network handles conservative content.

This year, congressional hearings convened to look at how Twitter, Facebook, and other platforms handle privacy and how Russia used them to interfere with the election have also been peppered with Republican lawmakers accusing company executives of bias. Diamond and Silk, a pair of black Trump supporters who have found internet fame, wound up before the House Judiciary Committee in April after accusing Facebook of censoring them. An exasperated Rep. Ted Lieu (D-CA) called the hearing “stupid and ridiculous” partway through.

Social media companies are trying to clean up their platforms

Twitter has been wiping millions of fake accounts and followers from its platform in an effort to combat bot factories and made-up accounts. It says it’s trying to prioritize “health initiatives” to improve the quality of its product overall.

In cracking down on bad behavior, Facebook and Twitter risk backlash from Wall Street. (After reporting earnings in July showing minimal efforts to clean up their platforms, the stock prices of both companies tanked.) They also face potential anger from users and, as is increasingly evident, politicians.

There’s little evidence to suggest that Twitter, Facebook, and other platforms are actually engaging in some systematic war on conservatives. Yes, some are taking aim at abusive and corrosive behavior online, but that’s presumably a nonpartisan issue. Moreover, Twitter and Facebook are private companies, so the First Amendment — which protects speech from government restriction — doesn’t apply. They can ban behavior they determine violates their terms of service or policies, which is what appears to have happened with Jones.

That Trump and other conservatives seem so eager to jump on the tech-is-biased-against-us bandwagon should be concerning, especially ahead of the 2018 elections. If, say, Democrats take back the House of Representatives in November, it sets up a scenario where Republicans may say online bias is partly to blame. That turns social media into a political football — if Russian disinformation on Facebook and Twitter swayed voters against Democrats in 2016, who’s to stop Republicans from saying bias hurt them in 2018?

The House is voting on immigration today. No one seems to know what’s going on.
White House calling for more beds at detention centers
The Democratic Party is moving steadily leftward. So why does the left still distrust it?
17-year-old Antwon Rose was fleeing and unarmed when police shot him
At the U.N., Trump showed his total unfitness for U.S. presidency
Will GOP immigration bill stop family separations at border? Critics say no