10 weddings a day: What it’s like to run a wedding chapel in Las Vegas 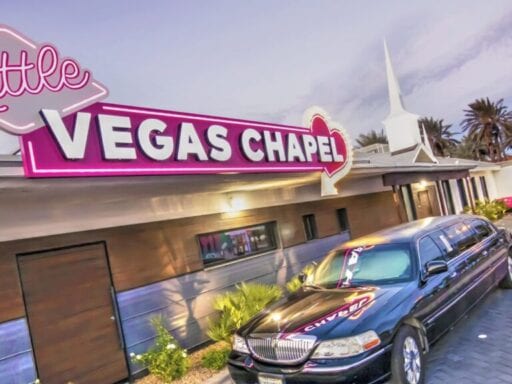 From drive-through ceremonies officiated by Elvis to couples a little too tipsy to make the biggest decision of their lives, the owner of Little Vegas Chapel has seen it all.

Part of the Romance Issue of The Highlight, our home for ambitious stories that explain our world.

Sin City has long been synonymous with shotgun weddings, elopements, and other last-minute nuptials. And for good reason — wedding tourism generates an estimated $2.5 billion for the Las Vegas economy: Tens of thousands of couples emerge from the gambling capital hitched every year, with a peak of 128,000 knots tied in 2004, when one in 20 weddings in the nation took place in the area.

So, in a world where the average American couple spends a 15-month engagement planning a $28,000 wedding, what does it take to want to get married in Las Vegas?

It largely comes down to speed and efficiency. In one of the dozens of famous wedding chapels found all across the Boulevard, a couple can get married for as little as $100 in as short as 15 minutes. Las Vegas weddings are also novel and, more often than not, steeped in kitschy Americana. There’s the classic Elvis impersonator officiant — and indeed several chapels completely devoted to the King of Rock — but there’s also a cannabis-themed chapel, a Denny’s chapel, a mini-golf chapel themed around the band KISS, and a gun store and shooting range that does a literal shotgun wedding.

That means that the people who work in these chapels, like Michael Kelly, owner of the Little Vegas Chapel, are used to a funkier side of the wedding industry than we’re used to seeing on our Pinterest feeds. Born and raised in Sin City, Kelly, 34, has seen everything from insurance-motivated weddings to the man who married his cellphone. Through it all, he remains judgement-free. Most of the couples who come through his chapel’s doors are entirely aware that a Vegas wedding will be … unusual. “It’s just that — the fact that it’s exciting,” he says. “They’re on vacation, it’s unique and fun, it’s stress-free. At the same time, it’s still touching and emotional. That’s why I think people come here.”

Vox asked Kelly to take us deep into the day-to-day of a Vegas wedding chapel that, pre-coronavirus, performed an average of 10 ceremonies a day. (Yes, there are a lot of officiants who double as Elvis impersonators. No, it’s not like The Hangover; it’s pretty much impossible to black out and wake up with a stranger for a spouse.) Here’s what he told Vox, edited for concision and clarity.

What’s exciting about a Vegas wedding? What’s the appeal for couples?

You get a vacation, a honeymoon, and you can get married and it won’t kill you. It’s a lot less expensive doing it with us.

[Our clientele] is probably 90 percent out-of-town, 10 percent locals. We get a lot of international folks. We get people from Australia, the U.K. We’ve had people from South Africa, from Europe. We get couples from Brazil, Argentina, Colombia, Chile.

A stereotype of Vegas weddings is that they’re impulsive, spur-of-the-moment decisions. Do you find that to be the case?

We do see [walk-ups]. It doesn’t happen too often, but it happens enough that we’re ready to go if someone walks in with a marriage license.

Do you see couples that need to marry for legal reasons?

A lot of times they don’t really tell us the reason why, but sometimes they’ll say for insurance. Something pretty banal like that.

The marriage license bureau, where couples file for and obtain state authority to marry in Nevada, is open until midnight seven days a week in Las Vegas. Why is the bureau open so late?

People fly in at all different hours of the day. If they land at 11 o’clock, they can still make it down to the [bureau]. They’re taking people up until 11:55 pm, and it’s a quick process. Couples fill out a pre-application online, then they’ll get a confirmation number. All they have to do is take that confirmation number to the office and they’ll print out the license. Of course you’ve got to double-check all your information, but they [can] have it ready for you in minutes.

In 2016, a California man married his cellphone at your chapel. What’s the story there, and what are some other memorable unions you’ve seen?

He was trying a social experiment. He was thinking, our cellphones are with us when we wake up, they’re the last things we check before we go to bed. They’re always in our pockets. So he said, why not just get married to my cellphone because I’m with it so much?

He [called and] explained it to us beforehand. And we said, “Yeah, that kind of makes sense. We’ll give it a shot.” It was a full ceremony. He walked down the aisle, and I think we had the cell phone up on a unity candle stand. There was a ring attached to the back of the phone holder, so he stuck the phone on his wedding ring finger, and that’s how that “unity” was formed. He was pronounced “man and cellphone.”

We once had a groom who served in the military — retired military. He’d been with his service dog for a really long time, and he wanted to marry his dog. So we did it. It was really cute and really touching. You could just tell he loved his dog. It was symbolic, but he took it very seriously.

In a legal wedding, [both parties] have to say “I do,” it has to be done in front of a witness, and the officiant has to be ordained. With a commitment ceremony [like these], they don’t have a marriage license so it’s not binding. We have them understand and acknowledge that they’re not doing a legal wedding, and we don’t pronounce them husband or wife or partners for life. We pronounce them as a committed couple for life. There is nothing legally binding.

I also see couples that were high school sweethearts. They’ve been apart for 10, 20 years, then they find each other online. They’ve lived their separate lives, then reunite and get married. We do a few of those every month; they’re always really touching.

How has coronavirus affected business?

The marriage license bureau closed at the end of March, and opened up again at the end of April. Because of that, none of the chapels were really open. But after they opened up, we’ve seen a lot of folks come in from out of state because they had a wedding back home they had to cancel, and they wanted to do something to honor their original date.

Before [coronavirus], we were open seven days a week from 9 am to 10 pm every day; until midnight on the weekends. I’d say about 10 weddings would’ve been an average day. We’re slowly starting to get back up there, but there’s been some days where we’ve had nothing.

Right now only 10 per group can enter the chapel. We have masks available for everyone, but during the service, the couple has to be able to kiss each other.

On TV and movies, a couple often gets drunk, gets married, and wakes up the next morning without remembering what happened. How probable is that scenario in real life?

Getting your license is a very deliberate process, and you can’t really do it while inebriated. They have to go to the marriage license bureau, and that’s a sobering thing. You’re in a city building. You have to fill out paperwork, you have to pay some fees, you have to sign more paperwork. Then you have to come to us. The minister will check to see if you are inebriated; we don’t perform services for couples that have been drinking. If you are, we’ll say you have to come back later, or we can’t do this.

And they usually do! Couples are pretty committed at that point.

Donna Strickland had no Wikipedia page before her Nobel. Her male collaborator did.
Why schools refuse to treat Little Women as a great American novel
A lack of insurance is leading more Americans to have weight loss surgery in Mexico
The multibillion-dollar business of sheltering migrant children, explained
Gubernatorial candidate's political ad focuses on motherhood
The Tennessee GOP primaries will be determined by one question: Who loves Trump the most?