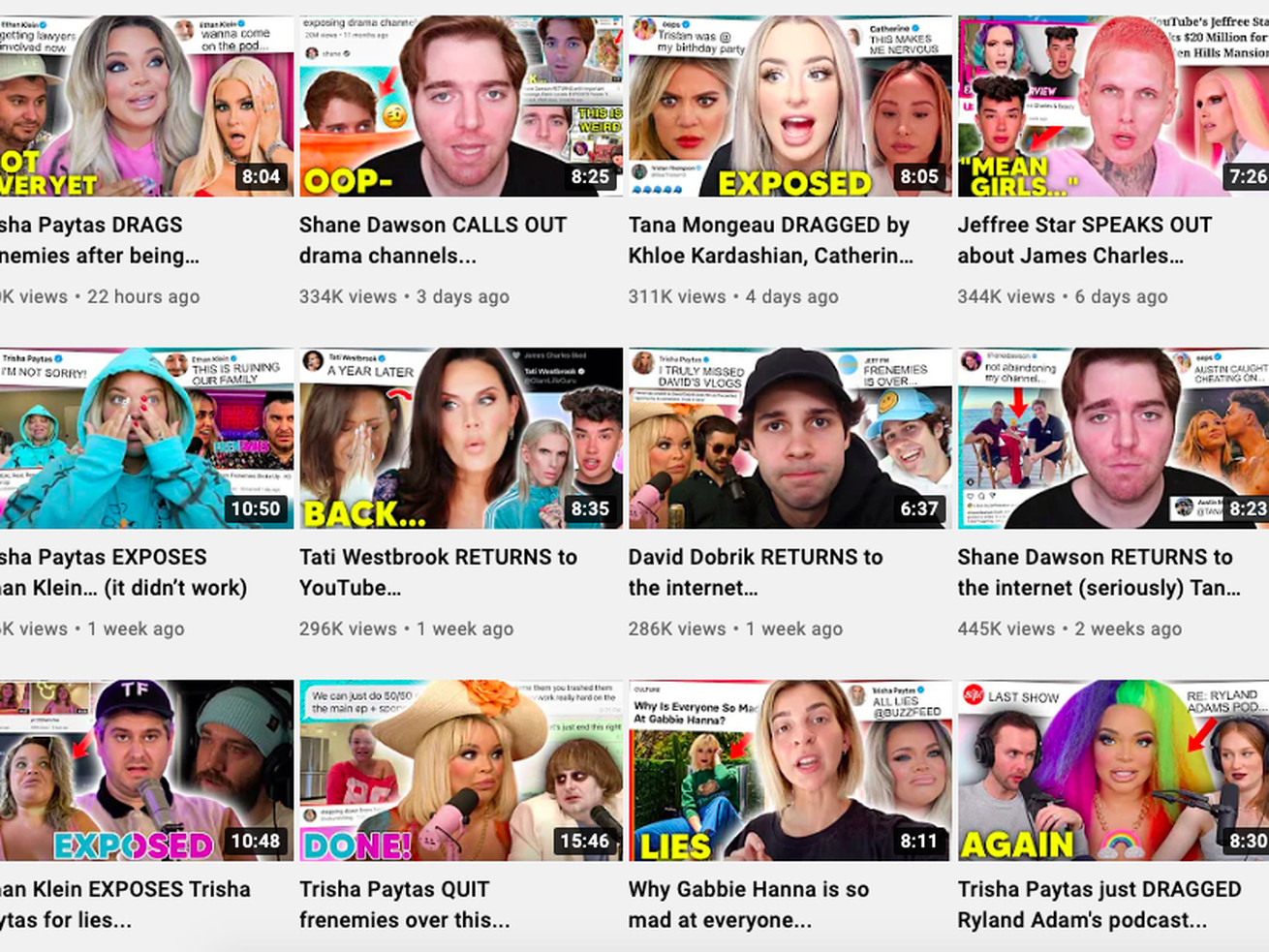 YouTuber scandals fall into one of two categories. Neither is much fun.

Over the last few rounds of YouTuber drama, something finally became clear. A few weeks back, there were two perennially controversial creators fighting over the handling of their respective controversies. About a month later, there was a thing about a popular beauty vlogger who’d disappeared from the internet a year ago following a different feud. Finally, there was breaking news about a beekeeper on TikTok — she’d caused some kind of kerfuffle within the beekeepers-on-TikTok community, and every news publication in the entire world covered it as though it were the most riveting story of the day, even though the whole thing amounted to basically one person’s criticisms, which turned out to be pretty mild and possibly inaccurate in the first place.

The thing that had started to become clear was that none of this was actually all that interesting. In each case, the drama seemed to take the shape of something compelling, but at its core, it simply wasn’t made up of anything real. I read as much as my brain could stand about Trisha Paytas and Gabbie Hanna and why they were arguing with each other, or what the deal was with Tati Westbrook making videos again, and yet no amount of knowledge about the situation made me care about any of it because ultimately what this was all about was people who were just doing their jobs, and their jobs are creating drama. At a certain point, it all starts to feel like when little kids perform the dance they choreographed in the basement for a room full of adults. After the fifth or sixth time, you kind of just want to go back to polite conversation.

Creator drama, for the most part, falls into one of two categories. The first is when someone is accused of doing or saying something despicable and then either addresses or doesn’t address it, which then spurs on a predictable cycle of familiar reactions. The other category is simply too confusing to even begin to understand, and the beef between a network of influencers goes so far back in time and is so in the weeds that in order to unravel the byzantine network of he-said-she-said one must submit to the PhD-level research of watching mostly uninteresting hour-long videos in which maybe one important piece of context is revealed by everyone who was even tangentially involved. Neither category is much fun to digest.

It’s obvious that many people actually do continue to care about the endless cycle of alliances between the major players of the digital economy; there is now an entire industry devoted to describing it in excruciating detail, from tea channels to blind item Instagram accounts. Articles explaining creator drama tend to skyrocket to the top of media companies’ websites (including this one), providing valuable traffic simply because people are searching for something who will tell the story in a narrative that makes some amount of sense. There have, of course, been genuinely intriguing and actually scandalous scandals in the world of YouTube (I find anything related to the career of conspiracy theorist-slash-”documentarian” Shane Dawson absolutely riveting), but for the most part, it’s exhausting.

One of the major problems within this system is that both creator drama and the coverage of it tend to unfold like horse race journalism. Horse race journalism, a term used mostly in the context of politics, means that the media narrative focuses more on optics rather than the actual meat of what’s going on; so, for instance, writing about the fact that Candidate A is pulling ahead of Candidate B in the polls instead of explaining either candidate’s policies or agendas. In the world of celebrity and influencer beef, that’s essentially all we’re getting: Celebrity A Slams Celebrity B; Celebrity B Claps Back! Either side can pull out whatever they see fit to push their narratives and feel like they’ve won. No one is ever asked to question their biases or engage in any sort of critical thinking, and nothing ever really changes.

In the story, Dickson wonders whether all the backlash to Dobrik and his ilk will ultimately end up mattering. “All the HR systems and appearance releases in the world will not solve the central problem of Dobrik and others like him making money off a platform that rewards those who are motivated by the central question of how to make something bigger and better than the last thing,” she writes. “Not even the cancellation of David Dobrik can change the fact that his brand of content — the pranks, the stunts, the thrill of knowing someone is going to be genuinely surprised, or the schadenfreude that comes with knowing someone is genuinely uncomfortable — is one of the motors that keeps YouTube up and running.”

Kids, who unlike adults have grown up with and idolize YouTubers even more so than traditional celebrities, have an innate knowledge of how this culture operates; they know it is based on competing desires for views at the expense of pretty much anything else. Older kids know social media isn’t necessarily real life, and they understand that often their favorite creators are in on the joke. Even as one YouTuber or another gets supposedly canceled every few weeks, they know that they’ll likely be able to resurrect their career anyway, that standoms are willing to forgive even the worst behavior.

And yet many children and teenagers — the primary audience for this sort of clickbaity, outlandish content — don’t yet understand what has to happen behind the scenes in order for videos like these to get made and shared. It’s why providing this necessary context is so crucial to covering influencers, who make their living off of presenting an idealized version of their own lives and actions. Audiences already get to see the highlight reels of their favorite creators; it’s up to the people who cover them to tell the whole story — and crucially, it should come from people who don’t also have a stake in the YouTuber influencer circus, people who have an obligation to the truth over, say, video views. (A YouTuber might argue that journalists too are out only for page views, which is certainly true in some circumstances, but in order to be taken seriously as a journalist, you also have to, y’know, be good at your job.)

Human beings are inherently messy bitches who live for drama, me most of all. But like any good Real Housewivesviewer, I know that the most interesting feuds are the ones the characters don’t want out there, the meta narrative taking shape behind the curtain. When creators know they can bank on controversy, the bar of what counts as good gossip gets far higher. If we’re all going to participate in this problematic merry-go-round, we should at least get to enjoy the ride.

This column first published in The Goods newsletter. Sign up here so you don’t miss the next one, plus get newsletter exclusives.