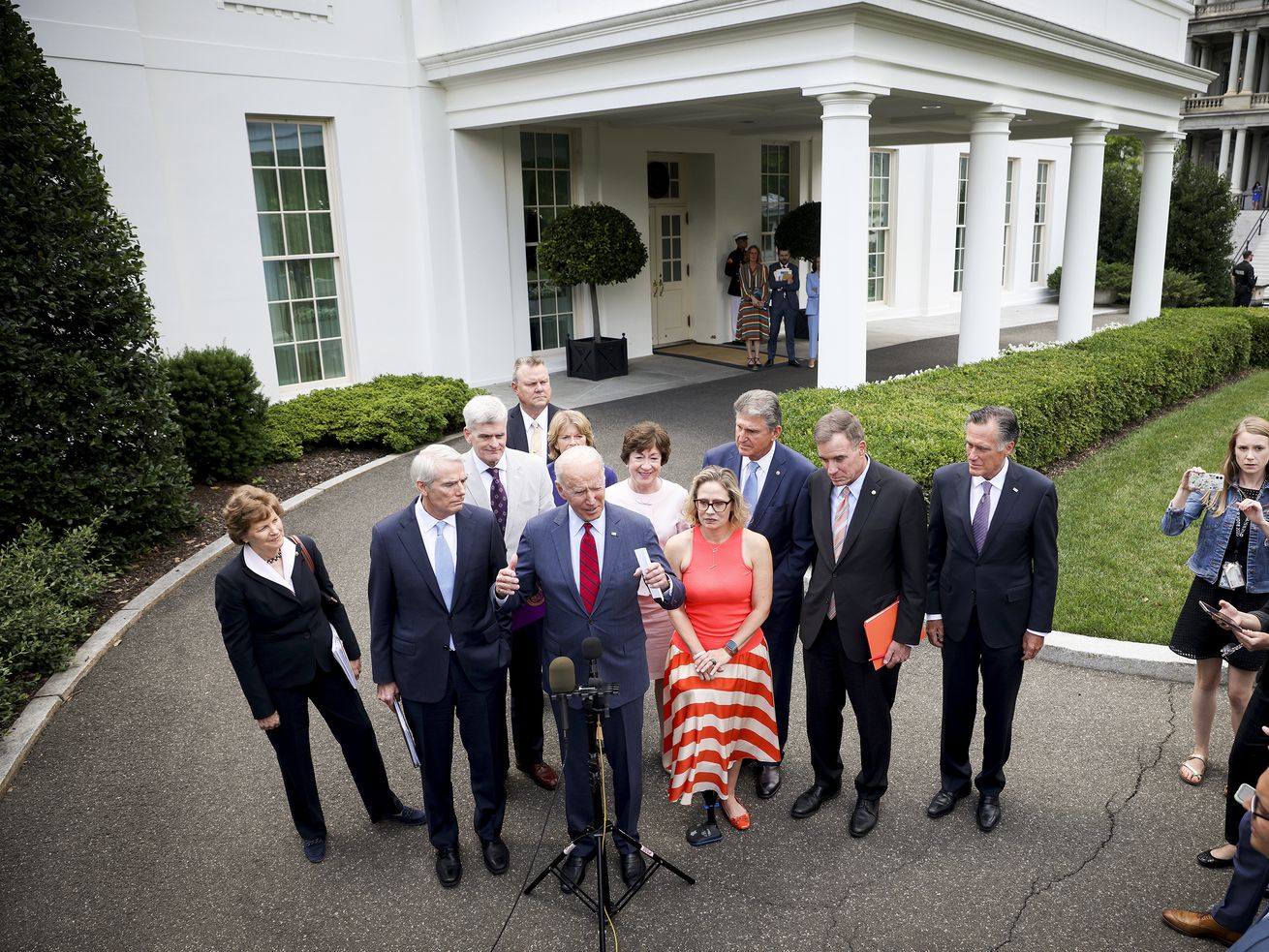 The deal shows the limits of bipartisanship in Congress.

For a moment last week, President Joe Biden’s vision of a dealmaking, bipartisan Senate that gets big things done for the American people looked like it could soon become reality. With Biden’s announcement that Democrats and Republicans “have a deal” on infrastructure, it seemed both sides in Washington, DC, were on the verge of coming together to pass a large bill — one that would not only help rebuild America’s roads and bridges but also, potentially, move to tackle climate change, expand access to broadband internet, and remove lead from drinking water.

Then things got complicated. Biden said he wouldn’t sign the deal if congressional Democrats didn’t also pass a separate reconciliation bill enacting the rest of his agenda. That invited a Republican revolt, as previous backers like Sens. Lindsey Graham (R-SC) and Jerry Moran (R-KS) threatened to pull support. Though Biden has walked back his remarks, it’s still not clear if the infrastructure deal can now get the 10 Republican votes it needs to overcome a filibuster in the Senate.

The episode exposed the fine line that Biden has walked not just on infrastructure but through his brief time as president so far. Biden ran as a moderate and defeated challenges from more transformative candidates like Sen. Bernie Sanders (I-VT) — vowing that, as an institutionalist who had been in Congress for decades, he could get Congress to work together, across the aisle, again.

But as president, Biden’s legislative ambitions have been expansive. And while he has tried to get bipartisan support for his ideas, the biggest bill passed under his leadership — a $1.9 trillion economic relief package — relied on Democrats passing it through razor-thin, party-line margins.

The infrastructure deal exemplifies the contradictions. Last week’s news was about a $1 trillion deal that some Senate Democrats and Republicans are working to get through the 60-vote threshold required overcome the filibuster. But, as Biden has said, Democrats are also working on another measure, ranging anywhere from $2 trillion to $6 trillion, that could pass Congress with only Democratic support by using the reconciliation process. Biden is promising and working toward bipartisanship but already planning to sign a partisan bill to fill the void the bipartisan measure leaves in place.

It’s still not clear if this will all pan out. The infrastructure agreement so far is only on the thinnest of frameworks. As people like Graham and Moran question their support, it’s less likely that the final measure could get the 10 Republican votes it needs to pass the Senate. It’s also not clear if Democrats can get the votes they need to pass the bigger infrastructure measure, with moderates like Sen. Joe Manchin (D-WV) voicing support for a reconciliation bill but also skepticism toward a partisan bill that’s too large.

Meanwhile, the rest of Biden’s agenda, from voting rights to gun control, now looks very unlikely to get anywhere in Congress. If lawmakers can barely achieve a bipartisan moment with infrastructure spending — which once was, as Biden noted last week, a common source of bipartisan consensus — it’s unlikely more contentious legislation stands a chance.

To put it another way: Biden has framed his legislative agenda with the goal of proving to the American people that the government can work for them — as he put it, that “we can deliver for our people.” Even if Biden delivers on infrastructure, with a reconciliation bill in tow, it’s already clear Congress can’t fully live up to that ideal.

The infrastructure deal is very thin so far

Right now, the best hope for Biden’s agenda is that Congress passes a limited infrastructure deal on a bipartisan basis and then Democrats enact the rest of Biden’s infrastructure plans in a separate bill along party lines.

So far, Democrats and Republicans have made some headway on the bipartisan deal. They have agreed to a very vague framework that includes funding for roads and bridges, public transit, passenger and freight rail, electric vehicle infrastructure, clean drinking water, and broadband internet, among a few other areas. The agreement goes into almost no detail beyond those broad categories — with lawmakers now working to get more specific as they transform that framework into actual legislation.

Where both sides haven’t reached any agreement yet is how all of this will be paid for. Democrats want to pay for it largely by undoing parts of former President Donald Trump’s tax law, while Republicans suggested raising the gas tax and electric vehicle charging fees. With both sides rejecting each other’s ideas, they instead put out a list of potential revenue sources, ranging from stronger enforcement of current tax laws to spending caps to public-private partnerships. But the sides haven’t reached any concrete agreements here, and all of these ideas may not even be enough to fund the full bill.

Democrats have also promised to pass an additional infrastructure bill through reconciliation (to bypass the filibuster on a party-line vote). This bill would aim to fill in the other parts of Biden’s agenda left out of the bipartisan deal, including broader action on climate change and “human infrastructure” measures like an expanded child tax credit and elder care.

But the party hasn’t come to an agreement on this measure. Manchin suggested the bill could be as little as $2 trillion, while Sanders has worked on a $6 trillion proposal. There is, suffice to say, a very wide space in between.

In short: A lot is up in the air. The specific details are still being worked out. It’s not clear if any of this will happen.

The uncertainty works against the overall goal of Biden’s agenda. In a rejection of times when Democratic presidents declared that “the era of big government is over,” Biden has strived to show the American people that the government can help solve big problems. As the administration claimed when it announced the bipartisan infrastructure framework, “At this moment in our history, President Biden believes we must demonstrate to the world that American democracy can deliver for the American people. Today, the President is showing that democracy can deliver results.”

But if Congress ultimately falls short on a bipartisan deal, a reconciliation measure, or both, the whole process would show the opposite: that the American government can’t deliver after all.

Even if Congress does manage to pass the bipartisan deal and reconciliation bill, it’s not exactly a glowing endorsement of bipartisanship or Biden’s old way of doing things.

To the contrary, the negotiations have shown the clear limits of bipartisanship. After all, the plan for Democrats right now is to work with Republicans on a $1 trillion infrastructure bill and then go around them and pass another bill multiple times that size to finish the work. That second step simply would not be required if bipartisanship worked as hoped.

In other words, Congress might ultimately deliver for the American people, but it won’t be due to the “epiphany” Biden hoped Republican lawmakers would have in a post-Trump era. It will be because Democrats found a loophole to overcome the filibuster while continuing to disagree even within their own party on whether they should repeal the filibuster and let the Senate function through a simple majority.

Meanwhile, much of the rest of the Democratic agenda seems dead on arrival. A big voting rights bill collapsed due to Republican opposition and Democratic skepticism. Larger health care reform, efforts to address policing and systemic racism, and gun control measures also have struggled to gain not just bipartisan support but even a consensus among Democrats. That the infrastructure deal has hit so many bumps on the road invites little confidence any of those other measures will get bipartisan support, and limits on the reconciliation process prevent Democrats from pursuing these other efforts without Republican support for now.

In fact, if the infrastructure bill gets done, it may be the last big initiative by the federal government until at least the 2022 midterm elections and maybe through all of Biden’s first term. This could be it for Biden’s presidency.

Congress has managed to pass or make serious progress on some minor bills, including science funding legislation and a water infrastructure bill. But these are more the basics of government than the kind of transformative change that progressives hoped a Democratic trifecta holding the House, Senate, and White House could achieve.

Rather than showing that the federal government can deliver, then, Congress is reinforcing the limits of the American political system.

There is still time for all of this to change. Biden has only been in office for around 160 days. Maybe some sort of bipartisan breakthrough could arrive.

But the wrangling around the infrastructure deal, at least, gives little confidence a bigger breakthrough will happen — and if it does, it will likely be much more limited than anyone would like. The government might deliver for the American people, but not on everything that was once promised.

Italy’s coronavirus crisis could be America’s
The two quid pro quos at the heart of the impeachment inquiry
9 women to watch from this year’s midterms
Vox Sentences: California, burning in the dark
How to protect yourself from coronavirus, according to the White House
Trump issued an executive order effectively banning TikTok if it doesn’t sell in the next 45 days