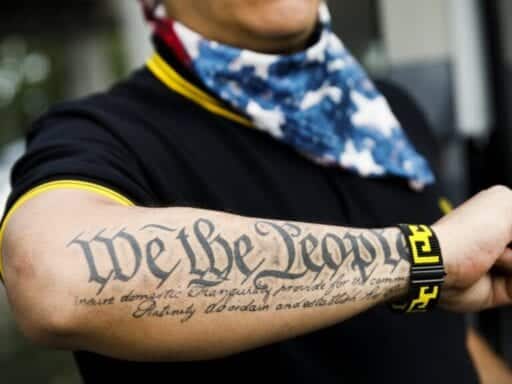 A member of the “Proud Boys” shows his tattoo during “The End Domestic Terrorism” rally in Portland, Oregon, on August 17, 2019. | John Rudoff/AFP/Getty Images

What the conservative critics of the New York Times’s 1619 Project miss.

In 1956, the 27-year-old Martin Luther King Jr. traveled to address a meeting of the black fraternity Alpha Phi Alpha in Buffalo, New York. The speech, titled “The Birth of a New Age,” is a largely hopeful meditation on the prospect for racial progress in America. Two years after Brown v. Board of Education, and amid waves of decolonization freeing black and brown peoples from European colonial rule around the world, King saw a new and more just world being born from the destruction of the old.

But this passing political order, King noted, was very old indeed. In the United States, it dated back to 1619:

We know the history of this old order in America. You will remember that it was in the year 1619 that the first Negro slave was brought to the shores of this nation. They were brought here from the soils of Africa and unlike the Pilgrim fathers who landed here at Plymouth a year later, they were brought here against their will. For more than 200 years Africa was raped and plundered, a native kingdom disorganized, the people and rulers demoralized and throughout slavery the Negro slaves were treated in a very [in?]human form.

It is this history that defined the United States for the entirety of King’s lifetime — one he feared might well live on absent struggle.

“It might be true that old man segregation is on his deathbed but history has proven that social systems have a great last-minute breathing power,” King observes. “The vanguards and the guardians of the status quo are always on hand with their obstacles in an attempt to keep the old order alive.”

It is in the spirit of King’s observation that the New York Times launched the 1619 Project, a journalistically ambitious attempt to illuminate the “great last-minute breathing power” of America’s racial caste system.

The project’s essays cover everything from electoral politics to mass incarceration to the role of sugar in our diet, tracing links from America’s slave-owning history through the Jim Crow era and into persistent racial inequalities today. It’s an attempt to correct America’s historical ignorance about the causes of contemporary injustice, to place (as it says in the promotional text) “the consequences of slavery and the contributions of black Americans at the very center of the story of we tell ourselves about who we are.”

As if on cue, King’s “guardians of the status quo” — those contemporary conservatives who see themselves as “standing athwart history yelling stop” — appeared to condemn it.

National Review editor Rich Lowry argued that the essays presented the “odious and reductive lie” that “racism is the essence of America.” The Federalist’s John Daniel Davidson accused the Times of “sweeping historical revisionism in the service of contemporary left-wing politics.” The Resurgent’s Erick Erickson, with the thoughtful restraint he’s known for, argues that the 1619 Project could literally trigger the overthrow of the US government:

If the nation is founded on slavery and slavery is woven into the very fabric of our society, then our society is illegitimate. The only way to overcome it is to overturn it. That would take revolution. This is the path the New York Times goes down. Once it lights this fire, it will not be able to control it. But it wants to strike the match anyway.

At the core of these defenses is a belief in American innocence — a notion that no matter how important the role slavery played in the country’s creation and history, it cannot be used to define America; that the United States’ founders must be pure and their ideals untarnished. Otherwise, they warn, we risk traveling down the path Erickson describes: civil strife and political ruin.

But even a cursory read of the project’s tone-setting introductory essay, by Nikole Hannah-Jones, makes clear that the point is not to delegitimize American ideals, but to deepen and expand them. She illustrates how being honest about the history of racial oppression works to reveal the ways in which black Americans have, despite all the barriers placed in front of them, become the guardians of America’s highest ideals of equality and individual liberty. That despite everything, the United States can be saved from its own history if we fight for it.

“Despite being violently denied the freedom and justice promised to all, black Americans believed fervently in the American creed,” Hannah-Jones writes. “Through centuries of black resistance and protest, we have helped the country live up to its founding ideals. And not only for ourselves — black rights struggles paved the way for every other rights struggle, including women’s and gay rights, immigrant and disability rights.”

This is King’s brand of optimism, the extraordinary patriotism of the oppressed, on display — not the scorched-earth anti-Americanism that conservative critics see.

The insistence on this idea stems partly from the crucial role the founding era plays in conservative ideology. Its most celebrated jurisprudential doctrine, originalism, holds that the Constitution can only truly be understood as an expression of the framers’ intent. If that intent was profoundly shaped by their racism or self-interest as slaveholders, then this way of seeing the Constitution is troublingly myopic.

But there’s a deeper point here: a particular vision of patriotism that centers on the ideal of white innocence.

For conservatives, being a patriot means believing that America is an essentially good country; its sins are aberrations rather than central to its history. There is no room for a nuanced patriotism that sees a nation with racism as a central part of its DNA, but also a nation that can be improved through constant struggle and work. It is the “America: Love It or Leave It” bumper sticker, expressed in more florid prose.

The conservative backlash to Colin Kaepernick taking a knee, an anti-police brutality gesture developed in part by a veteran to be a twinned sign of patriotism and protest, is another example. So too was the conservative freakout when Michelle Obama noted that the White House was built by enslaved people — and the way her husband was constantly derided as being racially divisive because he dared to acknowledge its enduring relevance.

In the conservative view, the United States has largely been redeemed from slavery through the Civil War, from segregation by the civil rights movement. Erickson describes this in explicitly Christian terms, substituting America for the martyred Jesus:

It is also objectively true that slavery was this nation’s original sin. But it is also true that hundreds of thousands of people spilled their blood on the Union Army side as propitiation for that sin.

The idea that America is somehow past its “original sin” would be news to black people, who live in a society that’s deeply stratified on racial lines. The median wealth possessed by white families is roughly 10 times that of black families — a gap that’s widening not shrinking. White Americans’ life expectancy is four years longer than that of black Americans. School segregation, a scourge that seemed on the verge of defeat in King’s time, has come roaring back.

But this idea of a redeemed America allows conservatives to downplay the continued operation of racism today — to dismiss these persistent racial inequalities as the result of alleged black cultural pathologies, to argue that the extremely well-documented idea of structural racism is a myth. It is the idea of continued white innocence, of an essentially good America, that allows mainstream conservatives to accuse Democrats who talk about racism and black journalists who write about it as being race-baiters who work to divide America. It allows “Love It or Leave It” patriotism to survive untroubled by the awkwardnesses of reality.

The 1619 Project challenges not only the founders’ innocence but that of white Americans who downplay racism’s vitality today.

More than 10 years after the Alpha Phi Alpha address, and just a year before his assassination, King spoke to the annual gathering of the Southern Christian Leadership Conference on the next steps for the civil rights movement. Though black activists had “caused the sagging walls of segregation to come tumbling down,” King said, their work was far from over.

“Of the good things in life, the Negro has approximately one half those of whites. Of the bad things of life, he has twice those of whites,” he said. “Half of all Negroes live in substandard housing. And Negroes have half the income of whites. When we turn to the negative experiences of life, the Negro has a double share: There are twice as many unemployed; the rate of infant mortality among Negroes is double that of whites.”

Under such conditions of inequality, King argued, the first thing needed was to be clear on the reality of the status quo — to lay plain the nature of current injustice so America can plot a better course.

“In order to answer the question, ‘Where do we go from here?’ which is our theme, we must first honestly recognize where we are now,” he says. “We still need some Paul Revere of conscience to alert every hamlet and every village of America that revolution is still at hand.”

The Times’s project is not above criticism, but its creators have tried to play this role. The furious reaction from the American right only proves how much their work needed.