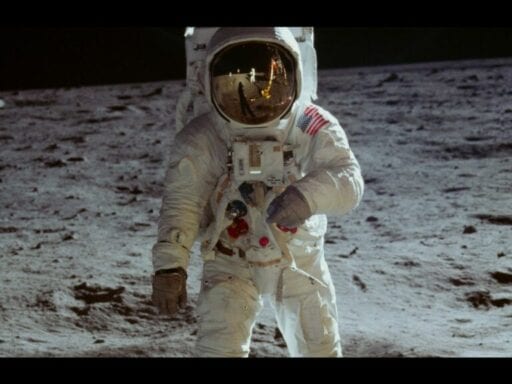 How director Todd Douglas Miller turned a familiar historical moment into something transporting and transcendent.

Fifty years ago this July, the first men landed on the moon, the culmination of the Apollo 11 mission. “Iconic” is an overused word, but the images recorded during that mission deserve it: the blast-off moment, the American flag planted on the lunar surface, Neil Armstrong reflected in Buzz Aldrin’s helmet.

Those images have been revisited countless times in the five decades of pop culture since. Just last year, the masterful film First Man told the story of the moon landing as part of a character study of Neil Armstrong. The landing itself and the images we have from it symbolize a moment in history — whether real, mythological, or aspirational — in which anything seemed possible, a moment when it was possible to believe that humanity could unite toward a common goal. The Apollo 11 images have come to represent hope.

The new documentary Apollo 11, directed by Todd Douglas Miller, harnesses those images to powerfully retell the story of the mission. But Miller’s film does a lot more than just retread familiar history. Using never-before-seen footage and sound from the mission that has been meticulously scanned and restored, Apollo 11 moves from launch to safe return in a way that makes you feel as if you’re living through it. There’s minimal onscreen text, a couple of very simple illustrations to show the craft’s trajectory, and no talking heads.

The result is an extraordinary film. It is grand and awe-inspiring, particularly if you can catch it in IMAX, where the larger-format images create the feeling of being engulfed by what you’re watching onscreen. It’s almost as if you’re actually on the moon.

Yet the film also focuses on the intimate moments, tedious calculations, and the army of scientists and technicians who truly propelled the mission along. It took much more than a few indelible images to get Neil Armstrong, Buzz Aldrin, and Michael Collins to the moon and back again — something they all noted in writing about their experience afterward.

Apollo 11 focuses not just on the awe-inspiring moonscapes but on the intricate, intimate moments of the mission

When I talked to Miller recently about the film, he noted that based on reading the astronauts’ books, it’s clear that the “most iconic moments from the mission” weren’t the ones we think of automatically. “It wasn’t landing on the moon. It wasn’t getting back safely, the return, taking off, all the big moments that always get broadcast and retold time and time again. It was all the little moments: approaching the moon, seeing the solar eclipse, having the moon appear.”

So that’s what he sought to bring to the film — and he had the benefit of some good luck. After CNN Films approached him to work on the documentary, Miller contacted the National Archives about restoring footage from the mission. “I said, ‘Look, what would it take for me to re-scan all of the 16 and 35 [mm film] that was related to Apollo 11?’” he recalled. “There had been no major effort to do it in over a decade. I said, ‘If I did it, I would just do it all. What are we looking at?’ They were like, ‘You want to do what?’”

They agreed. But the already huge undertaking was made especially massive by the discovery of 65mm reels that had been sitting in a vault for decades. The large-format film, which captures extraordinary, rich images and was being used at the time for Hollywood productions like The Sound of Music, was shot by NASA employees as well as the crew of a documentary to be called Moonwalk One, which was released in 1972. Much of the footage the Apollo 11 team worked with had never been seen by the public. And there were more than 11,000 hours of audio to match.

Miller and his team waded through it all — a true “divide and conquer” effort, as he put it — and worked with the post-production company Final Frame to digitize it. “At one point, we were going to do it all in 4K,” Miller told me, explaining his initial plan to produce the film in a very high-resolution digital format. “Then we were in a meeting and Final Frame’s owner, Will Cox, said, ‘You know, if you wait six months, I think we can do it at 16K.’” That would require developing a new scanner, but Todd decided the delay would be worth it. “I don’t want to look back on this moment in 20 years and have said no,” he said. “That six months turned into eight. It was definitely worth it, but it was nail-biting the entire time.”

When all the scans were finally complete, the result was about a petabyte of information (1 million gigabytes).

Apollo 11’s imagery is stunning, even if you’ve seen the moon landing many times before

Indeed, the team’s efforts and patience were well worth the outcome. The quality of Apollo 11’s footage is hard to believe — we’re simply not used to seeing such high-resolution imagery from that time period, especially inside NASA control rooms or among the throngs of spectators who gathered at the Kennedy Space Center in Florida to watch the launch. And yet, though most of us haven’t seen the evidence, people were filming the whole time. “These camera guys were asked to turn their back on what is basically one of the most historic things in human history and just shoot this way,” Miller says, gesturing away from where the shuttle would have been — all to make sure the ordinary civilians gathered were part of the story too.

And it wasn’t just trained camera operators documenting the mission; among the film’s credited cinematographers are Aldrin, Armstrong, and Collins, all of whom shot photos and film on the moon itself.

All of the resulting footage and sound tells a stirring story. Chatter in the control rooms and in the spacecraft is mixed with voiceover from public figures like Walter Cronkite, in narration drawn from his news coverage at the time. Jokes fly between the astronauts and mission control, and there are moments of tension and levity. Men wipe their brows with relief. Aldrin plays “Mother Country” on a cassette tape; we hear it through the sound link from space to the ground. The astronauts explain to Mission Control what sleeping arrangements they’ve come up with in the cramped craft.

“There’s a lot of tedious things that happen when you go to the moon, simple things,” Miller says. “You’re just trying to survive. How do you go to the bathroom? You’re shaving. All the little things. We wanted to highlight that and also the humanity and just let it play out.”

Often, moments like the moon landing are sliced into snippets and sound bites that make it seem like Aldrin, Armstrong, and Collins were the only true heroes, propelling the mission along. But mixing their individual moments into the bigger picture, and showing how many people were watching and working and hoping for the best, makes the team effort, and the great scientific and technical triumph, come through much more clearly. Even the single most famous moment of the moon landing — Armstrong’s “one small step for man” statement when he first touched the lunar surface — is expanded; the footage keeps rolling, and then Armstrong starts making observations about the lunar dust, and its depth, for NASA’s research.

And that feels especially appropriate for a film that required such a large team effort to complete, from Miller and his cohort to the post-production house to the archivists and, of course, the many people who shot the source footage a half-century ago. “There was just a ton of cinematographers, ordinary people, shooting,” Miller says. “It’s some of the most gorgeous stuff I’ve ever seen. My hope is, even though a lot of these people aren’t around anymore, that hopefully they get credited and honored now that the film is coming out.”

Vox Sentences: Pardon me?
Americans have fewer kids than they say they want. Alaska has a solution.
Trump just lost his best chance to kill DACA this year
How the coronavirus outbreak is roiling the film and entertainment industries
US and China reach a “phase one” trade deal
Cesar Sayoc, who sent explosives to Trump critics, just received a 20-year sentence