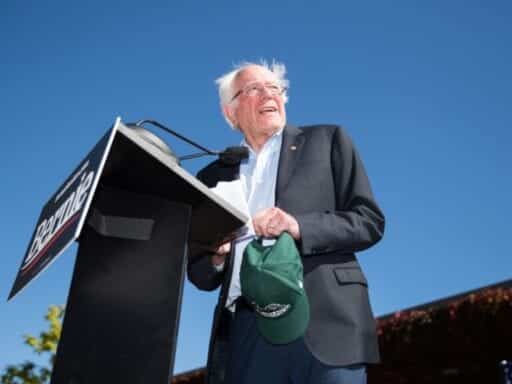 Sanders wants to curb the influence of millionaires and billionaires in Democratic Party politics.

If Bernie Sanders becomes the Democratic nominee, he envisions a 2020 Democratic National Convention that is completely free of corporate sponsorship.

Under a new anti-corruption plan Sanders released Monday morning, the progressive senator from Vermont is taking aim at money and influence within political parties, national party conventions, and presidential inaugurations. His plan would also scrap the Federal Election Commission and replace it with a new, tougher Federal Election Administration and attempt to overturn the Supreme Court ruling Buckley v. Valeo, which considers money the same as constitutionally protected free speech.

“When we win the Democratic nomination and defeat Donald Trump, we will transform our political system by rejecting the influence of big corporate money,” Sanders said in a statement. “Our grassroots-funded campaign is proving every single day that you don’t need billionaires and private fundraisers to run for president.”

The plan is focused extensively on getting corporate money out of the Democratic National Committee (DNC), a group Sanders clashed with in 2016 after former top DNC staffers dismissed and derided his campaign. In his new plan, Sanders would ban corporate contributions to the Democratic Party Convention and its related committees, and he would instate a lifetime lobbying ban on Democratic National Committee chairs and co-chairs.

Sanders certainly has showed — twice, now — that he can run a presidential campaign without relying on corporate donations. His grassroots-powered campaign boasted the most money raised in the third quarter of fundraising among Democratic presidential candidates.

It’s noteworthy that while Sanders has spent both his 2016 and 2020 presidential campaigns railing against the influence millionaires and billionaires, this is the first extensive anti-corruption plan he has released. And though it overlaps slightly with plans released by fellow 2020 candidate Sen. Elizabeth Warren, Sanders new plan is covering some different ground.

Sanders’s core message hasn’t changed, but he’s getting into much more detail as to how he plans to combat money and corruption in politics.

Other anti-corruption plans released by 2020 presidential candidates have focused on combatting the influence of money in all three branches of government; Warren has an extensive plan focusing on the legislative, executive, and judicial branches.

Sanders is putting his focus elsewhere; his plan makes it clear he wants to cut off corporate money in politics before a new president is even elected, while also ensuring money does not hinder fair elections. Some of his reforms would go into effect if he became the presidential nominee, before the general election even gets started.

Sanders’s plan lays out the practices he plans to curb — namely, corporations donating to national party conventions and presidential inaugurations. His campaign cites an OpenSecrets report that says 17 donors contributed three-quarters of the funding for the 2016 Democratic National Convention funding, including Bank of America, Comcast, and Facebook.

One of Sanders’s biggest proposals when it comes to election reform is abolishing the Federal Elections Commission as it currently exists and replacing it with a new Federal Elections Administration. It’s worth noting the FEC effectively shuttered after Federal Election Commission Vice Chairman Matthew Petersen recently resigned. And before that, the commission had been deadlocked for months because its equal number of partisan commissioners couldn’t agree on decisions.

As the Center for Public Integrity’s Dave Levinthal reported, the FEC currently can’t conduct meetings, levy fines for wrongdoing, make rules, or conduct audits. So Sanders is proposing a complete overhaul of the system. Here’s what it would look like.

Sanders’s campaign noted they would likely build on this by borrowing from other proposals, including House Democrats’ extensive anti-corruption bill known as HR 1, which includes reforms like prohibiting members of Congress from using taxpayer money to settle sexual harassment or discrimination cases and banning members of Congress from serving on boards of for-profit entities.

Overall, much of what Sanders is proposing relies on the cooperation of Congress and on winning court battles — successfully doing either could prove to be a challenge. However, because he has included party-level anti-corruption initiatives, his plan sidesteps some of these issues: If he wins the primary, at least some of Sanders’s proposals will more easily go into effect.

We have to accelerate clean energy innovation to curb the climate crisis. Here’s how.
Manafort trial: Both sides tried to use Rick Gates’s “flipping” to their advantage
Factory farms are an ideal breeding ground for the next pandemic
Hackers have been holding the city of Baltimore’s computers hostage for 2 weeks
Israel’s hugely controversial “nation-state” law, explained
How yogurt took over the dairy aisle