Don’t sleep on Sorry for Your Loss, a terrific new half-hour drama airing on Facebook 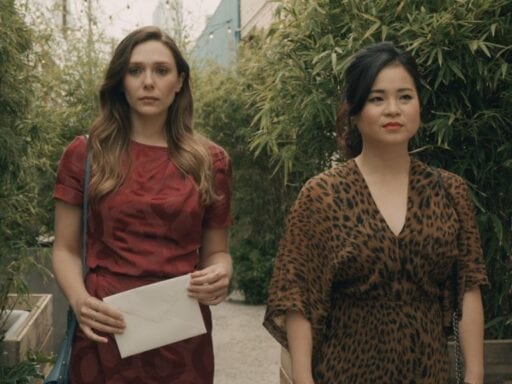 The new series charts a young widow’s grief and gives Elizabeth Olsen a part worthy of her talent.

Sorry for Your Loss puts the peak in peak TV.

It airs on a platform new to the prestige programming game (Facebook Watch). It stars a genuine movie star (Elizabeth Olsen). It seems primarily made to appeal to TV critics, its subject matter is incredibly niche, and its first-week viewership seems destined to prove nobody’s watching these streaming shows. (As I write this, barely 20,000 people have watched the series’ fourth episode, by Facebook’s notoriously unreliable view count.)

But even when you control for the fact that I’m in the show’s core audience of TV critics, Sorry for Your Loss strikes me as something quite special. It has its problems here and there — the subplots about the gym operated by Olsen’s character’s family mostly fall flat — but I get why Facebook Watch made such a big push for this series. It’s delicately observed and emotionally acute, and its first four episodes (all available for free to anyone with a Facebook account) tell a lovely story about a widow’s grief in just under two hours.

I realize “a lovely story about a widow’s grief” doesn’t sound like an easy watch, but the series’ fourth episode, “Visitor,” is a terrific example of how the show uses its emotional rawness to explore the experience of grief without creating a wallow.

Sorry for Your Loss understands grief is intensely personal, but it’s not owned by any one person

When Sorry for Your Loss begins, a few months have passed since the death of Matt (Mamoudou Athie, who appears in several flashbacks in each episode). His friends and family still grieve him, especially his wife, Leigh (Olsen), who likely didn’t think she would be a widow so young.

But that word “especially” is a charged one. Sorry takes great pains to dig into how Leigh’s grief is her own, but it is not necessarily greater or more significant than the grief of anyone else who’s lost Matt. In one episode, Matt’s brother, Danny, played by Jovan Adepo, tells Leigh that while she can eventually get another husband, he’ll never get another brother. And while that’s cruel, it’s also true.

This is one of the things that marks good television — the ability to understand the choice of protagonist, while not arbitrary, always centralizes a certain perspective while decentralizing other perspectives that might bring just as much to the table. That understanding is present all over the place in Sorry, which is filtered through Leigh’s perspective but never forgets that all of the other characters, including her sister (Kelly Marie Tran) and mother (Janet McTeer — spot-on “Elizabeth Olsen’s mom” casting), miss Matt, too, in their own ways.

All of this comes to a head unexpectedly in “Visitor,” in which Leigh rescues a seemingly stray dog and takes it in, thus prompting a series of flashbacks to her life with Matt that fill in bits and pieces of the narrative, both on an emotional level and a plot level.

The latter is likely the most significant for the series going forward. Leigh has slowly started to realize, over the course of the first four episodes, that she might not have known her husband as well as she thought. He kept his phone locked, and she doesn’t know the passcode. And why was his credit card in the freezer?

But remembering the dog Matt owned when he first met her — which gradually became the couple’s dog — Leigh realizes what his passcode must have been (the day when the two realized it was best the dog be put down, and Matt saw Leigh for the kind of caring, loving woman he wanted to marry). She unlocks the phone, thus setting up the next handful of episodes (which I’ve seen — they’re good!).

But even more significant are the emotional reveals, and they’re what truly make “Visitor” special. Matt, you see, struggled with depression, and Sorry for Your Loss understands both what differentiates depression from grief, and why it can be so hard for a partner who doesn’t struggle with the condition to understand a partner who does.

In “Visitor,” you can never quite hold onto anything you love, no matter how much or how little

“Visitor” is both the name of the episode and the name of the stray dog Leigh takes in, who scratches up her mother’s house (much to her mother’s disgust) and causes little pieces of destruction all over. But he remains as fundamentally lovable as any good boy would be. By the episode’s end, Visitor’s owner has gotten in touch — something Leigh claims she wanted to happen — thus taking away something else, and prompting her memory of Matt’s dog.

Sure, the dog’s a symbol of all of the ways that Matt’s death still haunts the places he lived and the people who loved him, scratching up the doors and floors and just generally making a mess of their emotions. But the symbol is not clear-cut.

Leigh’s grief might grow less present in time. She might date again and might even marry again. But grief is never going to leave with its “real” owner, the way Visitor does. It’s a shared constant, among those who knew and loved Matt.

The dog is also a symbol of the ways that Leigh never quite understood Matt’s depression, how she tried to help him out using herbal remedies that helped her mom with a bout of postpartum depression. Matt’s depression shared her home, but it was never really hers, and when he died, he took it with him. But she can still see the scratch marks it left.

When I watched “Visitor,” I was worried it was building to a major reveal of Matt committing suicide or something similar, that it was reducing mental illness to a plot twist, but I should have known the series was too smart for that. (Here, I will note that it is created by the playwright Kit Steinkellner and show-run by the unheralded Lizzy Weiss, who turned the series Switched at Birth into a vital examination of American class, despite its gimmicky premise.) Instead, it ends with Leigh unlocking Matt’s phone, looking at the list of messages he hasn’t listened to, still unsure of who her husband really was.

That’s the thing about missing someone — they didn’t need to have a super dramatic hidden life for you to still wonder if you didn’t really know them. All they needed was to be another human being, filled with their own thoughts and emotions and secret fears that kept them up nights, until they were no longer around for you to ask, “Hey, what’s up? Everything okay?”

Even though you might have slept alongside them, might have lived a life, might have loved them deeply, death only makes all the more clear that they were still an ocean, with depths you would never explore.

Sorry for Your Loss is streaming on Facebook. New episodes debut on Tuesdays at 9 pm Eastern.

Google says it won’t use your Fitbit data to target you with ads. But what else will it do?
Trump denies McGahn’s exit had anything to do with Russia investigation
Prosecutor: Roger Stone lied because “the truth looked bad for Donald Trump”
The unexpected benefits of being weird
The Harvey Weinstein jury deliberations so far, explained
The fight to end Roe v. Wade enters its endgame next week