Factory farms abuse workers, animals, and the environment. Cory Booker has a plan to stop them. 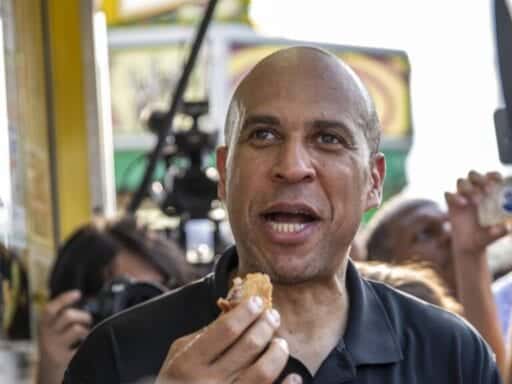 He would impose a moratorium on the biggest factory farm polluters.

Sen. Cory Booker (D-NJ), the only vegan in the US Senate and, to my knowledge, the only vegan candidate running in the 2020 Democratic primaries, has unveiled legislation that would impose an immediate moratorium on the biggest factory farms in the US and phase them out entirely by 2040.

It’s an incredibly ambitious measure that would constitute the most meaningful federal action to date in making animal agriculture less dangerous for the environment and more humane to animals.

Booker’s Farm System Reform Act of 2019 would, among other important provisions, put a pause on new construction of large concentrated animal feeding operations (CAFOs), a term the EPA uses to refer to animal factory farms that produce meat and poultry. Existing CAFOs above a certain size would be banned from expanding. It would also halt their growth by establishing a $100 billion fund over 10 years to buy out existing CAFOs and promote the transition to “agriculture activities such as raising pasture-based livestock, growing specialty crops, or organic commodity production.”

It’s not a plan that, on its own, would end factory farming in the US. But it would be a significant step toward abolishing factory farms, and its introduction by a major presidential candidate is a sign that national politicians are starting to take food and animal welfare issues seriously.

CAFOs as a whole provide most of the meat and poultry eaten by Americans. Estimates from the Sentience Institute, an animal welfare research organization, suggest that CAFOs contain over 99.9 percent of chickens raised for meat, 99.8 percent of turkeys, 98.3 percent of pigs, and 70.4 percent of cows in the US.

Booker’s bill applies to the largest subset of these, which account for most farm animals in the US. The Booker bill’s cutoff for chickens is 125,000 per facility; the Sentience Institute estimates that at least 97.3 percent of US chickens raised for meat are in facilities with more than 200,000, meaning that the vast majority of these chickens are in facilities on which Booker’s bill would place a moratorium.

Large CAFOs as a model have major, mostly negative ramifications for the welfare of animals that these facilities house. “The large facilities are almost uniformly dependent on intensive confinement methods,” Jonathan Lovvorn, a veteran practitioner of animal law who now lectures at Yale Law School, said. “Battery cages, veal crates, gestation crates — these are the things that make these facilities work.”

If you’re unfamiliar with these methods, it’s worth emphasizing how brutal they are. Battery cages, for instance, which have long been the dominant method for housing egg-laying hens, contain about five to 10 birds each, with as little as 67 square inches per bird — roughly the size of an iPad. And that’s for producers that follow the guidelines of the United Egg Producers trade group, which are not binding and which many egg farms explicitly reject. This causes incredible pain to hens, who can’t nest properly, suffer abrasions and bruises from bumping into each other, and typically don’t have enough room to turn around.

Gestation crates involve confining mother pigs to fenced-in areas barely larger than their bodies, where they also lack the room to turn around. Ian Duncan, an eminent scholar of animal welfare at the University of Guelph, has described it as “one of the cruelest forms of confinement devised by humankind.”

The problems with CAFOs go beyond animal welfare

But Booker is not promoting his bill through reference to the animal welfare costs of CAFOs. His press release announcing the bill instead emphasizes the negative ramifications of factory farming on humans: the environmental damage it causes through toxic waste pollution (basically, animal shit spewing into the atmosphere where people can breath it), the ways it exacerbates climate change, and the harm it causes to workers and independent farm contractors.

Even animal welfare groups like Mercy for Animals emphasized these factors in its endorsements of the bill, saying, “We believe farmers can and should be part of the change. They know the food and farming system better than anyone, and many of them are as eager as entrepreneurs, activists, and other changemakers to build a better food system.”

This is part of a broader effort to connect the animal welfare, environmental, and workers’ rights movements in fighting against large-scale factory farming. Last month, the American Public Health Association publicly called for a moratorium on new and expanded CAFOs, citing health risks due to the billions of tons of untreated animal waste they produce, as well as the potential of antibiotic resistance emerging in such concentrated facilities.

“There are no sewage treatment requirements for animal manure, in stark contrast to the requirements that apply to human waste management, and the majority of manure from CAFOs is never treated,” according to a recent report from the Natural Resources Defense Council (NRDC). “Low-income and minority populations suffer disproportionately from proximity to CAFO pollution and waste. Localized harms include impaired drinking water, antibiotic resistance, air pollution, and waste spills and associated fish kills.”

CAFO manure can produce E. coli, giardia, listeria, salmonella, and other pathogens. The NRDC report highlights Kewaunee County, Wisconsin, home to a number of CAFOs, where 60 percent of sampled wells contained fecal microbes originating from the farms. The manure also produces air pollution like ammonia and hydrogen sulfide, causing respiratory diseases, chemical burns, heart attacks, and more. “One study found that 46 percent of children living on large swine farms (500-plus swine) had asthma, compared with 26 percent of those living on farms without livestock,” the NRDC report stated.

There are also worries about the impact of CAFOs on contract farmers. There are health concerns related to manure, but the model of CAFO farming places much of its risk on farmers contracted by large packing corporations. In 2017, a group of chicken farmers sued major producers like Tyson Foods, Pilgrim’s Pride, and Perdue Farms, accusing them of “treating farmers who raise the chickens like indentured servants and colluding to fix prices paid to them.” They report being forced to go deep into debt to build giant barns that the companies they work for will not finance.

The farmers also alleged that the major poultry firms have colluded using Agri Stats, a proprietary agricultural data provider, giving themselves a major informational advantage over farmers who don’t have access to Agri Stats. This puts the farmers at a serious disadvantage when negotiating contracts. The chicken companies also allegedly have a no-poach agreement with each other, making it difficult for farmers to raise their wages by flipping to new companies. (All of the targeted poultry companies have denied wrongdoing and are resisting the lawsuit.)

The combined concerns over environmental issues, working conditions, and animal welfare cases brought against CAFOs add up to a powerful argument that is persuading voters in some surprising places: As Tom Philpott at Mother Jones noted, some 63 percent of Iowans supported a moratorium on CAFOs in a recent survey.

Booker’s bill isn’t likely to go anywhere so long as Republicans control the Senate and the White House. But it’s crucial for what it augurs about the politics of factory farming in general. It’s a sign of the deep coalition developing between farmers, animal welfare advocates, and environmental groups to change the food system in ways that help workers, the environment, and animals alike.

2 winners and 3 losers from the third night of the Republican National Convention
There’s a royal wedding today: Princess Eugenie’s
171 countries are teaming up for a Covid-19 vaccine. But not the US.
Trump admits sexual assault allegations against him have affected his defense of Kavanaugh
Massachusetts voters reject ranked-choice voting in ballot initiative
Formaldehyde causes cancer. The EPA doesn’t want to acknowledge it.