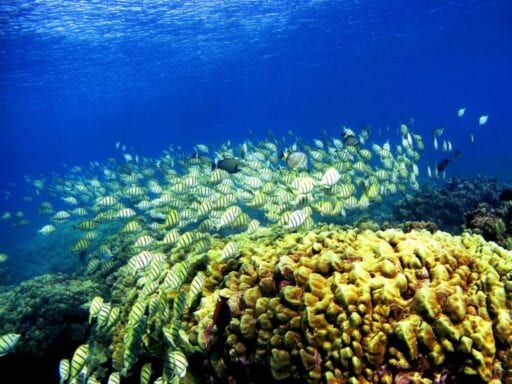 Common sunscreen chemicals oxybenzone and octinoxate have been found to increase coral bleaching.

In the past three years, one-fifth of the world’s coral reefs have died off — and there is a growing awareness that sunscreen is playing a role. From 6,000 to 14,000 tons of sunscreen slide off of humans into coral reef areas each year, exposing the gorgeous underwater ecosystems to chemicals that can kill them.

These coral-rich coastal areas include Hawaii. And that’s why the island state is about to become the first in the nation to prohibit sunscreens that contain oxybenzone and octinoxate, chemicals some scientists and lawmakers say are endangering coral reefs.

According to the bill, SB 2571, oxybenzone and octinoxate “have significant harmful impacts on Hawaii’s marine environment and residing ecosystems, including coral reefs that protect Hawaii’s shoreline.” They kill developing coral, increase coral bleaching (when corals turn white because of stress from changes in their environment), and damage their DNA, states the bill.

Already Hawaii’s reefs are under threat. In recent years researchers have documented unprecedented levels of coral bleaching. In one 2017 study, National Oceanic and Atmospheric Administration scientists found that 56 percent of the Big Island’s coral was bleached, as was 44 percent of West Maui’s corals, and 32 percent of Oahu’s reefs.

Hawaii’s colorful reefs are a major draw for tourists — but they’re also vital for the health of underwater ecosystems. One-quarter of ocean species depend on reefs for food and shelter, according to Smithsonian.

The bill passed by state lawmakers in May would make it illegal for people in Hawaii to sell or distribute the sunscreens (unless they’re for prescription use) beginning January 1, 2021. This week Gov. David Ige, a Democrat, is expected to sign the bill into law.

Most sunscreens on the market, including popular brands like Coppertone and Banana Boat, have oxybenzone and octinoxate as listed ingredients. Sunscreen companies are claiming, through their trade association, that the ban will make it difficult for people to protect themselves from the sun’s harmful effects. But there are pretty easy ways to find “reef safe” sunscreens. Here’s why you’d want to.

Global warming is the main reason that coral reefs are dying — but sunscreens play a role, too

First, while sunscreens appear to be toxic to underwater ecosystems, they’re far from the only threat to coral reefs. Increased ocean temperatures as a result of global warming represent the major reason coral reefs are dying around the world, as Brad Plumer reported for Vox. Here’s Plumer:

In normal times, the living coral polyps form a symbiotic relationship with zooxanthellae, a colorful type of algae that synthesizes sunlight and carbon dioxide to create nutrients for the reef. This algae gives the coral its purple and gold colors.

But this symbiosis only thrives within a fairly narrow temperature band. If the water in the reef gets too warm, the zooxanthellae’s metabolism goes into overdrive and starts producing toxins. The polyps recoil and expel the algae from their tissue, leaving the coral with a ghastly “bleached” appearance. At that point, the coral loses a key source of food and becomes more susceptible to deadly diseases.

In addition, the carbon dioxide we’re adding to the atmosphere makes oceans more acidic, and that can render corals more sensitive to bleaching.

According to the US Environmental Protection Agency, coral reefs are also incredibly vulnerable to overfishing and coral harvesting as well. Coastal development and boat activity jeopardize their health, too.

That’s why, as reef scientist Jörg Wiedenmann told Nature, “Banning sunscreen will not solve other problems: for example, temperature anomalies, overfishing, coral predators and the big issue of coastal runoffs that pollute and destroy reefs.”

But Wiedenmann said in locales with lots of travelers, sunscreen chemicals might pose additional harm. And tons of sunscreen washes off humans who are swimming in the ocean every year — with tourist-heavy reef areas in Hawaii and the Caribbean particularly affected, the New York Times reported, noting the following:

In 2015, the nonprofit Haereticus Environmental Laboratory surveyed Trunk Bay beach on St. John, where visitors ranged from 2,000 to 5,000 swimmers daily, and estimated over 6,000 pounds of sunscreen was deposited on the reef annually. The same year, it found an average of 412 pounds of sunscreen was deposited daily on the reef at Hanauma Bay, a popular snorkeling destination in Oahu, [Hawaii] that draws an average of 2,600 swimmers each day.

So, while mitigating the accumulation of greenhouse gases in the atmosphere is key to reduce further ocean warming, environmental advocates want to find other ways to decrease the risk of coral reef harm, including limiting sunscreen chemicals.

If the bill is passed into law, starting in 2021, people in Hawaii won’t be able to find popular products (like Banana Boat or Coppertone) that contain the environmentally harmful chemicals, unless the major sunscreen manufacturers reformulate their products by that time.

For now consumers who want to protect their skin without harming corals need to look for “reef-safe” products that are biodegradable, contain mineral sunblocks (with zinc oxide and titanium dioxide) instead of chemical blockers, and without nanoparticles and thus designated “non-nano.” Wirecutter studied several options, and determined Thinksport SPF 50+ Sunscreen had ingredients that environmental scientists would approve of. The Times recommended TropicSport and Raw Elements.

You can also use as a guide this checklist from nonprofit scientific outfit Haereticus Environmental Laboratory of known environmental pollutants — and make sure the sunscreen and cosmetics you use don’t list them as ingredients:

When it comes to skin protection, you want to look for “broad spectrum” products, which means you’re getting both UVA and UVB protection. And as for the SPF level, most dermatologists (and the American Academy of Dermatology) recommend going for a level of at least 30.

The Floyd family confronted the Minneapolis police chief on air
The folks behind Ant-Man and the Wasp on why Marvel doesn’t always have to save the world
Why prediction markets are bad at predicting who’ll be president
What the hell is going on with the State of the Union, explained
The Invisible Man gives a classic horror story new life in a fable about abusers
Poll: In 48 GOP districts, voters think Republicans are “more corrupt” than Democrats