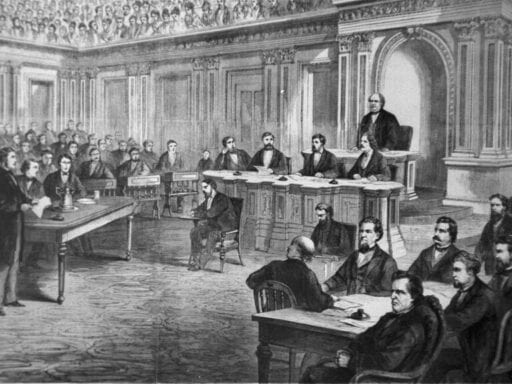 Share
Loading...
An engraving showing the impeachment trial of President Andrew Johnson in the Senate on March 13, 1868. | Library of Congress/Getty Images

Abuse of power may not be a crime. But it absolutely a high crime and misdemeanor.

“I’m a former prosecutor, and what I know is this is a perfect time for a preliminary hearing, where you would say, ‘Show us your evidence. What evidence of a crime do you have?’” former acting Attorney General Matthew Whitaker told Fox News. “I mean, the Constitution, you know, sort of — abuse of power is not a crime.”

Whitaker’s argument is simple enough. Article II, Section 4 of the US Constitution details the impeachment power, and it reads short and sharp. “The President, Vice President and all civil Officers of the United States, shall be removed from Office on Impeachment for, and Conviction of, Treason, Bribery, or other high Crimes and Misdemeanors.”

Matthew Whitaker: Abuse of power is not a crime pic.twitter.com/IJsEwRTs8N

To modern ears, “high crimes and misdemeanors” is a weird phrase. Isn’t a misdemeanor, by definition, a minor infraction? As Judge Richard Posner wrote in his book An Affair of State: The Investigation, Impeachment, and Trial of President Clinton, the formula, read according to modern definitions, collapses into incoherence: “either ‘high Crimes and low Crimes’ or ‘high Crimes and high low Crimes.’”

Which is a clue that modern definitions are not sufficient. We have to go back to what the words meant when they were added to the Constitution, and how they’ve been interpreted throughout US history. In that light, the conclusion is inescapable. Abuse of power may not be a crime. But it is, indisputably, a high crime and misdemeanor.

How “high Crimes and Misdemeanors” made it into the Constitution

In his excellent study “Indispensable Remedy: The Broad Scope of the Constitution’s Impeachment Power,” the Cato Institute’s Gene Healy traces the constitutional arguments that led to the final formulation.

The first question was whether there should be an impeachment power at all. Some delegates opposed it, but their objections were quickly dispatched. “No point is of more importance than that the right of impeachment should be continued,” George Mason said. The issue at hand, he said, wasn’t merely, “Shall any man be above Justice?” It was whether “that man be above it, who can commit the most extensive injustice?”

The next question, then, was on what grounds impeachment would be merited. A number of formulations were proposed and rejected. “Malpractice or neglect of duty.” “Mal- and corrupt administration.” “Treason, bribery, or corruption.” “Neglect of duty, malversation, or corruption.” Eventually, the 11-delegate committee charged with the section offered the narrower “Treason, or bribery.”

As the delegates considered this, Mason argued that “attempts to subvert the Constitution may not be treason,” and proposed adding “maladministration.” James Madison replied that maladministration was too “vague,” leading Mason to withdraw the suggestion, and replace it with “high crimes and misdemeanors.” The suggestion passed, 8 votes to 3.

But was high crimes and misdemeanors truly less vague than maladministration? As Healy notes, in the Commentaries on the Laws of England, a legal reference book that Madison said was “in every man’s hand” at the Convention, the first example given of a “high misdemeanor” was, yes, maladministration. And later, as a member of Congress, Madison would argue that the president could and should be impeached for the “wanton removal of meritorious officers.”

There are two lessons to be drawn from this history. One is it’s a reminder that the men who wrote the Constitution were just men. They were packed in hot rooms, sitting through long meetings, trying to find compromises that would win over a majority of their colleagues. The Constitution was written by committee, and documents written by committee often sacrifice clarity for consensus.

But the bigger lesson is that “misdemeanors” did not mean then what it means now. In 1828, Webster’s defined it as “ill behavior; evil conduct; fault; mismanagement.” It wasn’t a light crime, but an abusive act.

What “high Crimes and Misdemeanors” has meant through American history

The first federal official ever removed from office under the impeachment clause was Judge John Pickering, in 1803. Pickering was an alcoholic and likely suffered from early-stage dementia. He would rant and rave from the bench. The official charges held that Pickering exhibited “loose morals and intemperate habits” and presided over court “in a state of total intoxication,” neither of which sounds like a high crime or misdemeanor to modern ears. He was convicted on all counts and removed from office.

In his 1833 Commentaries, Supreme Court Justice Joseph Story concluded that impeachment is “of a political character” and can be triggered by “gross neglect, or usurpation, or habitual disregard of the public interests, in the discharge of the duties of political office.”

This has continued through to the modern day. A 2015 Congressional Research Service report surveyed every House impeachment in American history and concluded that “less than a third have specifically invoked a criminal statute or used the term ‘crime.’”

In 1974, as the House Judiciary Committee prepared for the Nixon impeachment, it released a report surveying past impeachments, and concluded that the behavior Congress has traditionally considered impeachable fell into three categories:

This is not as helpful as it might be. Most modern presidencies have arguably exceeded the constitutional bounds of the office. Numbers two and three are judgment calls as well. The best the House Judiciary Committee could do was embrace the ambiguity. “The longing for precise criteria is understandable,” they wrote, but misguided. When it comes to presidential misconduct, “the crucial factor is not the intrinsic quality of behavior but the significance of its effect upon our constitutional system or the functioning of our government.”

Pause on that for a moment. “The significance of the effect.” A similar idea shows up in the definitions other legal scholars offer, too.

In Impeachment: A Citizen’s Guide, Cass Sunstein says that the impeachment power applies to the “egregious violation of the public trust while in office.”

In Impeachment: A Handbook, Charles Black Jr. says high crimes and misdemeanors describe offenses that “so seriously threaten the order of political society as to make pestilent and dangerous the continuance in power of their perpetrator.”

In To End a Presidency, Laurence Tribe and Joshua Matz write, “impeachable offenses involve corruption, betrayal or an abuse of power that … risk grave injury to the nation.”

When I asked Gene Healy for his simplest definition, he said, “High crimes and misdemeanors are serious misconduct that demonstrates in officials unfitness to hold high office or to wield power.”

In Federalist 65, Alexander Hamilton argues that impeachment concerns abuses primarily “political” in nature. It’s easy to read that as a tautology: Of course a politician’s offenses will be political in nature. A clearer way to put his point is that impeachable offenses are those that endanger the political system itself.

The point of impeachment isn’t to punish the president but to protect the political system. Offenses that endanger the system — that undermine elections, that corrupt the functions of government, that break constitutional boundaries — cannot be left to elections because they warp elections.

That is, of course, what we are seeing today. Donald Trump’s plan was explicitly to force a statement from the president of Ukraine saying that his political rival Joe Biden was under investigation for corruption. If the scheme had worked — and it nearly did — the election itself would have been compromised. When Black spoke of offenses that “so seriously threaten the order of political society as to make pestilent and dangerous the continuance in power of their perpetrator,” this is the kind of offense he described: an act that forces us to doubt the nature of elections so long as the perpetrator is a participant.

This is why abuse of power is precisely the kind of offense that counts as a high crime and misdemeanor, whether or not the abuse in question is criminal: There is nothing more corrosive to systems of government than permitting officials to abuse power in order to amass power. When that is permitted, systems quickly crumble into autocracy.

The Founders saw that clearly. Will we?

• There is a related argument over whether Trump‘s actions with Ukraine count as bribery. At Lawfare, Ben Berwick, Justin Florence, John Langford make the case that they do. At Politico, Renato Mariotti makes the case they don’t.

• The first episode of my new podcast — Impeachment, Explained — features Gene Healy and will appeal to anyone who has made it this far into a high crimes and misdemeanors explainer. Subscribe through Apple, Spotify, Stitcher, or wherever you get your podcasts.

Emoji reveal more about you than you think
A European airline shuttered abruptly, stranding travelers. Here’s why budget companies are struggli...
The US should prioritize reopening schools, not salons and restaurants
Congress couldn’t agree on what exactly was wrong with Mark Zuckerberg. But they all wanted a piece ...
Trump changed the electoral map; new polling shows it’s changing back
Who’s going to win the Nevada caucuses, according to the polls