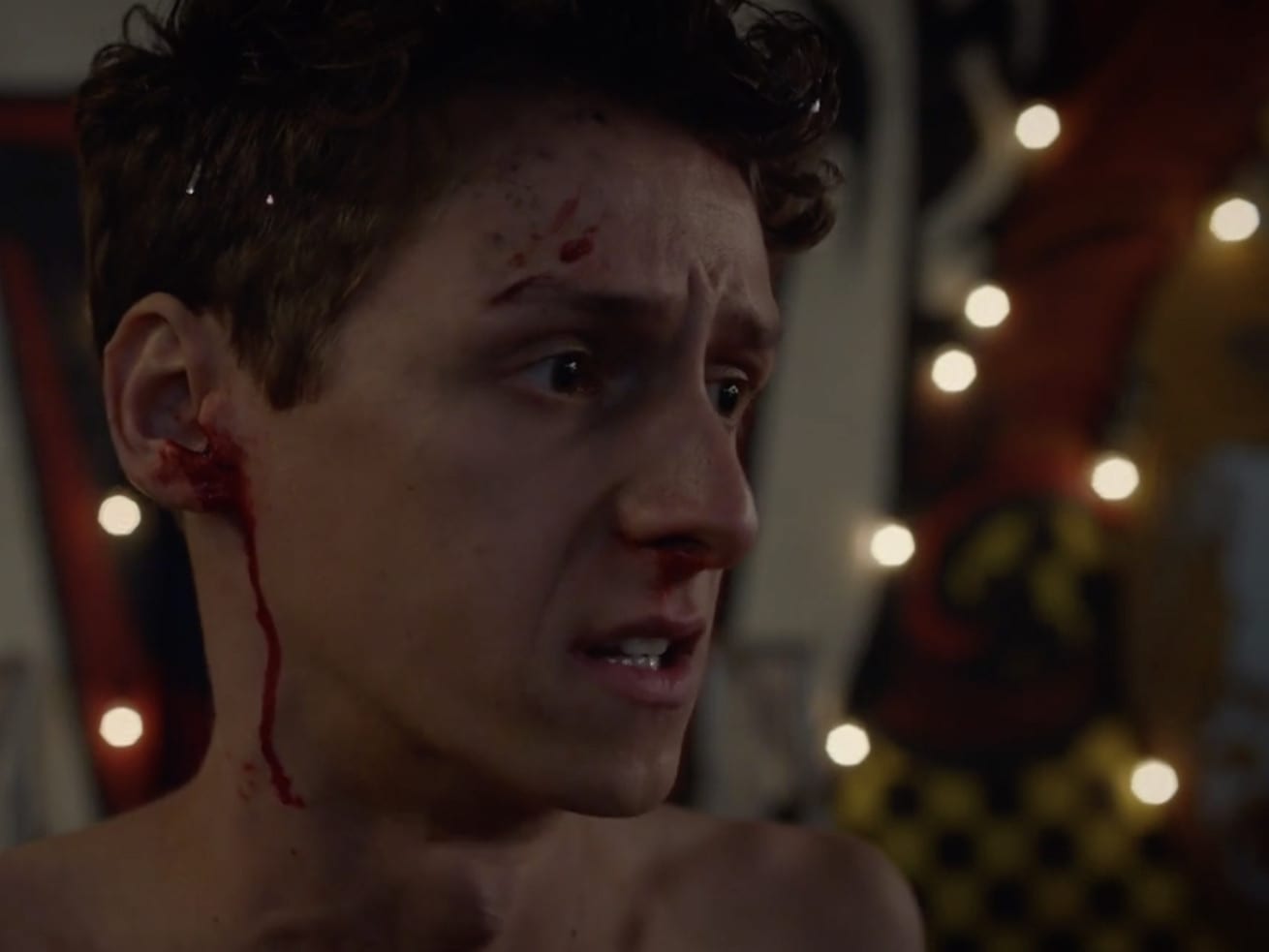 Watchmen’s fifth episode is about gods, monsters, and a psychic squid.

The fifth episode of Watchmen takes us back to the ’80s — the age of hairspray, leather jackets, Howard Jones’s hit “Things Can Only Get Better,” the Cold War, and, in this universe, a psychic squid attack.

The 1980s-era of the Watchmen world is seen through the eyes of Looking Glass, the stalwart police officer with a mirrorball face and the uncanny ability to tell when people are lying. We meet him as a teen trying to promote the good word of Doomsday, how the end is near, and how God has pandas in heaven. To Looking Glass’s chagrin, the apparent apocalypse comes sooner rather than later, and he plays witness to mass death, destruction, and disorder in the form of a genocidal squid storming his local fair.

Though the squid attack is indeed bizarre (director Zack Snyder nixed the cephalopod assault from his 2009 cinematic adaptation, for example), it’s part of the most important question in writer Alan Moore and artist Dave Gibbons’s graphic novel: Who holds accountable the most powerful people, and what decisions will they make when they’re left unchecked?

Looking Glass finds out the answers to these questions first-hand. He watches a recording of the space-bound billionaire Adrian Veidt, a.k.a. Ozymandias, a.k.a. the villain of the Watchmen graphic novel, who explains that the squid was a fake attack for the better of the nation. Veidt claims responsibility for the scarring event, and Looking Glass learns that Americans are just statistics and disposable figures to the very powerful, including Veidt and the government. And through his revelation, the viewer learns that the ultra-violent squid attack in Watchmen, like everything in Watchmen, means so much more than what it originally seems.

The squid attack is about theology, morality, and choosing between one evil or another

The Watchmen graphic novel encompasses a variety of strange elements, ranging from an omnipotent blue man who prefers to be naked all the time to the power politics at play in the United States and Great Britain in the 1980s (which we’ve come to associate with Ronald Reagan and Margaret Thatcher). But the most challenging bit comes at the end of the novel, forcing us to examine our own ideas about morality and humanity — and that would be the squid attack.

In the final chapter of the comic, Adrian Veidt, a.k.a. Ozymandias, unleashes a colossal alien squid upon New York City. He sees it as the only way to keep the world’s superpowers from killing each other in a nuclear war. Ozymandias’s plan wasn’t without its supporters, either. Moore writes the story in a way that gives Ozymandias intellectual authority, and as such, other heroes (like Doctor Manhattan) go along with him.

The squid, with a brain cloned from a human psychic, releases a shockwave that instantly kills millions. Those who survive the shockwave go mad and are driven to violence by the sensory overload. In the novel, World War III: Nuclear Party Time is inevitable, and Ozymandias’s plan works. Countries around the world, including Russia, see the terror in New York City and offer support to the United States, burying any simmering political hostilities until the horrors are stopped.

With the plan and the people executed — and the story’s heroes unable to undo what Ozymandias has wrought — everyone who had learned about the plan beforehand is faced with a moral dilemma: Tell people about the mass murder Ozymandias committed and inevitably trigger nuclear war, or remain quiet about the fact that the genocide was man-made. Only Rorschach, the most obstinate of the heroes, doesn’t go along with the cover-up.

Though Rorschach sticking to his morals is noble — lying to people about millions of deaths is unconscionable — the situation is positioned in such a way that if he spills the truth, it will inevitably wreck the fragile peace Ozymandias achieved. In order to prevent that from happening, Doctor Manhattan obliterates Rorschach in the name of the greater good.

The result is two unappealing choices for who is right: the unapologetic, objectivist moralist who risks armageddon based on what he believes to be “good,” or the clinical amorality of a genius utilitarian who kills millions of people to achieve harmony. There’s no simple nor tidy answer, especially with the stakes heightened to the point where Rorschach’s noble deed seems detrimental and Ozymandias’s “saving” the world seems moot. And perhaps the greatest lesson here is not that these are the only two choices, but rather that people should be wary of relinquishing personal responsibility to those in power.

At the end of the comic, world peace has been restored. But The New Frontiersman newspaper (which has been referenced in the HBO adaptation) obtains Rorschach’s journal, and it’s implied it will publish Rorschach’s thoughts and observations of his investigation into Ozymandias’s scheme. What we don’t see fleshed out in the original graphic novel is the aftermath of how the attack changes the lives of everyday people, the ones who aren’t privy to the knowledge that the attack perpetrated on them was a hoax.

HBO’s adaptation examines, through Looking Glass’s story, at least one perspective of that. Unlike the heroes in the graphic novel, Looking Glass witnesses the attack firsthand in Hoboken. It shakes him to his core, and today he lives with a type of PTSD and fears the potential for another attack, hence the emergency alarm system and drills in which he’s invested. For Looking Glass, each day is spent revisiting the attack and dreading that it may happen again — a stark allegory for Americans who still remember 9/11 and its immediate aftershocks.

But episode five is not the first to reveal the lingering effects of the giant squid attack.

In the first episode of the series, Angela’s son Topher’s classroom displays a poster touting squid anatomy alongside one depicting America’s presidents, indicating that squids are still very important in this world, and all across the country at that. In the same episode, Angela and Topher drive home from school and pull over when they hear an alarm. Out of nowhere, several dead squid suddenly fall from the sky — or possibly from another dimension. This appears to be another connection to the squid attack of 1985, perhaps a direct result of it.

Topher sees the “squid falls” as little more than a gross nuisance. We haven’t yet seen Looking Glass’s reaction to the event, but judging from how serious he is about the alarms and how worried he is about another attack, I doubt that he’s able to just brush those squids off.

Knowing the backstory of the fake squid attack changes the complexion of the squid falls. We know the squid assault was fake, so presumably the squid falls are fake, too. So what’s their purpose? Who’s orchestrating the squid falls? And what benefit is there to arranging said squid falls?

I’m guessing the squid falls are a government act, as it’s difficult to imagine someone being able to pull off that kind of scheme. I could also see it being Lady Trieu, since she has the resources and money to accomplish such a grand feat.

Regardless of who is orchestrating the squid falls, they manage to keep the ’80s squid attack on people’s minds. The squid falls send the message that there’s danger looming, that the government and military could be the only things standing between you and another attack — which is, essentially, Ozymandias’s end goal in the graphic novel.

And if the squid attacks are used to get people to trust authority figures in this world, it doesn’t seem like much of a stretch to believe that the people in Tulsa, Oklahoma, should be wary of any authority figure’s power.

What’s a little less clear is how Sen. Joe Keene factors into the big reveal, when Looking Glass learns the attack was a hoax courtesy of Ozymandias. Keene’s planning something, but at this point, his endgame is still a bunch of moving pieces — a teleportation device, Ozymandias’s recording, framing Angela.

What we do know is that this revelation destroys everything Looking Glass thought he knew about the attack that changed his entire life. Finding out it was a hoax, that his whole life has revolved around this fake attack, is shattering. Just like the end of the graphic novel, Looking Glass is now in Rorschach’s position of keeping a secret that could change the world for the worse. The question becomes what he will — or won’t — do with this knowledge.

Congress just passed a bill that will guarantee free coronavirus testing for all Americans
The world’s scariest facial recognition company is now linked to everybody from ICE to the NBA
A Sanders rally shows Democrats will have to decide what to do about “lock him up” chants
Pete Buttigieg has been criticized for his handling of policing. He hopes his criminal justice plan ...
GOP presidential hopeful Mark Sanford is running against Trump to talk about the national debt
Republicans now like the FBI less than they like the EPA