Joe Biden explains why he flipped on the Hyde Amendment 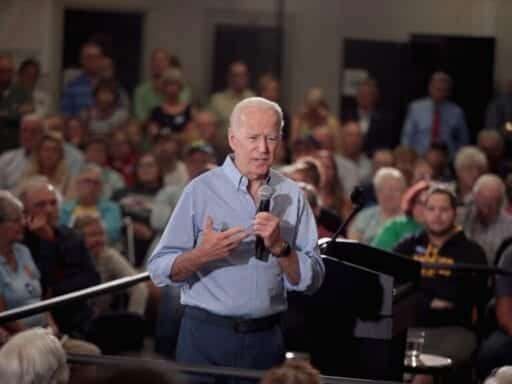 He broke down why he changed his mind on a long-held position on abortion.

Until a few weeks ago, former Vice President Joe Biden was a staunch supporter of the Hyde Amendment. The amendment, first approved by Congress in the 1970s, prohibits the use of Medicaid dollars for abortion in almost all cases. In the wake of immense criticism over his stance on the policy, Biden reversed himself this June. He now opposes the amendment, taking on a position on abortion rights that’s shared widely across the 2020 Democratic field.

During a forum for presidential candidates held by Planned Parenthood in Columbia, South Carolina on Saturday, Biden sought to explain why he flipped on this subject.

“I laid out a health care plan that’s going to provide federally funded health care for all women and women who now are denied even Medicare in their home states,” he said. “It became really clear to me that although the Hyde Amendment was designed to try to split the difference here, to make sure women still had access, you can’t have access if everyone’s covered by a federal policy. That’s why at the same time, I announced that policy, I announced that I could no longer continue to abide by the Hyde Amendment, that’s the reason.”

In his response, Biden seems to suggest that he changed his position on the Hyde Amendment because of how much his health care proposal would expand Medicare and Medicaid coverage. If more people were covered by federally funded health care as Biden described, the Hyde Amendment would effectively limit their access to abortions, since federal money for such procedures is heavily restricted.

Biden said he believes repealing the Hyde Amendment is the only way to promote an expansive health care plan funded by federal money that does not also curtail women’s access to abortions.

While his explanation makes sense, it also obscures a major reason that the Hyde Amendment has been so widely opposed in the first place. By Biden’s logic, because his plan would cover more people, the Hyde Amendment has to go. But the Hyde amendment already affects Americans on Medicaid, who are disproportionately low-income and people of color, which is why reproductive health advocates have long argued for its repeal. Biden’s response doesn’t fully engage with this argument. He has, however, previously acknowledged that Hyde affects millions of women’s access to health care.

Biden’s explanation on Saturday seems to suggest that he altered his stance on the issue primarily because of a potential shift that could result from his own health care proposal. This adds additional context to the rationale Biden offered for changing his mind on Hyde when he first announced his new stance on the amendment. At that time, he suggested a spate of state laws limiting abortion access were behind his decision.

Biden’s health care proposal isn’t the only one that’s tied to an elimination of the Hyde Amendment. Medicare-for-all, a plan backed by progressives and championed by several candidates including Sen. Bernie Sanders, would undo the Hyde Amendment if it became law.

2020 Democrats want to repeal the Hyde Amendment, but Congressional lawmakers keep approving it

Repealing the Hyde Amendment is a position that’s commonly held among the 2020 Democratic candidates, but it’s an effort that’s been difficult for Democrats to actually implement in Congress.

Most recently, the Democratic-controlled House approved a slate of funding bills that still contained the Hyde Amendment, and they did so for one major reason: Without the Hyde Amendment, Senate Republicans wouldn’t pass the spending bills and President Donald Trump wouldn’t sign them, increasing the risk of another government shutdown.

“You know, we are where we are,” Congressional Progressive Caucus co-chair Pramila Jayapal said earlier this month, NPR reports. “People don’t want to throw that into an appropriations bill that has to go to a Republican Senate and be signed by a Republican president.”

The election of a Democratic president could be a major step to eliminating Hyde, though such efforts would likely still need the support of a Republican-controlled Senate. Biden’s recent flip, however, suggests that most of the candidates — and all of those at the top of recent polls — are now on the same page about the need to get rid of the amendment.