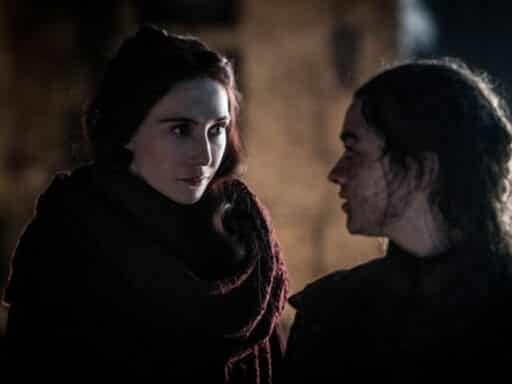 Melisandre’s appearance at the Battle of Winterfell introduced a wrinkle into the “Prince That Was Promised” prophecy.

This post contains spoilers regarding the third episode of Game of Thrones’ eighth season.

Right before Game of Thrones’ epic Battle of Winterfell in “The Long Night,” Lady Melisandre — Westeros’s most mysterious, crimson-wearing magic-wielder — returned after a departure early in in season seven.

In the episode’s opening minutes, Melisandre arrives seemingly out of nowhere and blesses the Dothraki arakhs, setting them ablaze before they take on the White Walkers. Later in the episode, she sets the trench around Winterfell ablaze with her magic, helping to hold back the hordes of wights and White Walkers and aiding the Living’s retreat. And finally, at the end of the episode, she dies, collapsing into the snow.

Melisandre’s appearance marked a stunning return and final chapter for the character, who has been one of the most morally beguiling and odder individuals on the Game of Thrones roster. It was also a callback to her fidelity to a prophecy called “The Prince That Was Promised,” which foretold the rise of one true savior who now seems to be Arya Stark.

Melisandre knew how important Daenerys, Jon, and Arya were to defeating the Night King — and showed up to support them

The most curious thing about Melisandre, a.k.a. the Red Woman, is how little we know about her. But what little we do know is super important: She is centuries old, and her mission on Game of Thrones was to find the savior who would defeat the Night King.

In the show’s season six premiere, “The Red Woman,” it was revealed that Melisandre was actually much older than she appeared. Thanks to a magic crimson amulet she wore around her neck, Melisandre looked like a glamorous 30-something-year-old woman (the actress who plays her, Carice van Houten, is 42) but when she took it off, we could see she was fully elderly. According to a 2012 interview with van Houten, “she’s way over 100 years” old; indeed, showrunner David Benioff said during the season six premiere’s “Inside the Episode” aftershow that Melisandre is “several centuries old.”

At the end of “The Long Night,” Melisandre takes off her amulet once the Battle of Winterfell is over and the Army of the Dead have been defeated. The red gem in it dims. And as that happens, Melisandre reverts to her true centuries-old form, with her mission accomplished, her watch over, and her magic used up, and accepts death.

Another thing we know about Melisandre is that she possesses magic and is a devout follower of the religion known as the Lord of Light. In that religion, as depicted both on Game of Thrones and in the books on which it’s based, there’s a prophecy called “The Prince That Was Promised” that tells of a savior (who will be the reincarnated hero Azor Ahai) who will save the living from the Long Night a.k.a. the Night King and his unstoppable forces.

George R.R. Martin’s novels flesh out the “Prince That Was Promised” prophecy and its mythology much more than the show has done, but it’s important to treat the show’s depiction — which is a little more vague and succinct about who will save the Living from the Night King — as a separate entity mainly because the show has bypassed the books.

And throughout the show, Melisandre has followed who she believes to be that Prince or Princess — beginning with Stannis Baratheon, and then after his death, Jon Snow and Daenerys Targaryen.

In Game of Thrones’ seventh season, Melisandre visits Daenerys, to tell her about how she believes Dany and Jon are key to this prophecy.

“The Long Night is coming,” Melisandre tells her. “Only the prince [prince or princess, according to Missandei’s translation] who was promised can bring the dawn … I believe you have a role to play, as does another — the King in the North, Jon Snow.”

However, it’s not actually Dany or Jon who ended up killing the Night King. That honor went to Arya Stark, not long after Arya had her own strange encounter with Melisandre.

Back in Game of Thrones season three, Melisandre and her gang run into Arya, Gendry, and the Brotherhood Without Banners. Melisandre “buys” Gendry from the Brotherhood because she believes his blood is key to helping Stannis Baratheon. But Arya won’t let Gendry go without cursing Melisandre. It’s then that Melisandre looks into Arya’s eyes, and tells Arya that she sees death in Arya’s future.

“I see a darkness in you,” Melisandre tells Arya. “And in that darkness, eyes staring back at me: brown eyes, blue eyes, green eyes. Eyes you’ll shut forever. We will meet again.”

This encounter has long been interpreted to serve as foreshadowing of Arya’s future turn as an adept assassin. But in the context of the Battle of Winterfell, the “blue eyes” that Melisandre mentioned now seemingly refer to those of the White Walkers and the Night King himself. Melisandre and Arya revisit that season three moment when they meet during the Battle of Winterfell, and Melisandre gives Arya a pep talk, reminding her of the “blue eyes” detail. The episode also sees Beric Dondarrion, who is a devout follower of the Lord of Light, sacrifice himself so that Arya might live.

All of this — Beric’s sacrifice, Arya killing the Night King, Melisandre’s pep talk and eventual death — seemingly signals that Arya could be the reborn savior that the prophecy was centered on. But it’s not that simple.

“Prophecies are dangerous things,” Melisandre told Daenerys in their season seven encounter, warning that prophecies are never crystal clear and often not what they seem. And unfortunately, as she appeared to die for good at the end of “The Long Night,” she will no longer be around to further advise on what the future might hold.