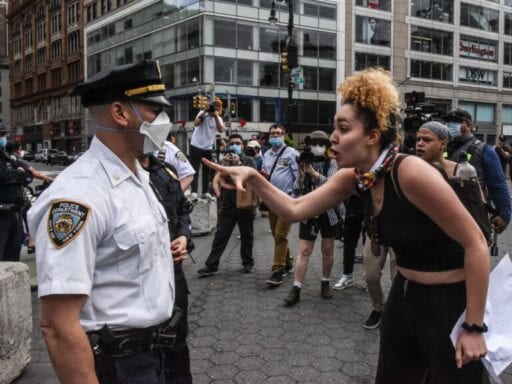 The officer pinned down Floyd by the neck with his knee as the black man yelled, “I can’t breathe!”

Derek Chauvin, the Minneapolis police officer who pinned down George Floyd, has been taken into custody and charged with murder and manslaughter, Hennepin County Attorney Mike Freeman announced on Friday.

Video of the incident showed Chauvin pushing down on Floyd’s neck with his knee as Floyd yelled, “I can’t breathe!” As onlookers complained of the police’s use of force, Floyd went silent and his body went limp — and he died.

The three other officers in the case are still being investigated, Freeman said. He said that the initial charges are intended to focus on the “most dangerous perpetrator.”

All the officers were previously fired after Floyd’s death.

Floyd’s death set off protests and riots in Minneapolis throughout the week, with some protesters burning down buildings and looting stores. Gov. Tim Walz (D) activated the National Guard on Thursday in anticipation of further unrest.

In response to the events, President Donald Trump tweeted that “when the looting starts, the shooting starts” — in a tweet that was later flagged by Twitter for “glorifying violence.”

While Floyd’s killing was the immediate catalyst for the protests and riots, underlying them are deeper resentments about huge racial disparities in policing and use of force.

It’s also very rare for police to be held accountable for police killings. The National Police Misconduct Reporting Project analyzed 3,238 criminal cases against police officers from April 2009 through December 2010. They found that only 33 percent were convicted, and 36 percent of officers who were convicted ended up serving prison sentences. Both of those are about half the rate at which members of the public are convicted or incarcerated.

It’s this combination — of excessive use of force against black Americans and the lack of accountability for police officers — that has led protesters to take up the mantle of “Black Lives Matter” since police killings in Ferguson, Missouri, and Baltimore in 2014 and 2015 led to similar protests and riots as we saw in Minneapolis this week.

The unresolved question now is whether this time will be different — and whether Chauvin, as the police officer involved in Floyd’s death, will be held accountable.