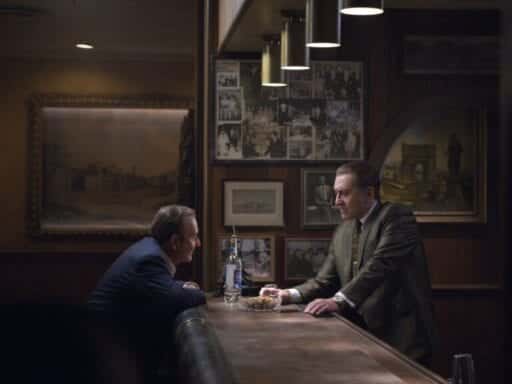 Late in The Irishman, Frank Sheeran (Robert De Niro) says that “you don’t know how fast time goes by until you get there,” and there’s just a twinkle of irony mixed into the melancholy. After all, by then, the movie is past the three-hour mark. (It ultimately tops out at 209 minutes.)

But that’s sort of the point. Time telescopes in Martin Scorsese’s newest movie, shifting back and forth through decades as old, wistful Frank narrates the tale of his life as a hitman for crime syndicate boss Russell Bufalino (Joe Pesci) and then for Teamster boss Jimmy Hoffa (Al Pacino, who has somehow never worked with Scorsese before now). Which of course means the film rightfully will be compared to earlier Scorsese movies, like 1973’s Mean Streets and 1990’s Goodfellas, and not just because of the subject matter; in The Irishman, the director reunites with some of his longest-running collaborators from those films, including De Niro, Pesci, and Harvey Keitel.

Like those two movies — and all of Scorsese’s work, really — The Irishman is also about guilt, sin, and redemption. But with its lengthy runtime, this one has space to lean in two different tonal directions. The Irishman has both the frenetic swagger of his mob movies and the more contemplative gut wrench of his most spiritual films, like 1988’s The Last Temptation of Christ and his most recent film, 2016’s Silence.

And the movie has the maturity of an older man’s perspective, an eye cast backward on a full life. It is lively and wry and very funny, but at times it also feels like a confession, a plea for grace, not just from its protagonist but from the filmmaker himself.

Frank’s story is long and packed full of anecdotes that are always terribly fun, if sometimes aimless. This isn’t one coherent narrative as much as the recounting of a life, with the twists and turns life takes that defy tidy storytelling. It’s crowded with the figures who occupied his attention ever since he was a young man finding his way into Bufalino’s good graces. That happens partly as a result of a chance encounter with his union attorney (Ray Romano), who turns out to be Bufalino’s cousin. His work as a hitman and a fixer with Bufalino becomes a gig as one of Hoffa’s most trusted friends and aides, and Frank’s life is intertwined with both men. For a while, they’re on top of the world. And then — thanks largely to the machinations of history — things start changing for them.

There’s a lot in The Irishman that evokes Scorsese’s earlier work, from the way characters talk and act and dress to the occasional bursts of bloody violence. (Steven Zaillian’s screenplay is based on Charles Brandt’s 2004 book I Heard You Paint Houses, which details what the real-life Frank told Brandt about Hoffa’s infamous 1975 disappearance; Hoffa was pronounced dead seven years later when his body failed to materialize. The titular “paint” on houses is not, well, paint — though it’s certainly red.)

In its first act, the film can be tedious, because it gives very little indication of why exactly we’re watching these men do their thing other than Scorsese thinks we should be. (The purpose does become clear, but in a way that will only reward the patient.) The long runtime — clearly part of the appeal of the film’s eventual home being Netflix, where a movie can be as long or as short as you want, especially if you’re Martin Scorsese — means that scenes have more breathing room than we’re accustomed to seeing. Technically, they could be “tightened” up, perhaps by trimming out some of the dialogue or reaction shots, or removing parts that don’t fit into a more streamlined plot.

But the near-bagginess of the film is part of its initial charm. And by the end, it becomes important. The Irishman’s long arc (which involves the use of largely unobtrusive de-aging technology) means the film follows Frank and his associates long past when the movie usually ends, with triumph or failure. The film instead takes a distinct turn away from rat-a-tat plotting and revenge toward a frankly stunning, contemplative movement. The bluster and scheming of middle-aged men eventually gives way to age, to losing people one by one, and to consequences for life’s choices.

Suddenly, it becomes very important to realize we’ve been listening to Frank narrate his story.

For much of The Irishman, the women are at the margins — wives and daughters, always around, rarely saying anything. This isn’t atypical in Scorsese’s work, which rarely centers on women. The worlds he makes movies about are built by men, for men. They see women as beloved and beautiful accessories, maybe tangentially helpful, sometimes irrational irritations. Sometimes, the woman is just the nuisance who makes you pull the car over every hour on a road trip for a smoke break.

But The Irishman uses Frank’s perspective on the women in his life to remind us that his myopia has blinded him to the truth about himself. One of the stranger parts of Frank’s story is the barely glancing interest — just a line or two — that he gives to leaving his wife for a waitress, and a shrugging explanation he gives to Russell for why his divorce couldn’t possibly be affecting his children. (The two women get along like gangbusters, he says; there’s no problem there at all, see?)

Similarly, the role that Frank’s daughter Peggy (played as a child by Lucy Gallina and an adult by Anna Paquin) plays in the film feels weird, for a while. She’s only one of several daughters, but she’s also the one most important to him. She mistrusts Russell, but she loves Jimmy. Scorsese makes a point of directing our attention toward how Peggy watches her father and his associates, taking in what they’re doing and quietly making her own decisions. But she never, at least in Frank’s memory, tells him what she’s thinking.

So late in the film, when Peggy has stopped talking to her father altogether, Frank asks another daughter (Marin Ireland) to help him reach her. And it’s an eye-opening moment, both for Frank and for us in the audience, who have been watching the story through Frank’s perspective. “You don’t know what it was like for us,” she tells him, visible frustration on her face and tears in her eyes. When he thought he was protecting his daughters, they were afraid to tell him about anything that happened to them lest he mete out swift and excessively violent judgment. And so they were less protected. His perception of himself and of what he was doing for his family didn’t match reality. It was just that: his perception of himself.

That realization, with others, starts to nudge Frank toward something like self-examination. And given Scorsese’s long proclivity toward looking for meaning in Catholic symbolism, Frank’s own Catholicism starts to resurface. The movie’s other unofficial theme might be the Biblical injunction that the wages of sin is death — frequently we’re introduced to a person just long enough for their date and means of death to flash on screen — and when your life is defined by helping others meet their death, you start to get thoughtful when you approach your own. The older Frank gets, the more people he loses, the more he watches the men he once idolized fading away, the more he struggles to understand how his life of murder and extortion squares with the possibility of an afterlife.

He breaks bread and drinks grape juice with Russell (in a scene that’s also reminiscent of a famous Goodfellas scene). He tells a priest that he’s not sure if he’s sorry for anything he’s done, and the priest gently reminds him that we can feel sorry or we can choose to feel sorry. We see the rare flicker of his self-doubt and the guilt he feels for acts of betrayal. And when the priest prays with Frank that God will “help us see ourselves as you see us,” there’s a lot riding on that prayer.

An aging filmmaker with a long, rich, full history of examining crime and sin and death might rightly land on these themes at this point in his career. The final minutes of The Irishman contrast starkly with the start of the film, because that is how our lives play out. What matters at the end is who we loved and how we loved them, and whether we treated them like they mattered. And the film leaves open the question we all face: If we messed that part up, what, in the end, was life really worth?

The Irishman premiered at the New York Film Festival on September 27. It will open in limited theaters on November 1 and premiere on Netflix on November 27.

Sen. David Perdue’s racist treatment of Sen. Kamala Harris’s name was all too familiar
The State Department is telling US tourists that El Salvador is now as safe as Denmark
I will not reopen our church for Trump. I love our congregants too much to risk their lives.
In leaked audio, Sen. David Perdue compares the risks of Covid-19 to car crashes
Trump slashed refugee levels this year. For 2019, he’s slashing them even further.
U.S. lead in aircraft carriers tested by new super ships from China and Russia