Political commentary can be both caustic and incisive. Molly Ivins showed America how. 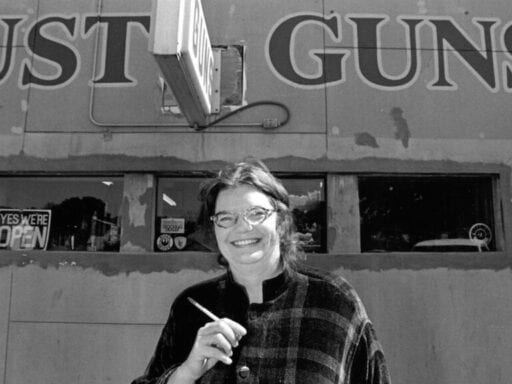 The new documentary Raise Hell: The Life and Times of Molly Ivins explores the famed columnist’s life and legacy.

Molly Ivins was one of America’s most caustic and beloved political commentators. A tall, brash Texan with a knack for a needling phrase and a long-running syndicated national column, Ivins was also known as a serious critical force to be reckoned with by her friends and her foes. She was unabashedly progressive, but her main interest was in holding the feet of the powerful to the fire, no matter their political party; though her critiques as a Texan of George W. Bush were relentless, they came after she’d also refused to participate in the 1996 election over her disillusionment with many of Bill Clinton’s policies.

Ivins had a long career, which took off in the early 1970s when she began as a legislature reporter at the Texas Observer. She was hired away by the New York Times in 1976, where she wrote and worked as the Rocky Mountain bureau chief for six years, before settling as a nationally syndicated columnist at the Dallas Morning Observer, where she was a three-time Pulitzer finalist. She was also a familiar face on TV and the lecture circuit. And when she died in 2007 at the age of 62, her devoted fan base as well as her foes mourned her passing, not least because it felt as if something had been irrevocably lost to the American political scene.

The documentary Raise Hell: The Life and Times of Molly Ivins is a strong, witty introduction to the writer, filled with footage of her quips and tributes from her friends (and a few of her frenemies). It’s an often moving look into an extraordinary life, but it’s also a startling glimpse into a sharply opinionated but somehow less polarized political scene from Molly’s time, and an example of how acerbic commentary needn’t crowd out real conversation.

I spoke with Raise Hell’s director, Janice Engel, by phone after the film’s premiere at Sundance in January. We talked about what she learned from Molly about populism, priorities, and politics. Our conversation, which has been edited and condensed for clarity, follows.

A few people I know actually cried watching this movie! That seems indicative of the world we’re living in — a movie about a warmhearted but still often caustic journalist like Molly Ivins can move people to tears.

Have you found that a lot of people react that way to Molly’s story?

They’re blown away. People are really moved to tears. They miss her voice, because it was such a unique voice. The biggest reaction I hear is, “I didn’t really know who she was, and I can’t believe she’s not here anymore.” I get this so much.

I showed a six-minute cut to my students, who are from all over the world. [Engel teaches at the Academy of Art University in San Francisco.] I’d turn on the light and say, “Too long, right?” And they’d say, “No! Who is she? Oh, my god, she’s fabulous, where can we go see her?”

That’s what I always get. On our Facebook page, the biggest hashtag is #WWMIS — “What Would Molly Ivins Say?” People really get how relevant she is, and how important she was.

She was. She was a Texan!

How did you first encounter Molly’s work?

In May 2012, James Beacon, who I’d known for years, a fellow producer and filmmaker and professor, approached me. For a number of years, we talked about making a film together. He called me one day and said, “I need you to go see this play, Red Hot Patriot: The Kick-Ass Wit of Molly Ivins. It’s starring Kathleen Turner.” I said, “What’s it about?” And he said, “Molly Ivins.”

So I bought the ticket, I went, and I was blown away. The material was Molly’s material — her words. It was brilliant. It was hilarious. I was so intrigued by Molly.

You know when you go to see something, you come home and you start Googling? I Googled! I found all these C-SPAN clips of Molly, and I started to watch them that night, ’til 2 or 3 in the morning. I was blown away. She was hilarious! She was brilliant, and so spot-on.

So I called James the next morning and gave him my reaction. And he said that there were no films or documentaries about her. There was a book, but that’s it. So we reached out to her estate [about making a film].

You can see in Molly the American tradition of barbed satirical political commentary mixed with folksy appeal, as in writers like Mark Twain. Writers like them are great at cutting through the confusion and nailing what’s really happening in politics. But these days, it seems hard to write good political humor, because reality is almost beyond parody. Did you learn anything from Molly about what makes for good political humor while you were working on this film about her?

I’ve learned so much. I was always a progressive, and I’ve always had my opinions on this and that, but Molly put it into historical context for me, in so much of what she wrote and what she said.

And voting, too. I’m a baby boomer. I couldn’t wait to vote. Now I have students who don’t vote. I think that’s changing, thank god. But there’s been a lot of apathy. And when you don’t vote … well, Molly said, “If you don’t vote, you can’t bitch. That’s in Article 27 of the Constitution.” She made a joke, but it’s true.

One thing that’s startling in the context of today is that though Molly was obviously on the left, she often cut across the political spectrum in what she said. She’s a liberal populist in ways that would challenge many liberals and conservatives today. Do you think she has something to say about what real bipartisanship would actually look like?

Oh, yeah. I think she does. She says, “You have to have a good time while you’re fighting for freedom. It might get to be the only fun you ever had!” You can agree to disagree. She used to say, “We used to go to the bar and have a drink.” She hung out with Republicans — that’s how she got schooled! By listening to everybody, and talking to them. She was amused. And she loved these guys. There was no disdain. She loved them, because they’re incredible characters, and they’re a product of where they came from!

Dialogue. We’ve lost that ability. I think that the dumbing-down of America has truly become complete.

She was a progressive populist. These days, populism is often attributed just to the right, but populism is really what Molly was about. I went to Populism U with Molly Ivins, and I learned so much that I didn’t know. It really is about the haves and the have-nots — who’s getting screwed and who’s doing the screwing. That’s when [Molly’s] pitchforks come out. You destroy the middle class, you destroy the democracy!

It was interesting to watch your film next to other movies about significant media figures of the last half-century or so, like Roger Ailes or Roger Stone. Both of them succeeded by figuring out how to monetize sensation, how to grab headlines by being outrageous or scaring people. It seems like Molly could have also tried to be a sensationalist, but she went down a different route, as a writer and a thinker. Why do you suppose that is?

Raise Hell: The Life and Times of Molly Ivins opens in select theaters in Texas on August 28, and begins rolling out nationally on September 6. Check the website for cities and ticket information.

Trump wants everyone to know he is extremely calm and Pelosi is the “crazy” one
How we work out together now
The appeal of the TikTok everyhouse
The legal scholar who shaped Trump’s coronavirus response defends his theory
Team Trump’s efforts to spin Mulvaney’s quid pro quo confession are not going well
BTS, the band that changed K-pop, explained