Poll: only 32 percent of Republicans think Russia interfered in the 2016 election 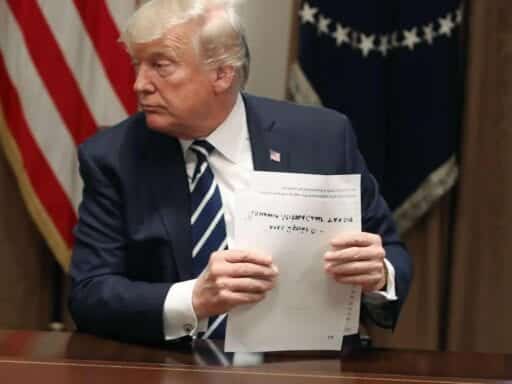 Trump’s opinions appear to be trickling down to his base.

Republican lawmakers have pushed back against President Donald Trump’s deference in Helsinki to Russian leader Vladimir Putin’s assurances that Russia did not meddle in the 2016 election.

But it seems that GOP voters might agree with Trump — and that opinions about Russian interference are highly polarized.

According to an Ipsos/Reuters poll, the majority of Americans think that Russia did interfere on behalf of Trump. About a third of all Americans — 34 percent — strongly agreed, and another 22 percent somewhat agreed, for a total of 56 percent

But whether Americans think Russia interfered in the election has a partisan bent. Only 10 percent of Republicans strongly agree that Russia attempted to interfere in the 2016 election on behalf of Trump. Another 22 percent somewhat agreed with that statement.

On the flip side, 31 percent of Republicans strongly disagree that Russia got involved on behalf of Trump, with another 19 percent “somewhat” disagreeing.

That’s compared to 58 percent of Democrats who strongly agree that Russia tried to interfere, and 23 percent who somewhat agree. (A mere 2 percent strongly disagreed.)

The US intelligence community concluded in a 2017 assessment that Russia tried to interfere in the 2016 election to help Trump and hurt Hillary Clinton; they did not evaluate whether it influenced the outcome of the election.

But the fact that many Americans seem to doubt that US intelligence agencies’ conclusion — and the split appears along party lines — indicates that Trump’s reluctance to support the intelligence findings may have trickled down to his supporters.

Trump later backtracked on his remarks from the Putin press conference, saying he misspoke when he said he didn’t see any reason why Russia would have interfered. But his frequent attacks on special counsel Mueller’s probe likely sow doubt about Russia’s role, including the recent allegations against 12 Russian military officers accused of hacking the Democrats and election infrastructure during the 2016 election.

Indeed, 40 percent of Republicans strongly agree that the Justice Department should immediately end the special counsel’s investigation into Russian meddling, compared to 11 percent of Democrats, according to the Ipsos/Reuters poll, which surveyed 1,520 adults from July 16 to 17.

The risks in going to the gym during the coronavirus pandemic, explained by experts
Critical race theory, and Trump’s war on it, explained
Birtherism 2.0, explained
President Trump says Republicans should 'stop wasting their time on immigration' until aft...
Here’s the full list of 2020 Oscar nominees
Ed Whelan’s tweets have created a second Kavanaugh scandal